Christmas is only a week away, and despite everything that's not getting done this year I'm getting  into the spirit of the season.

As usual, work has been brutal. Longer hours, crowds of harried, demanding customers, huge shipments of merchandise, a store utterly wrecked each night, and much larger sums of money to deal with every day wears one down quickly.

This year, I've given up on baking and cooking from scratch. Most of our holiday feasting will be on nice but store-bought goodies. Our house has minimal decorations. Just a lighted bough on the mantle, and Christmas candles scattered around the house. I haven't had the  time to do more, what with my dad's recent health issues. There's no one else to help my parents out, so I've been getting them to appointments and being there for moral support on my days off.

Dad had a heart catheterization on Tuesday, and to our surprise and relief,  he had no blockages in his arteries. They still need to figure out why he's having problems, but we're so happy to know that his heart is healthier than we expected. The good news was like an early Christmas gift.

Wednesday night was my book club's holiday gathering.  We read The Christmas Pearl by Dorothea Benton Frank for the month of December, which was, frankly, terrible. As one of the other members observed, "It was like a sappy Lifetime movie". No one liked it very much, but we did have a really nice little party. Everyone brought a dish or dessert  (I bought fruitcake cookies at a bakery because of lack of time) and there was plenty of wine. The food was wonderful, and once the wine started to flow everything began to be quite merry!

After we talked about the book, everyone shared a Christmas tradition they either follow today or had growing up. My friend Marian shared one I'd never heard of. She grew up in the Northeast where it's traditional to burn bayberry candles on Christmas eve, and there's a rhyme to go along with it:

"The candle burned from the tip to the socket, brings joy to the home, and wealth to the pocket."

So the candles couldn't be extinguished, they had to burn themselves out naturally. And they have to be real bayberry candles. I did some research after I got home and it turns out that the custom began with the early colonists. They discovered that the waxy coating of bayberries could be made into sweet smelling, clean burning candles, unlike the stinky tallow candles that were widely used in day to day life.

The problem was that although bayberry bushes grow prolifically up and down the East coast, it takes a LOT of berries to extract enough wax to make candles. For that reason they were usually saved for Christmas celebrations.

Marian still burns bayberry candles on Christmas Eve, and when I expressed an interest in it, she gifted me with a box of them for our house! The only place that sells them around here is Yankee Candle, which happens to be right across the mall from my bookstore. Another condition of the candles bringing you luck (besides burning them all night) is that they're supposed to be given to you by a friend. So yesterday I went to Yankee Candle and purchased several boxes. I'll give one box back to Marian for her kindness in sharing with me, and I'll give the rest to a couple of other friends. 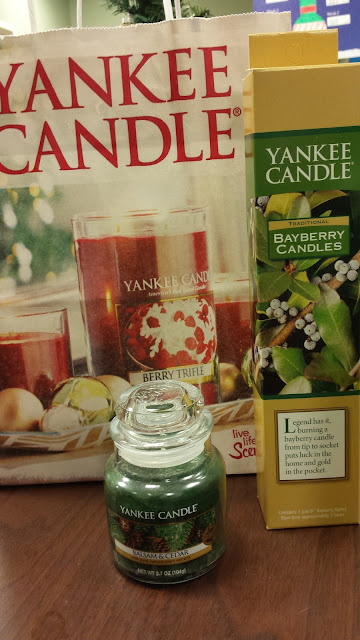 I also bought some small Balsam and Cedar jar candles. I lit one last night and it made our house smell like a freshly cut Christmas tree--very nice.

So despite my messy house, long hours at work, and family responsibilities, I'm getting into the Christmas spirit!