As hard as it is to believe, yet another week of staying at home has flown past. Some cautious forays out into the world have been necessary, though.

I worked on Monday. It was an easy day, answering phones (that barely rang) for four hours. There was almost no one else around. It's been a silent building for months now, which is kind of sad. It was never meant to be so quiet for so long!

On Tuesday morning I went to a long-delayed dental appointment to have a permanent crown put on. I'd been living with a temporary since early March. For the first week or two after the permanent one came back I was afraid to go out in public, then the office closed for a month due to Covid-19, then when they reopened I was too afraid to make an appointment right away. The temporary was holding up fine, so I kept waiting. Finally the office called and explained to me all the steps they're taking to protect patients and staff from the virus, so I decided it was time. What a relief to have that done!  I've had so much bad/painful dental work done over the last couple of years that going to the dentist has become somewhat torturous to me, no matter how minor the procedure. The temporary crown did not want to come off, and the scraping, pulling, and loosening that was necessary to make that happen had me so rigid with stress that tears started rolling from my eyes. (I wasn't in any actual pain. I think it was just adrenaline and fear). I was so embarrassed, but my new dentist, Dr. Abbas, was very kind and patient. I like him a lot, and I'm beginning to trust him. He finally got that stubborn temporary off, and the new permanent crown in place, and I'm still relieved a week later.

Then I had a doctor's appointment with my regular GP on Thursday. I wasn't thrilled about going to her office, but I had to because I needed refills on a script that she didn't originally write for me. I wore a mask and hoped for the best--the office was taking every possible precaution, like calling ahead to check for flu-like symptoms, checking temperatures at the reception desk, spacing out chairs in the waiting area, etc. So that was okay. One funny thing: two days prior, they took my blood pressure at the dentist's office, and it was on the high side. Not crazy high, but elevated enough to alarm me a little bit, you know? But then on Thursday at my regular doctor's, my blood pressure was perfect again, just as usual. That will tell you something about my fear of the dentist!!  :)

On Friday morning I met up with two of my book club friends for our weekly date: doughnuts and coffee bought at a drive through and eaten in our parked cars while we talk. Our book club is talking about resuming meeting next month and how we can do it safely. I think our June meeting will be held on a back patio with plenty of room to space out chairs. I sure hope we can do it; I've missed that group of women and our book club nights so much! Fingers crossed.

Friday was also a special day: my little heart-niece, Carsen, turned two years old! It's hard to believe that she's already a toddler. 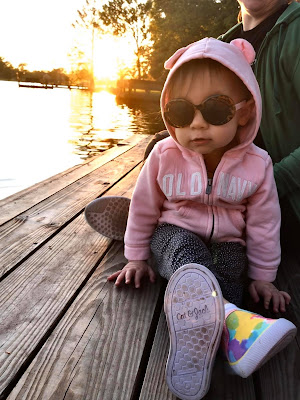 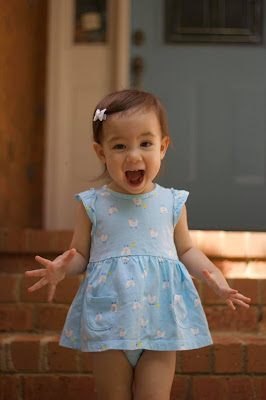 For everyone's safety, her creative mom and dad gave her a Zoom birthday party! They did a good job of making sure everyone knew how to access it, including Marla's parents and 90 year old grandmother. Everyone got to sing "Happy Birthday" and watch the birthday girl blow out her candles. She was sitting at a table with a huge arch of colorful balloons above her that her daddy had assembled. It was the most unusual birthday party I've ever "attended"!

After such a busy (well, busy by 2020 standards) week it almost feels like life is getting back to some sort of normal.....except not. Things seem more weird now than ever. I work for 4 hours this coming Tuesday and then I think I'm done for the summer. Who knows what school starting up in August is going to look like? I just hope we can start. It's so strange to still have weeks of staying at home in front of me after being here for 10 weeks already.

Gregg is thinking about returning to his pet store job next week--the beginning of June--barring any sudden large leaps in our local numbers over the next 7 days. He's planning to try to limit the number of people allowed to browse the aquarium aisle at any one time, asking them to observe 6 feet of distance. If the store gets too crowded for that, he'll either retreat to the back office for a while, or else come home altogether. He'll wash his hands often and avoid touching his face. Will that be enough? I sure hope so. We're both pretty nervous about it. Good information about the risk is just impossible to discern in our current political climate. It's scary and frustrating. We're all just doing the best we can, I suppose.

To end on a happier note, here is another (bad focus, but good color) photo of our male Painted Bunting. I say "our" because this beautiful bird, and a female, have been eating at our feeder for several weeks now! I'm the envy of the people at the Wild Birds Unlimited store where I buy my seed. Painted Buntings are almost never seen in this area. 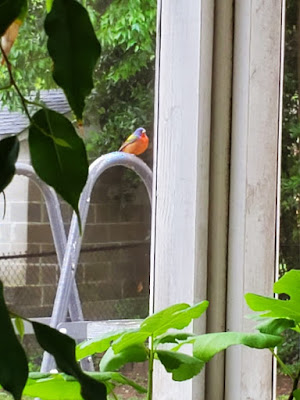 The female is gorgeous golden-green color. Much more subtle than the male, of course, but very beautiful. I have yet to get a photo of her. They're shy birds that visit the most early, early in the morning and then again right before sunset. We've also had another new-to-us species visiting the feeder these days: a pair of Blue Grosbeaks. They're the most gorgeous shade of blue you ever saw, and it's been impossible to capture it on my cell phone camera. Here's a picture I lifted from the webs to show you: 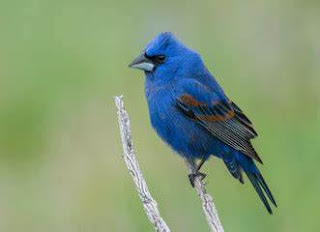 All the while, we've still been seeing tons of Cardinals, House Finches, Titmice, Carolina Wrens, a pair of Red Bellied Woodpeckers, and a few pesky Cowbirds and a small flock of Grackles with fledglings in tow. The squirrels are also beyond bold at this point, which is going to end badly one of these days when Ginger or George takes them by surprise. We saw a deer the other night when we were out walking the dogs (it ran past under a streetlight) and we've seen a couple of rabbits lately, too. We're going to miss all this time at home to watch the animals and birds and the seasons change when we're finally able to fully return to normal work schedules. It's been a memorable three months, that's for sure!
Posted by Jennifer at 10:50 AM 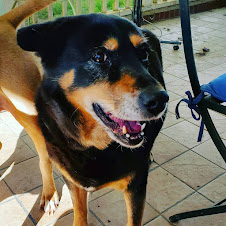