The sadness of the last couple of weeks is settling in to a sort of dull depression in which I have morbid thoughts (3am mortality fears, anyone?), occasional bouts of mild anxiety, and a kind of plodding listlessness the rest of the time. Added to my awful grief over Ginger's death, my parents and our relationship has reached a low point these days (at least on my end). That's a story for another day, though. Compared to my sadness over losing Ginger, their selfishness and thoughtlessness is barely a pinprick most of the time. Just more background shades of gray in my life at the moment.

And I swore to myself I was going to be more upbeat the next time I posted. Sorry!

I need to go back to work.

One good thing that happened is that I finally bit the bullet and went shopping on Tuesday. I found a great sale at the local JC Penny's because they're going out of business next month. I hate that they'll be gone, but was glad of the break to my wallet. Ginger's vet bills this month are over $1500 and we haven't paid the cremation fee yet. (Not that I'm complaining about spending so much on her. She was worth every penny and more.) I was able to buy myself 5 whole work outfits, with a couple of those pieces versatile enough to pair with other stuff I already own. I also bought some new underwear items and hose. And all in one store, and at a reasonable price! The new clothes were/are sorely needed and I can go back to work feeling okay about how I look, at least.

I'm sure I'm "preaching to the choir" here, but I'm also so, so tired of Covid-19. I want my old life back. That feels like another kind of grieving. I miss my friends, my book club, going out in public without fear, and so many other things. I don't think anything is going to change anytime soon in that regard, either. In fact, I hate to say it, but I imagine we're going to have a second wave in the fall that's even worse than the first one. I really hope I'm wrong about that.

And I wish the upcoming election was over and done with already. I dread it, no matter the outcome, although if 45 is reelected I don't know how I'm going to be able to move forward. I'm sick of the ugliness and nastiness, the racism and upheaval of these last four years. Can we even survive four more years of this horror as an intact country? Hell, we might be on the road to ruin no matter what. We're all so hopelessly divided, and the ugliness that has shown itself won't be easily forgotten. I'll never forget (or forgive) how so many people I know enthusiastically joined the Trump train. They saw his utter lack of morals, kindness, and decency, his unfitness for the job, the criminality of every person who works in his administration, the racism, the nepotism, the vile abuse that he unleashes on Twitter every single day, and still they love and support him. I can't understand it. I'll never understand it. More stress, just thinking about it, so I try not to. At least not much.

So anyway, how are you all doing these days? I've tried to keep up with blog reading and leaving a comment here and there, but I feel like I'm very behind. I hope to do better this weekend and catch up with all of you before my job starts back on Monday. I have a feeling the first week or so back is going to be exhausting, with little energy left over for the blog. Getting back to a normal routine is going to feel so good, though. 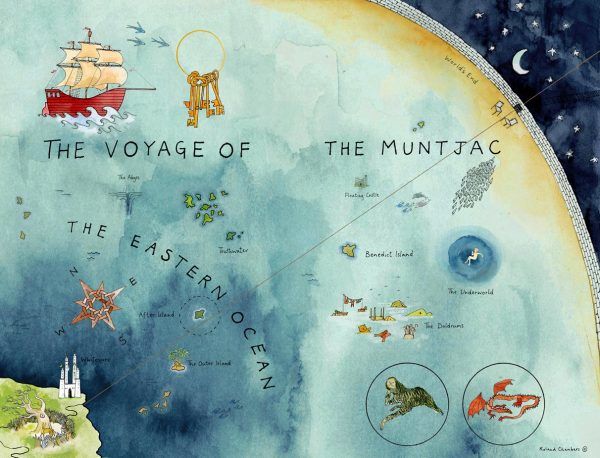 From The Magician King by Lev Grossman. Notice the Doldrums are very close to the Underworld, way out at sea.