It's really hard to believe, but as of today I've finished five years at my "new" job. I guess I need to quit calling it "new"!

This was, without a doubt, the worst year I've had yet, but I'm hopeful that next year will be better. We'll have an almost totally new staff. We'll be getting a new principal, one new assistant principal, one new guidance counselor (Little P.'s mom is leaving due to being treated terribly, and has accepted a job in another city about 20 miles away), head librarian, library assistant, and head custodian. At least a dozen teachers are leaving, too, and must be replaced. I keep hearing that the secretary won't be back, either. She's one of the rude and awful office women that helped make me miserable all year, so I haven't confirmed if that's true or not. (We don't speak unless it's necessary). Of course I hope it's true, we'll be better off without her. And finally, my favorite of the two school nurses told me this morning that she's leaving, too. It's very telling that we're losing over half of our staff; it shows what a terrible year it's been for us all. Hopefully some new blood will make a big difference going forward. If it doesn't, I plan to find a new school to transfer to next year.

But all that is for another day....for now, I am free! Free for seven whole weeks and I'm so glad! Having summers off is one of the best perks of working in the school district. It never gets old, leaving for two months at the beginning of June and then starting fresh in early August. The prospect of the summer off makes me feel a little like a kid again! 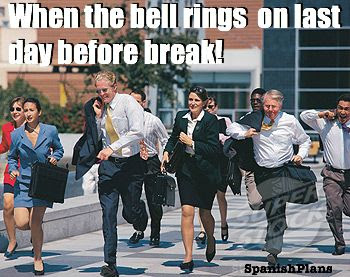 When we got the announcement at 2:30 today that we could leave, this is what we looked like! One of the teachers said, on the way out the door, "Good God! It looks like someone pulled the fire alarm!" Haha.