It's already almost the end of October, and I can't believe how quickly this month has come and gone! Between a long, nasty cold I was fighting for two weeks and extra projects at work, the past few weeks have gone by at light speed. I haven't done a single thing to get ready for Halloween this year, and it makes me a little bit sad. Last year I had the front door decorated with strings of lights, furry spiders and spiderwebs, and hanging plastic skeletons. There were also four really awesome carved pumpkins, after Meg and I got together for a little pumpkin carving party. Check out our handiwork: 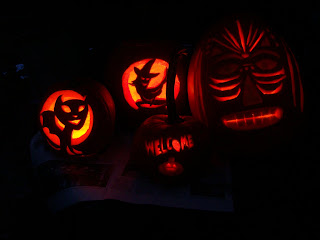 Meg and I also made a witch hat for me to wear to work on Halloween. We made a big mess, and got glue in places it's best to not speak of (ahem) but the hat turned out nice. We added a bit of purple veil and a fringe of tiny dangling spiders and purple beads to a plain black hat purchased at the dollar store. 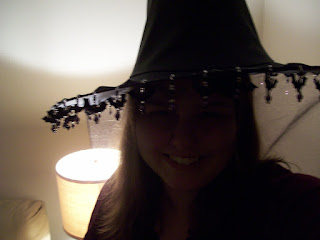 This year I just haven't had the time or the energy to do fun craftsy things. I am also scheduled to work from 4pm-midnight on the 31st, to do a Christmas set. There will be no handing out candy for me this year, except at work. Our store is signed up to be one of the retailers handing out treats at the mall. I didn't know that this phenomenon of "mall" trick or treating even existed until I got this job, and frankly it disgusts me. So many wonderful traditions in our country have been hijacked by the great mindless consumer culture, and are being turned into a chance for corporations to make more money. It's kind of pathetic. People dress up their kids (mostly in costumes purchased at Walmart) and bring them to the mall so they can drink Starbucks' overpriced, over roasted coffee, talk on their cell phones (with only one eye on the kiddos!) and shop while their children trick or treat. Don't even get me started on Thanksgiving and Black Friday. Lots of families now have a "tradition" of gearing up and joining the mad rush of people hitting the stores in the wee hours to shop shop shop. You see these families at around 8 or 9am and they're exhausted (yet still jacked up on the $8 lattes from Starbucks they've been drinking for hours) with wild eyes and short tempers. Black Friday is a horror, if you work in retail. And the worst part is seeing how many people now consider the mall the place to have meaningful time with their loved ones. It's sad, really. I hope that by next year I will have a new (non retail) job, and I can totally avoid the whole repellent scene during the holiday season!

But what was I saying? Oh yeah....so no handing out Halloween candy at home for me this year. GB isn't interested in doing it if I'm not going to be here, since we only get a few  kids anyway. Without my usual decorations to let them know we're into it, I doubt any will show up. And the last thing we need around the house is lots of leftover candy! Although we're kind of skipping the Halloween decorating and events this year, I've been doing a few small  things to acknowledge the change of seasons. I got some new kitchen towels with a falling leaves design for our kitchen. I put out our pear and pumpkin shaped candle holders in the den. I've been cooking heartier meals lately that make the house smell good, like chili and soup and pies. Our tiny family takes a long walk almost every day, and we love checking out the seasonal decorations our neighbors put up. It's kind of nice to just quietly observe and take things easy sometimes.