This year, one of my friends brought a very special guest a our Mid Autumn Moon celebration. Everyone adored the new addition, with one notable exception. Ginger the dog was less than impressed. 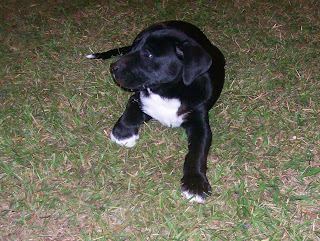 Isn't he the cutest little guy ever? Gus is 6 weeks old and was adopted by my friend the day before our party. She brought him along to meet everyone, Ginger included. We're hoping Ginger and Gus will eventually become good friends and playmates. 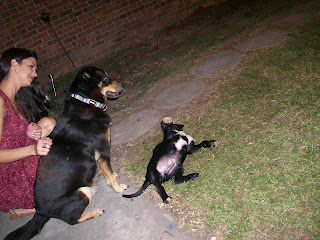 Right now, Ginger mostly finds the little guy annoying. She also isn't crazy about me petting Gus or showing him any attention. I am hers, and she wants him to know it! She ended up getting way too many treats (party food) from all of our friends to distract her from the little bastard show-stealing pup. Come to think of it, maybe that was her plan all along!


All in all, we had a good time at the party. A few guests canceled at the last minute, but the people that mattered were there. We had awesome food, awesome lights and decorations, a puppy to play with, and lots of gossiping and drinking outside under the full moon. Actually, we only got one glimpse of the moon, around midnight. It had been cloudy and threatening rain all day, so I was satisfied that it at least stayed dry for our party. When we finally did get our one glimpse of the moon, I snapped a picture: 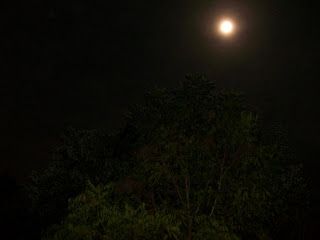