My husband has fond memories of the homemade fried apple pies his grandmother made for him when he was a little boy. She had apple trees on her land in North Carolina, and she dried apples on her roof for using through the winter. Whenever Gregg and his dad went to visit her, she would make little fried "hand pies" from dried apples and have them waiting on a cloth covered platter when he got there. She died when he was very young, and he never knew her very well, but he's never forgotten those delicious treats.

Over the years I've made different variations of his grandma's recipe to try and satisfy his craving. Obviously, I can't go out back and pick apples, and I have no tin roof to dry them on if I could. I imagine that his grandma probably fried the pies in pure lard, too. (I won't be going there). I have come up with a reasonably close substitute for her recipe, though, and even if it's different it's still delicious! I made a batch last night.

First I peeled and sliced about 8 large Granny Smith apples (and they did come from North Carolina...our local markets truck them in from the mountains...it's too hot to grow apples down here) and then I mixed them with brown sugar, cinnamon, nutmeg, a bit of salt, and a couple of squeezes of lemon juice. Since I was already baking sweet potatoes I put the pan of apples in the oven to cook slowly alongside them.

After a couple of hours this is what they looked like: 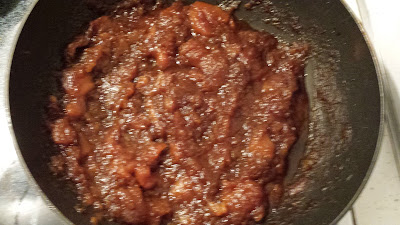 Then I used premade sheets of pie pastry, rolled out and cut in half. I put a good dollop of apples in each..... 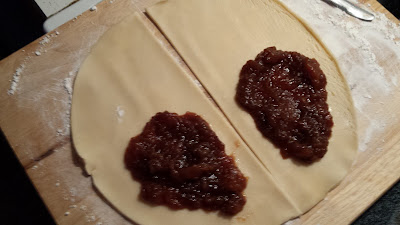 ....and then folded them over and crimped down the edges with a fork.

I heated vegetable oil in a deep skillet and very carefully lowered each pie down into the hot oil.

When they were golden brown, I put them on paper towels to drain, and sprinkled sugar on top while they were still hot. 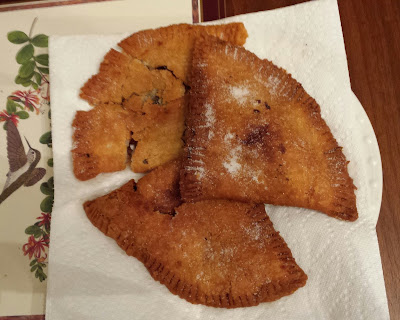