I swear, it's done nothing but rain here for weeks and weeks. I'm so sick of it. Everything is damp and nasty and when you factor in the short days with the lack of sunshine, I just want to curl up in a hole somewhere and sleep until spring. I hate this time of year even when it's not pissing rain every single day.

My intention was to buy Gregg a new tent for his birthday--he's missed going camping since our last tent got damaged--but the lack of appropriate weather for camping made him indifferent about shopping for one. We have a long weekend off coming up and had hoped to take the dogs and go spend the night at a local county park. Too bad. Not only is it far too wet out, but there hasn't been a frost yet and mosquitoes have been terrible this year with all the standing water. Snakes are a concern, too. Our vet told me he's seen 50 or 60 dogs bitten by snakes this summer, so until we have some real cold weather, we won't be going to sleep in the woods!

Since buying a new tent had lost it's appeal for the moment, I picked up a couple of books for small birthday gifts. I also picked up some fancy cupcakes at a local bakery called Sweet! . 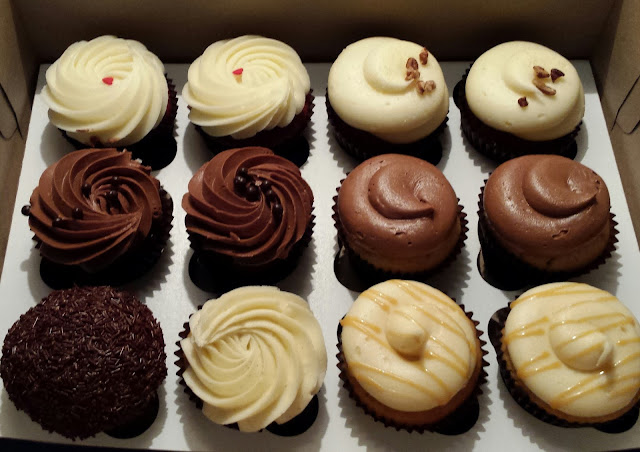 We had a nice dinner and spent the day indoors because of the rain.

Gregg seemed a bit down all day. I think it's because his mom forgot his birthday for the first time ever. She has Lewy Body Dementia but has been managing fairly well, so I had hoped she would remember.  He didn't mention it, and I hated to bring it up, but I know it made him sad. It's terrible watching your parents grow old.