Father's Day, and an anniversary

Tomorrow is Father's Day, and the day after, June 19th, would have been my paternal grandparents' 69th wedding anniversary. I promised you all some more family photos, and what could be better than vintage wedding pictures? Grandma gave me copies of all of these to keep forever. 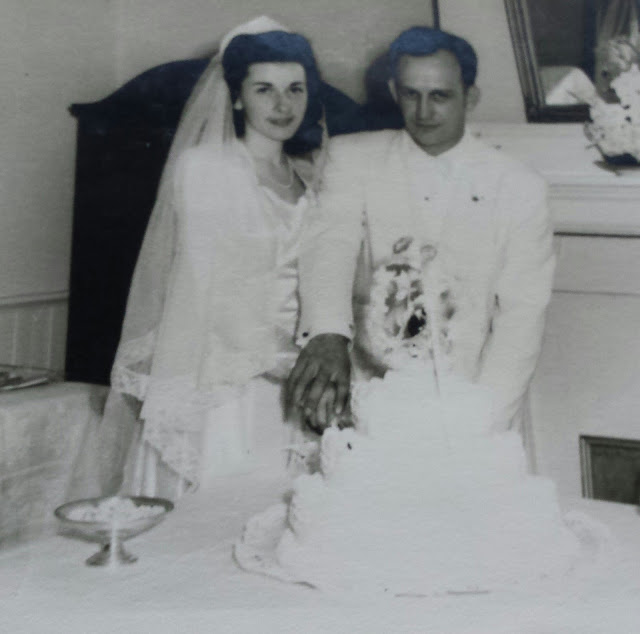 You guys.....wasn't my grandmother beautiful? And her dress...!!! Just lovely.

I also got a copy of their wedding announcement that ran in the newspaper. Back in those days, they spared no detail when describing a wedding in the society columns. Here are a few excerpts I thought you might find interesting:

......The lovely little chapel was decorated with tall floor baskets of white dahlias and gladioli. Sprays of ivy entwined the altar rail, where burning candles were placed..........

....The lovely young brunette bride, given in marriage by her father, was beautifully gowned in white slipper satin, with sweetheart neckline and long fitted sleeves ending in points at the wrist. Her full skirt, attached to a fitted bodice, ended in a wide cathedral train. She wore a fingertip veil of bridal illusion edged in rose point lace and caught to a halo of tiny beads. The bride carried a white prayer book topped by a white purple-throated orchid, and showered with satin ribbons.....

The bride had as her only attendant her cousin, Miss Clara Lou Hardwick of Aynor. She wore a blue taffeta dress fashioned with sweetheart neckline, fitted bodice and full skirt, and carried a colonial bouquet of yellow rosebuds encircled by Shasta daisies. She wore matching taffeta mitts and, on her head, a bandeau of roses and daisies.

Mrs. Martin, mother of the bride, wore Eleanor blue crepe with softly draped hipline and self embroidery, and on her shoulder, a corsage of pink roses.

Mrs. Czmiel, mother of the bridegroom, was gowned in beige. She also wore a corsage of pink rosebuds.

Immediately afater the ceremony the bride's parents entertained with a wedding breakfast at their home on Marion street, which was made attractive with numerous arrangements of white gladioli, dahlias, and snapdragons. The bride's table, centered by a triple tiered wedding cake tipped by a miniature bride and groom, was especially lovely, decorated with gardenias tied with maline and white satin ribbons......

.....During the afternoon, the bride changed her wedding gown for a dressmaker suit of white gabardine with which she wore black accessories and the orchid from her prayer book. Following a brief wedding trip the young couple will be at home in Chicago.

There was plenty more I left out, like who provided the nuptial music and the pieces they played ("Oh, Perfect Love" by Gurney and "Ave Maria" by Shubert, as well as the traditional marches), the usher/groomsmen names and where they lived, and who greeted guests, worked the bridal register, presided over the dining room and "assisted with hospitalities" at the reception. There was also a bit about my grandmother being a recent graduate of Winthrop University, and my grandfather being a veteran of WW2 and serving in Europe.

Clearly, wedding announcements were a big deal back in those days!

I hope you've enjoyed these old family photos! I had so much fun looking through them and picking out ones to share here!

Happy Father's Day to all the dads out there! Go show your family some love, especially the older generations if you're still lucky enough to have them in your life. I feel very fortunate to still have grandma around at her grand old age of almost 90 years old.
Posted by Jennifer at 12:44 PM