Limping into the New Year

This week has been all about trying to get back into the swing of work after all the holiday excitement and almost three weeks off. Oh, and hurting myself:

This was the back and side of my knee (I fell on the front of it) two days after my tumble on the nature trail. It's continued to darken since then and is now turning all sorts of lovely shades of yellowish green. The school nurse thinks the blood pooled in the bottom of my leg while the swelling was going down. Although the front of my knee is pretty bruised and scraped up, too. And it's been really uncomfortable to the touch. The other night George accidently banged it hard with his tail (he was wagging) and when I shrieked in pain, he licked it, which made me wince again, and poor George looked like this: 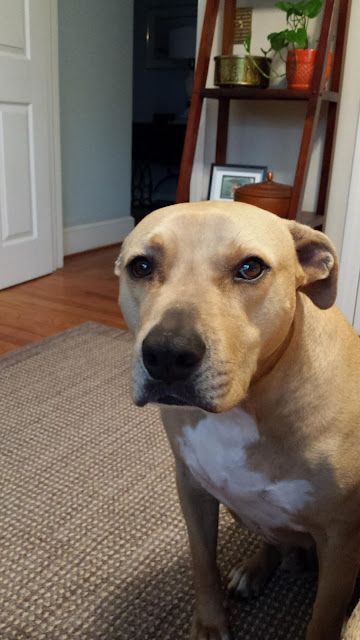 Only much more sheepish. Poor boy. He was only trying to help.

We had a good visit with Gregg's sister. Her lovely daughter, our niece Melissa, recently graduated magna cum laude from college, and her mother gave us the news that Melissa is newly engaged! Karen is thrilled about it and already loves the young man like a son, so it's all happy news on her end these days. Gregg was so happy to see Karen. Although he loves his brother, his sister is special to him and the sibling he loves best. He tried to talk her into staying an extra day or two (after clearing it with me first, of course) but she had obligations she had to get back to. And I had to go back to work the next day.

Work has been fine. I like my job, so going back after a long break isn't a big deal. It's been nice to see everyone. The bookkeeper told us all (first thing Monday morning!) that "We have 15 weeks until spring break!" which was kind of a downer! Haha. The upside of that is since Easter is so late, once we come back after spring break we'll only have 5 weeks of school left.

I had fun showing the school nurses my dramatic looking bruises! I had texted one of the them the night I fell and asked for advice. She told me she thought it was only badly bruised, but that I should get it checked out. She also advised me to ice it, elevate it, and to start taking Motrin immediately. She was right; it's only badly bruised, but it's been tender and I have to walk slowly and carefully.

Not the ideal way to start a brand new year....limping! But at least we also had a nice houseguest (and time with family) at the start of it, too.
Posted by Jennifer at 7:30 PM