A cold front rolled into the area on Christmas Eve. After raining all day, it suddenly got windy with great big gusts rattling the house, and then the temperature started to drop. That night it got to just below freezing, with a stiff wind that would chill you to the bone. Yesterday the high temperature never got much above freezing, and our low last night was 22 degrees (-5.55 Celsius)! That's pretty intense for South Carolina! I've been afraid for the little fig tree I planted out in September so I covered it with plastic garbage bags yesterday afternoon. It's far too young and tender for such low temperatures.
I've enjoyed my low stress holiday although I do miss our family and friends. Gregg's sister Karen and niece Melissa arranged a Zoom meeting for the family yesterday, but since our desktop computer doesn't have a camera, it was just too hard for us to manage with a cell phone. We were content enough with phone calls and texts, and hopefully by next Christmas we can see them all again. On Christmas Eve my friend Marla did a front porch drop and left a package for us: homemade ornaments made by her and two year old Carsen. I miss seeing that little girl! A year is a long time to lose when a baby is that young. I hope by next Christmas we can safely have her (and her lovely mom and dad) over, too.
Yesterday morning we bundled up warmly (even George had on winter wear!) and went over to the park for a good walk. Afterwards we watched old movies and stuffed our face. I'd made way too much food, as usual.
Christmas day at the park: 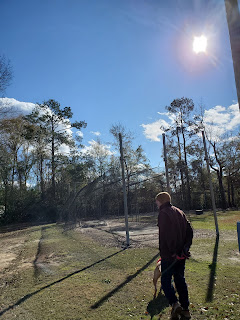 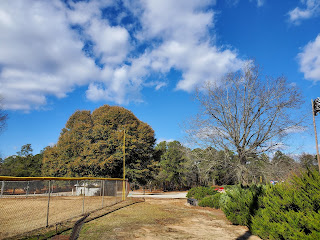 Here's some of the food: 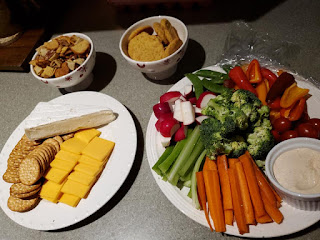 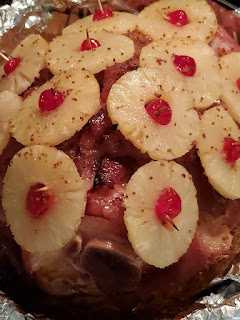 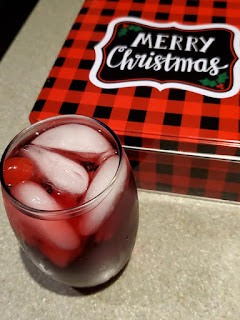 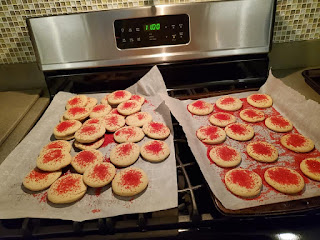 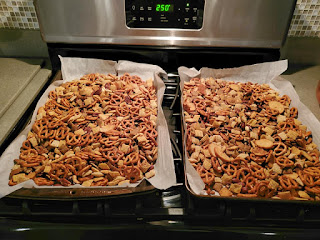 This wasn't all, there were also dates stuffed with toasted pecans and wrapped in bacon (Devils on Horseback), Watergate salad (terrible name, but it's delicious), fresh pineapple, and King's Hawaiian rolls to make ham sandwiches with. One thing we didn't have much of was sweets. Yes, I made cookies, but the recipe was for "tea cakes" which are very mildly sweet. The red sugar I sprinkled on top rolled right off so they looked kind of plain, too. I made extra of the cookies and the Chex mix so I could share with our nice neighbors. I'm actually relieved not to have tons of sweets left over this year.
George and Marco would like to announce that they both got new toys from Santa! 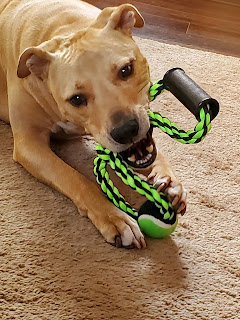 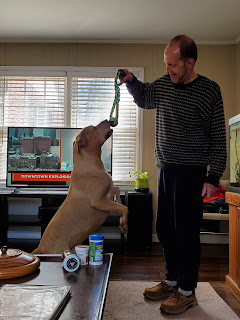 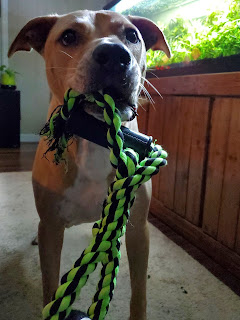 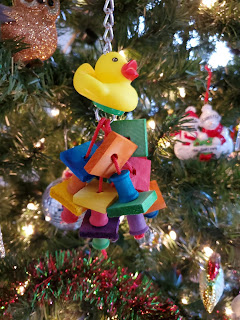 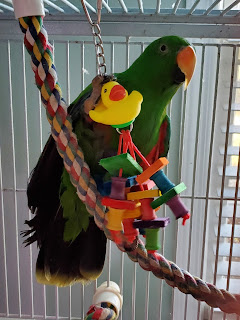 They both loved having something new to play with. In fact, George loved his new rope toy so much he's almost chewed through it on one side! Oh well.
So that's been it. The only other thing of note that happened is that Gregg's cell phone started acting weird and then it died. I spent two hours this morning after he went to work trying to deal with that and get a replacement. First I went to the Verizon store, but they're only seeing customers by appointment and since it's the day after Christmas they were booked solid. So I came home and called a customer service number (or three) and finally got a claim in on it and a new one is on the way, set to arrive on Monday. Despite having a "protection plan", since the phone is unrepairable and over a year old I had to pay a $199 fee for a new one. Ouch! I should be used to it, that's just how things go around here when the holidays roll around. On a related note, we're still enjoying the new dryer we had to fork over for at the beginning of this month. Merry Christmas to us, I guess! :)
I hope you've all had a nice holiday. It's definitely been a weird one, hasn't it?
Posted by Jennifer at 6:09 PM