My bird Marco has grown some long, sharp, out of control dinosaur claws lately. They hurt when he flies to you and lands on bare skin, like around the neck and shoulder area. What's even worse is that the nails are so long that they're starting to interfere with his ability to perch easily. Something has to be done.

I've been afraid to trim his nails. The old man I got Marco from as a baby, a breeder with a lot of experience with several species of parrots, once told me a story about another parrot breeder he knew that made a bad mistake with his personal pet. Somehow the bird had a bleeding toe---I can't remember for sure if it was a toenail, but I think it was--and he wasn't as diligent as he should have been to make sure the bleeding had stopped. A tiny bit of blood kept slowly welling up all night, apparently, and the next morning the bird was dead. Moral of the story: birds don't have a whole lot of blood reserves, so any bleeding, no matter how seemingly slight, is a deadly serious matter.

Fast forward 14 years, and I'm terrified of trimming my bird's nails. I've developed a phobia that I'll cut too far and make him bleed, and aside from not wanting to hurt or traumatize him, bleeding in birds scares me.

Luckily, my plucky friend Martina is willing to do it for me! She a head technician at a veterinarian's office, has loads of experience with this kind of situation, and has all the tools to do a good job (mainly good cat-nail trimmers and styptic powder). All I'll have to do is hold Marco wrapped securely in a dishtowel while she starts the process of getting these gnarly dinosaur toenails under control! It's going to take a few weeks, and we'll have to start with just little bits to get the quick to recede, but I'm so grateful to have her help with it. I picked up a bottle of wine and some snacks to share after she's done tonight. 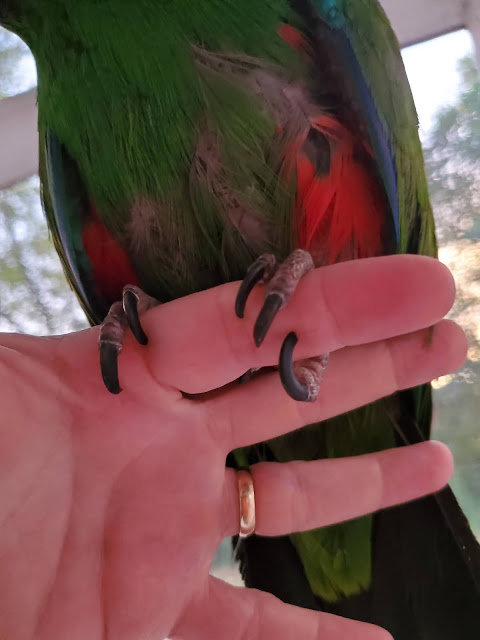 Email ThisBlogThis!Share to TwitterShare to FacebookShare to Pinterest
Labels: Life with Marco, life with parrots