Little P. and I have a birthday coming up next week! He's going to be nine years old. I adore that boy, and it's fun that we share a birthday. This year I have no idea what to buy him for a gift, though. A couple of weeks ago I asked him what he wanted, and you know what he said? "I don't know, I really already have everything I want." I thought that was rather mature, given how he usually has a big list of expensive items in mind when holidays and birthdays roll around!

I pressed the issue a bit the next day, since I'm going to get him something and need ideas. After giving it some thought he mentioned that he went to a birthday party at a skating rink a while ago and didn't have his own pair of skates. Since I know nothing about kids' sizing, or how fast his feet grow, I didn't feel comfortable with that suggestion. It's a specific enough request that it's likely someone in his family has already bought the skates, anyway. When I asked him what else he might like instead, he just shrugged.

So, dear blogger friends, what would you buy for a nine year old as a birthday gift? I love to buy books for kids, but only if they like to read and will appreciate them. I'm sorry to say that even though P. reads really well (and well above his grade level), he's not turning out to be a real reader. What he does like is building things with Legos, and projects that involve electronics and robotics and even math. He recently qualified to begin the advanced/gifted academic track in school, so he's a really smart kid. And he likes active outdoor play and sports, typical boy stuff. Any suggestions will be welcome (not too expensive, though).

I have two more Little P. updates for his fans. Remember I told you he had a crush on a little girl in his class? Everything was going well until the day the teacher asked the class who had been whispering when her back was turned and the girl ratted P. out. He showed up at my desk that afternoon in a state of high dudgeon, a betrayed young man! From that day on, Love was Dead.

At the end of January Little P. had his "Vocal Star" audition. He had picked I'm Still Standing by Elton John to sing. His mom said that when he first got up on the stage and saw the people looking at him, he froze, and then his bottom lip started to tremble. She thought, "Oh, no...." but then he pulled himself together, managed to smile (although she knew he was on the verge of crying) and then sang his song all the way through. His voice shook but he finished it! She told him afterwards how proud she was of him, even if he didn't win. I was pretty proud of him, too. That took guts!

And look how handsome he looked in the new jacket she bought him for the audition: 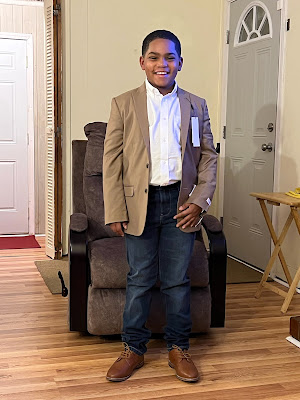 (This picture makes him look so grown up for an eight year old! He doesn't really look quite this grown up in person).