The food I made for last night's book club was a success! Everyone seemed to enjoy it, but nevertheless I wondered why I went to so much trouble when everyone would have liked simple food/store bought stuff almost as much. Still, I host the group so rarely that I wanted to go to the extra trouble and make some good stuff to share.

I started the night before and grilled fresh corn. After it cooled, I cut it off the cob and added drained and rinsed black beans, diced red and green bell peppers, red onions, and halved cherry tomatoes. I made a salad dressing to stir in with lime juice, olive oil, chili powder, garlic, salt, and cumin. After refrigerating it overnight, I added soft crumbly Mexican cheese to the salad and it was ready to go.

Next, I made guacamole, which I'm known for in our group. It's very simple: mashed avocados*, finely diced red onion, minced jalapenos, lime juice, and sea salt. It's so simple to make, and there's never any left over. I like to serve it with both white and yellow corn tortilla chips.

I also made a faux Boston Creme Pie. The recipe called for making a yellow cake from a boxed mix in a 13x9 pan, letting it cool, and poking large holes all over the surface. Then you mix up instant vanilla pudding, and before it sets you pour it over the cake so that the pudding seeps into the holes. The cake (it's called pie but of course it's really cake) sits in the refrigerator until cool, then you add the chocolatey topping. The topping is made by bringing heavy cream to a simmer, pouring it over chocolate chips and a tablespoon of corn syrup, and stirring it all until it's smooth and glossy. This gets poured over the custard-y top of the cake and then you pop the whole thing back in the refrigerator for several hours or overnight. It was delicious, and probably the biggest hit of everything I made. It tastes just like a classic Boston Creme Pie.

Yesterday I made the other two things I planned to take. BLT pinwheel sandwiches made with crumbled bacon, romaine lettuce, diced heirloom tomatoes from my garden, and a spread made with cream cheese, mayonnaise, and chopped sun dried tomatoes packed in oil with herbs. All these ingredients were rolled into sundried tomato wraps. They were a lot of trouble, but scrumptious. 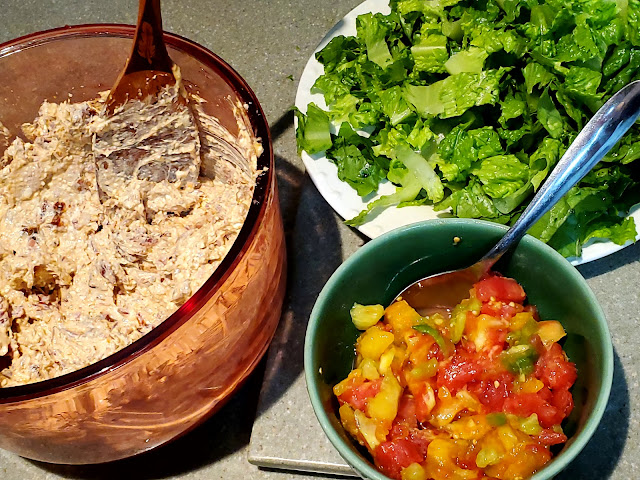 The last thing I prepared was a medley of melons: cantaloupe, honeydew, and watermelon, cut into balls and using half of the watermelon rind for a bowl. It came out really nice and the cool melon was perfect for a hot day. 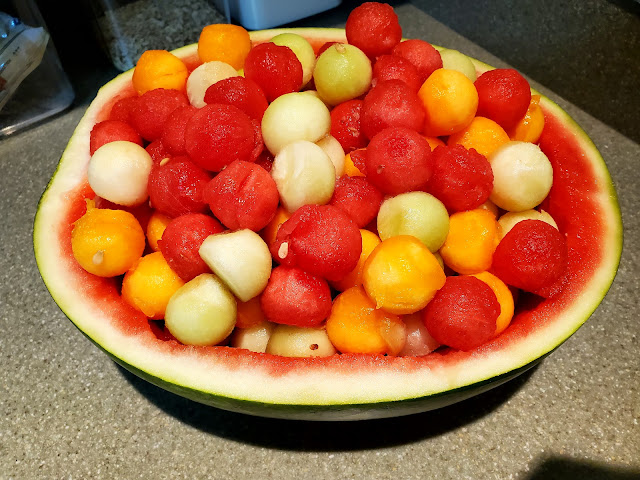 *Anyone else having trouble finding good avocados these days? No matter where I shop in Florence it seems like they're slow to ripen, somewhat hard even after they turn dark, and just not good quality in general.