The weekend is finally here again! This has seemed like the longest month ever at work. I can't believe we haven't even made it to September yet--the year is practically still just starting. If time flies when you're having fun, I guess the opposite is true, too.

I'm keeping my head down at work. I've seen a few friendly faces from the district office who've visited the school for one reason or another, and that's been a comfort. I'm well-liked by a handful of higher-ups in the district, so hopefully they can vouch for me if I ever need it. I checked into the transfer process, and that's a process that the district doesn't allow to begin until January at the very earliest. So unless something dramatic happens (and I hope it doesn't) I'm stuck for this year. Next spring can't get here soon enough!

We're still waiting on the results of Gregg's biopsy.  He was at the hospital cleaning aquariums yesterday and got someone to call and check, and they were told that "Dr. Wofford has a pile of test results sitting on his desk that haven't been read yet. He won't be back at work until Monday so it will be a few more days". Monday will be three weeks! That's just ridiculous. I still think everything is going to be fine, but I know it's a nagging worry at the back of Gregg's mind and he won't rest easy until he gets some answers.

I'm tearing down the summer garden tomorrow. I think the tomatoes are pretty much played out (so are the peppers) in the raised bed, and it's time. I also want to start planting fall vegetables next week. I'm thinking of trying more lettuce, spinach, turnips, mustard greens, and maybe a very early (quick) variety of carrots. We have a long growing season and our average first frost isn't until early November so there should be time for most of it. The zinnias in the bed in front of the porch are still going strong, and the butterflies and hummingbirds are still having a very good summer. 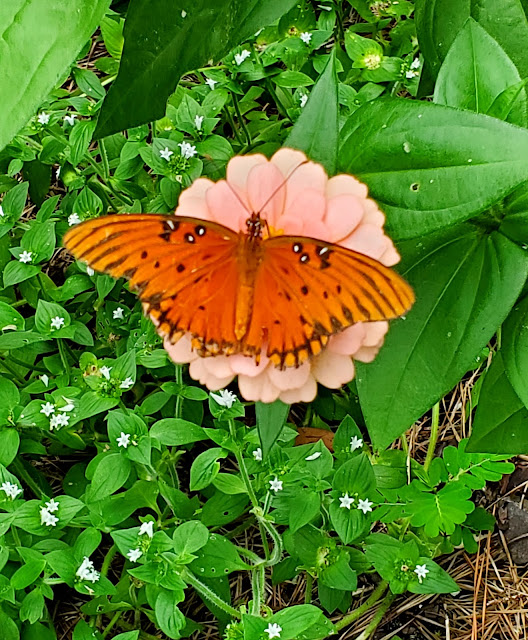 Since yesterday was National Dog Day, I tried to get a pretty picture of Poppy standing by the zinnias. She was not impressed with my efforts. None of my dogs ever have been! 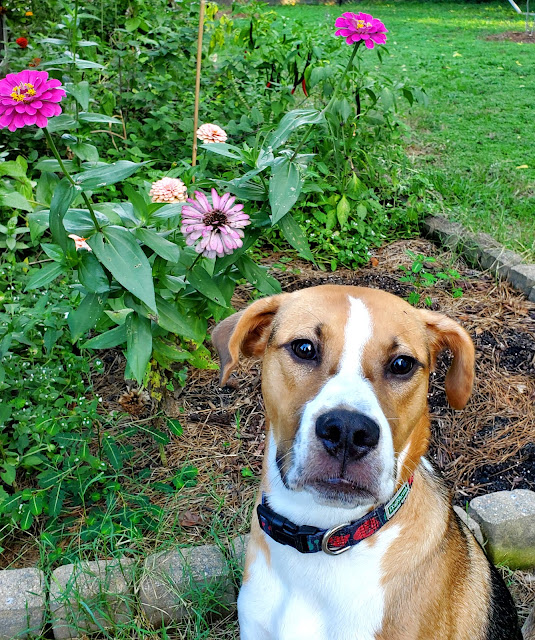 There's little chance of getting a picture of George by the flowers. Unless we're hooking him up for one of his twice daily walks around the neighborhood, he prefers to be either inside with the a/c or on the porch under the ceiling fan. George is definitely an inside dog! 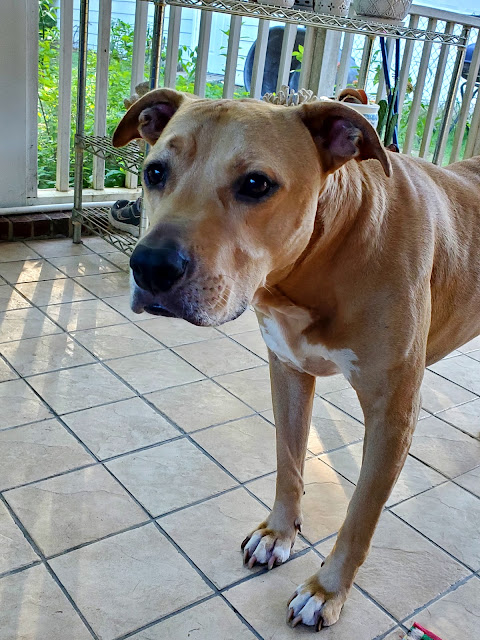