Maybe it's just me, but this August seemed like the longest month ever. I blame work stress; a lot of teachers and other staff members have told me they feel the same way this year. In any case, I'm so happy that September has finally arrived! No matter what the temperatures are like, once September begins it seems like fall to me.

I've been waiting on Tom to make his annual comment about "mists and mellow fruitfulness" but unless I've missed it (which is possible) then I've beaten him to it!

Season of mists and mellow fruitfulness,  Close bosom-friend of the maturing sun;Conspiring with him how to load and bless  With fruit the vines that round the thatch-eves run;To bend with apples the moss'd cottage-trees,  And fill all fruit with ripeness to the core;    To swell the gourd, and plump the hazel shells  With a sweet kernel; to set budding more,And still more, later flowers for the bees,Until they think warm days will never cease,    For summer has o'er-brimm'd their clammy cells.

Who hath not seen thee oft amid thy store?  Sometimes whoever seeks abroad may findThee sitting careless on a granary floor,  Thy hair soft-lifted by the winnowing wind;Or on a half-reap'd furrow sound asleep,  Drowsed with the fume of poppies, while thy hook    Spares the next swath and all its twined flowers:And sometimes like a gleaner thou dost keep  Steady thy laden head across a brook;  Or by a cider-press, with patient look,    Thou watchest the last oozings, hours by hours.

Where are the songs of Spring? Ay, where are they?  Think not of them, thou hast thy music too,--While barred clouds bloom the soft-dying day,  And touch the stubble-plains with rosy hue;Then in a wailful choir the small gnats mourn  Among the river sallows, borne aloft    Or sinking as the light wind lives or dies;And full-grown lambs loud bleat from hilly bourn;  Hedge-crickets sing; and now with treble soft  The redbreast whistles from a garden-croft,    And gathering swallows twitter in the skies.

Now I'm in the mood for changing leaves, cool nights, camping trips, soups and chili instead of salads and grilled meats, and mountain apples arriving in the farmers' markets. Speaking of apples, this showed up on my Facebook "memories" from four years ago today: 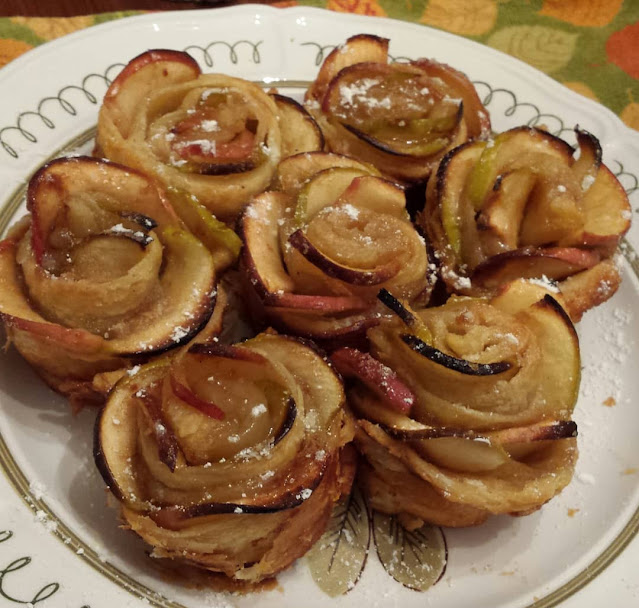 My first (and so far, only) attempt at making baked apple roses. I wasn't entirely satisfied with how they ended up looking, but they tasted great! I think slicing the apples thinner before wrapping them in pastry would result in a prettier rose shape; maybe I'll try making them again later this month. It was fun to do.
Another thing to like about September is that it's time to start decorating with things like pumpkins, gourds, colorful dried ears of corn, and those ubiquitous flowers of autumn here in the south: mums. The farm stand I like to visit (it's only two miles from my house) just got in their first shipment of them yesterday. 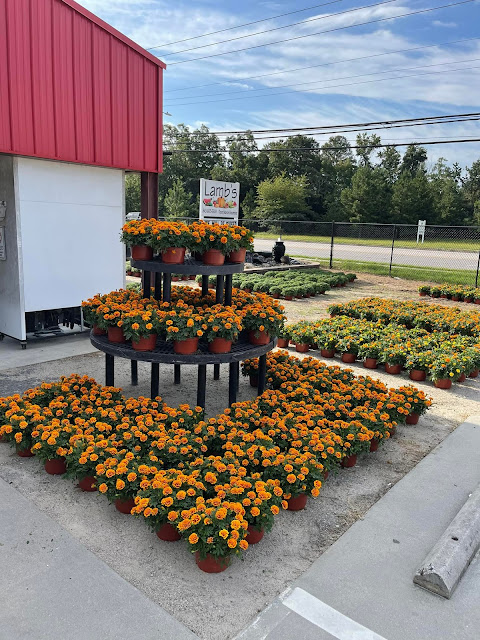 Of course, lots of flowers do well around here during our slow, long, mild South Carolina autumn. Even roses often rebloom (after the awful summer heat subsides) this time of year.
Next week middle school and high school football resume. Although I couldn't care less about the actual sport of football, there's something about a game that stirs old, old sense memories of growing up for me. The sound and feel and smell of a football stadium on a chilly autumn night. Bright lights, school band playing, climbing up high to the top of the bleachers for the best view, the smell of popcorn and nachos, then the excitement when the game starts and the announcer calls the plays. My house is close enough to one of the high schools that we can faintly hear the distant sound of the home games while they're going on. It always makes me smile.  Also, in the five years that I've worked at a middle school, I've occasionally stayed late to watch one of our team's home games. It's a fun seasonal activity to do occasionally, like watching one of little Prophet's baseball games in the spring!
What else? There's so much to like about the arrival of fall!  Since next Monday is Labor Day, there's a three-day weekend coming up. That's going to be a really welcome rest. Then at the beginning of next month we'll have a full week off for fall intercession. I'm really looking forward to that!
What do you like about the arrival of September?
Posted by Jennifer at 6:55 PM