Saturday night has rolled around again. I have no plans for the weekend other than staying in and resting.

I seem to be coming down with something. My school is filled with flu, Covid, and strep at the moment along with plenty of simple colds. I had a flu shot last month, and the latest Covid booster two weeks ago, so I'm hoping that this is just something simple like a cold. God forbid it turns out to be strep throat, which is the dominant illness there right now. I don't think so, though. So far, it's just sneezing, a mild cough, and some congestion in my chest along with some mild body aches. No fever (or not beyond a very mild one) so that's an encouraging sign. I'm feeling far from top form, though, that's for sure.

It's been a day of mostly sitting around watching tv and napping. I'm just beginning the final season of Lucifer (Netflix) which was recommended to me by a friend months ago and that I finally got around to starting recently. It's been the perfect show for me the last few weeks because it's funny and fun to watch and isn't very mentally taxing. Great distraction viewing during election season and a welcome break from the news. Also, Tom Ellis is a bit of eye candy, and that never hurts. :) 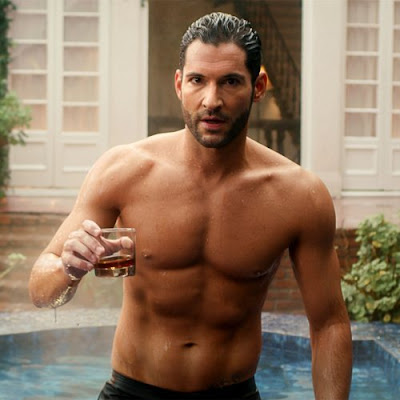 Gregg and I finished the latest season of The Sinner, also on Netflix, last night. It was okay, although none of the subsequent three seasons have been quite as good as the first. I also decided to try Derry Girls and that's turned out to be good for a laugh here and there. At the moment, comedy and more lighthearted shows are my preference as an escape from stress. And who wants to watch dark, dramatic shows when they're sick? Not me.
So that's my weekend in a nutshell. TV, soup, ginger ale, and rest. One good thing so far about this cold (or whatever it is) is that since my asthma is now being treated, I haven't started wheezing or getting short of breath. The past few years I've dreaded even the mildest colds because I'd have so many breathing problems as a result. Fingers crossed that it stays this way!
Posted by Jennifer at 6:06 PM