What a week it's been! I guess you could say it's not been the most auspicious start to a new year.

My car, which wouldn't crank on New Year's Eve, had to be towed half a mile to the Toyota dealership for repair. This couldn't happen until Monday because of the holiday, so I took a personal day off work (the first day after the break) to deal with it. We thought it seemed like a dead battery, but we own an electric charger, and it showed the battery as being fully functional. That wasn't the case, though. Apparently, a battery can be so dead that it won't show as being bad on a meter and it can't be jumped off. Or so says one of the mechanics, anyway. After the towing fee and a new battery, I was out $350--but at least I'm back on the road again.

I decided last month that I was going to attempt to eat better, walk a whole lot more, and give up alcohol entirely from now until my birthday in late March. I know I need to take better care of my health, and I definitely need to lose weight, so (as is my wont when I make up my mind about something) I jumped in whole heartedly last Sunday. Well, I haven't missed the alcohol, but the sudden change in my eating habits has been difficult. I'm afraid of developing diabetes; my mom did about 10 years ago, and it's been hard on her. With that in mind, I decided to cut way back on empty carbs devoid of fiber, vitamins, and minerals. No chips, sweets, wine, sodas, or meals heavy on pasta, bread, or white rice. I'm not doing the super low carb/keto thing; I think those diets are dangerous and not for me, but I'm still eating way fewer carbs than ever before. The first few days have been rough. Mild depression/flat mood, difficulty falling and staying asleep, vivid (and unsettling) dreams, and worst of all...bouts of painful diarrhea the past three mornings. (Sorry if that's tmi). I've been eating well but the changes to my diet have been so drastic that I guess it's been a shock to my digestive system....and all my other systems, too. Today seems a little better, fingers crossed that my body is starting to adjust. I want to feel better, not worse!

I've been looking forward to telling you about this next thing. Everybody seems to love my bird Marco, and I'll admit he's a real character. Everyone loves a good Marco story! Well, here's one for you.

Thursday afternoon I was on my way home from my weekly allergy shot, and I got a text from Gregg.

Let me show you that picture close up. 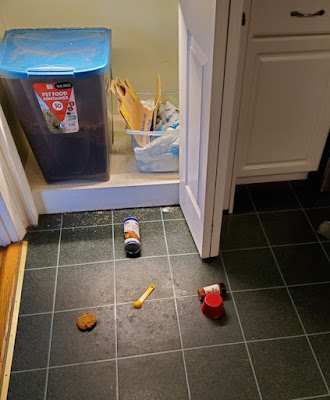 I was horrified, because I knew that meant that Marco had somehow escaped his cage while we were at work.* That's only happened once before since we've had him, and he'd gone on a rampage. I knew it was going to be bad.
He'd started in the pantry. He tore into the bag of walnuts (his favorite) and made a mess all over with them. He also chewed holes in the bread bag and an oatmeal cream pie wrapper. At some point he hurled the chewed-on oatmeal pie, a can of salt, and some spices to the floor. 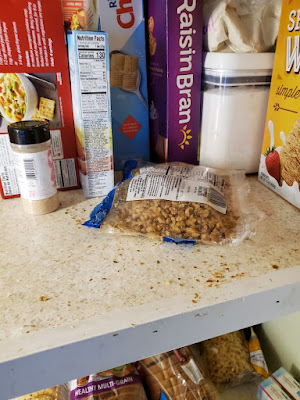 If the damage had ended there, we'd have considered ourselves lucky, but no. He moved on to the dining room. That's where he really did some damage.

Behold my (former) best orchid, the one that had a long stalk of flowers getting ready to open. 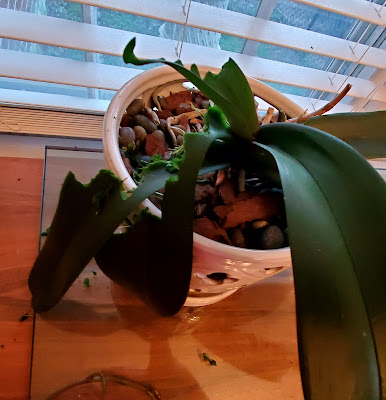 That was heartbreaking. That orchid was my pride and joy.

For his final trick, Marco had flown over to a floor lamp and knocked the shade askew. That actually turned out to be a good thing, because when Gregg went over to straighten it, it shot sparks straight up in the air. It was an old lamp and there must have been a short in the wiring, because the shade getting knocked around couldn't have caused that. Thank goodness it didn't start a fire**, or electrocute Marco, or both. At least something good came of Marco's adventures, but despite that Gregg and I were both pretty pissed off in the moment.

*Just like last time, the latch on the front door of Marco's cage hadn't been firmly closed, and he was able to push the door right open.

**Our second recent brush with faulty wiring that could have started a fire (last month it was the pre-lit Christmas tree). Could this be a sign?