Over the past year I've made friends with a little boy from Guatemala. His daddy brings him to the book store every now and then, and since he's only 4 years old and hasn't started school he doesn't speak any English yet.

I'm still working at learning Spanish so I always take the time to chat with them as much as I'm able (the father's English isn't much better than my Spanish so we struggle a bit sometimes).

A few months ago the little guy came in with a cast on his right hand. There was some sort of accident (I'm not entirely sure what kind but I think it involved a lawn mower) and the poor baby got his hand mangled and ended up losing the little finger on that hand.

He's going to be ok. There have since been two surgeries and now he's in physical therapy to regain use of that hand. Whenever I see him now, I say to him (in Spanish), "Here's my big brave friend! How are you?" And he giggles and is too bashful to answer. His dad says he always looks for me first thing and gets upset if I'm not at work. He's such a sweetheart. And I spoil him as much as I can, giving him stickers and little toys left over from events in our children's department. I also take him over to the cafe in our store and buy him cupcakes and cookies.

Last night when he came in I told him to pick out a snack and he chose a Rice Krispy treat. When his dad asked him, "What do you say?" he looked at his feet and whispered in a tiny little voice "Gracias..."

My heart melted right there on the spot. 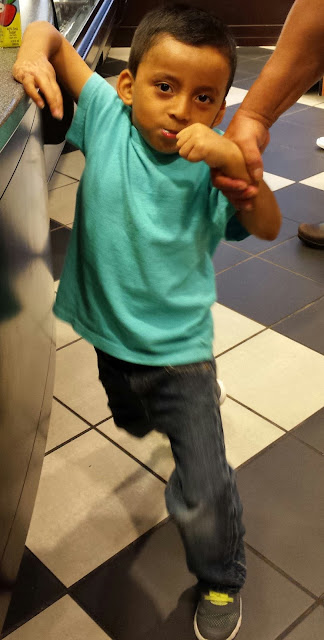