Comfort to be found

I won't even try to pretend that I'm not absolutely terrified at the prospect of having to somehow endure the next four years. President-elect Trump (how bitter it is to type that!) is already appointing white nationalists to his transition team, and the names of candidates for top cabinet positions being floated are a list of truly deplorable thugs, racists, idiots, and ultra fundamentalist Christian conservatives who deny science (climate change, evolution) and want to roll back civil liberties for almost everyone. People like Ben Carson, Sarah Palin, Chris Christie, and Rudy Giuliani. And of course, worst of all is his VP pick, Mike Pence. It's an utter nightmare. These people have no decency, no honor, and no scruples. Trump's campaign manager went on record yesterday telling the press to "watch what you say or else".  Hate crimes against gay people, people of color, and immigrants have broken out all over the country in the few days since the election.

I'm scared to death. But there is still comfort to be found if I look for it and refuse to give in to despair.

This is Edward Rogers, a WW2 navy vet I met at the bookstore last Thursday night. We discussed his service to our country, and how my grandfather also fought in WW2 as a sergeant in the U.S. air corps. Mr. Rogers told me he had served in the Pacific; my grandfather, Joseph Czmiel, served in Europe. (I have a great photo of him wearing a kilt while in Scotland!)  It seemed fitting to meet him on the eve of Veteran's Day, and I thanked him for his service. How remarkable that he served our country in that terrible war 20 years before the Voting Rights Act came to be law, a young man from the segregated South.

When I asked this good man what he thought of the election, he took my hand in his soft, wrinkly, weathered old hands and replied simply, "I cried." 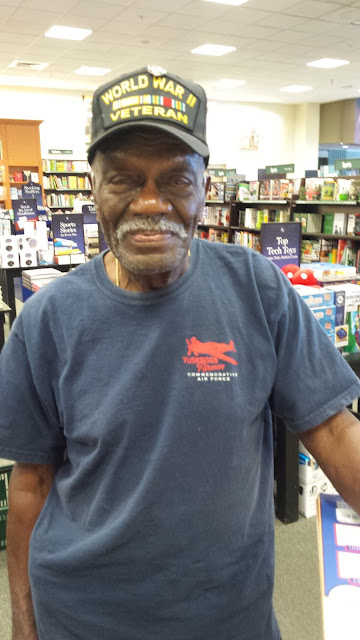 I cried a little bit then. I couldn't help it. But Mr. Rogers held my hand and very gently explained that we have to keep trying to do the right thing, to keep voting our conscience, and that "this too shall pass"...he said we've seen hard times in this country before, and we survived, and we will again. What a balm to my troubled soul it was. Being of my grandfather's generation, he knew what he was talking about.

Then on Saturday, I was scheduled to lead the 11am storytime for little kids at work. The story was called Penguin Problems and it was about a young penguin who is sad because he has all sorts of things troubling him. Then an old walrus comes to him, introduces himself, and proceeds to share these words of wisdom about dealing with problems with the youngster. I'm sharing them here for anyone that might need them today like I did. Email ThisBlogThis!Share to TwitterShare to FacebookShare to Pinterest
Labels: comfort