This has been the strangest hurricane we've ever had.

The worst of the winds and flooding happened well north of us, although the storm is moving so very slowly that it's still making its way across South Carolina as I type this. We never lost electricity, although plenty of people around town did, and the water is just starting to rise in this area. Late last night people in two neighboring counties had to start evacuating due to flooding. Some of my cousins had to leave home, and my parents (who were without power for two days) are anxiously watching the water rise around their house and hoping they won't have to leave, too.

Meanwhile, it's just wet and windy and dull here, and I'm getting awfully tired of being stuck inside. I did venture out to the nearest grocery store this morning to try to get something to cook today. I didn't buy any perishable foods as the storm approached, because I really and truly thought our power was going to go out and stay out, so we've been eating canned meals and junk since Wednesday despite having electricity. I suppose I should be grateful I didn't have to heat it on a Coleman camp stove! So I drove the half mile to the nearest Food Lion, but although they were open, they had lost power for so long that there was NO perishable food available. No meat, no dairy, almost no fresh produce, and no frozen items...so no home cooking again tonight! That's such a minor inconvenience I wouldn't dare complain when it could have been so very, very much worse.

We've been beyond fortunate with this storm. Last week when it looked like it was going to be absolutely devastating to this area people were really scared. I've never seen such a major evacuation and advance preparation by the state in response to a hurricane threat while the threat was still so far out in the Atlantic. Some of my most level headed, not-prone-to-drama friends were almost having panic attacks in the days leading up to Florence making landfall. Even my friend Marla, which surprised me. She's normally the last person to panic over a weather event, but I suppose having the baby to be responsible for now (not to mention new mama hormones) has made a big difference. Speaking of the baby... 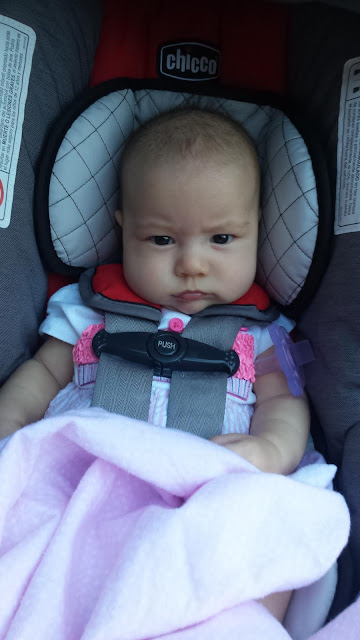 Check out the look she's giving me while I snapped her picture! This was taken earlier this week when Marla brought her over for short visit ahead of the storm. Carsen is growing into such a serious baby. She looks at everything intently with the slightly knit brow that you see here.

Thanks to everyone who left kind comments and good wishes for our safety during this storm on my last post! It meant a lot to me to see that so many people cared. You all are the best!
Posted by Jennifer at 12:41 PM