despite the heat that just refuses to abate, it's unmistakably the beginning of a new season. It's getting dark earlier at a rapid pace (as it does close to the equinox), the green of the leaves on the dogwood tree has taken on a golden tinge, and the sky is a deeper shade of blue today than it's been in several weeks.

that even based on my small salary, we were able to get approved for a mortgage loan! Although our new home's deed will be in both our names, I'll be the only one carrying the loan. Gregg had a very good credit score before he had cancer, but after six years of never ending medical bills it's been impossible to keep it up. So I have the credit score needed to get the loan, but Gregg makes two thirds of our income. Since we can't claim what he earns if the loan is only in my name, I was afraid that my lesser salary wouldn't be enough. It turns out I was worried for nothing; we were approved for more than we plan to borrow! What a relief!

fresh eggs from the science teacher at work who has a tiny homestead farm, as well as fresh local honey from her beehives! She's a certified beekeeper and is also mentoring her 13 year old son, William, who is on track to be certified himself as soon as he turns 16 (the minimum age allowed by the Department of Agriculture). William is a student at our school and he's the one who's been selling me the honey: 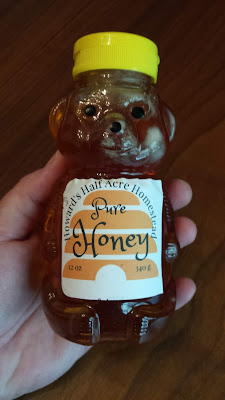 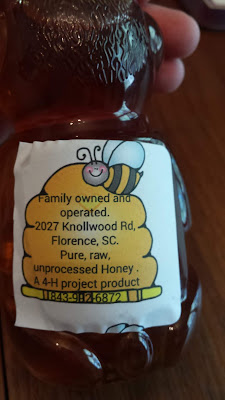 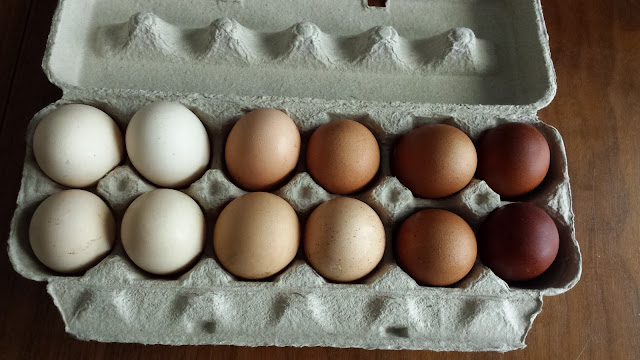 Twice now we've had scrambled fresh eggs and biscuits with honey and butter for supper. Delicious!

...nothing much, at the moment. I've been so busy the last few weeks with a new school year starting and working on the house hunt that at the end of the day, instead of reading for an hour or so I just fall sound asleep, early. I've been tired!

...to find the perfect house, soon! We keep finding little 1940's bungalows in the "historic" downtown area that really appeal to us both, although they usually need some work. But those older homes have really nice details that you never see these days, and the houses look like they were built when people didn't cut corners or use cheap crap for materials. One cute little house that just hit the market is priced well below what we're prepared to spend, and we could afford to really make it nice provided there aren't too many big repairs needed. We may to go see it next week after the Labor Day holiday.

about all the things I need to get done in the next two weeks. I have two Guardian ad Litem children at the moment and two upcoming court dates for them. Both cases will probably be settled and I'll be relieved of my obligation to them, but in the meantime I need to visit both children and write reports for the court. I plan to tell the coordinator that I won't be able to take any new cases until after the new year--I just don't have the spare time this fall.

Gregg has taken down some of the smaller aquariums and we're collecting boxes to begin packing some of our things in preparation for finding a house and moving. I know it's awfully early, but any packing we do ahead of time we'll be thankful for later.

...on staying consistent with counting calories and losing weight. I've had a lot of other things going on, but I'm determined not to backslide into old habits and to continue my forward momentum. I've lost over 30 pounds so far.

...to Marco talking to himself in the other room. He's been very talkative since I went back to work, probably because he misses the extra attention he got when I was home all day. The other morning I was putting a bowl of fresh food in his cage and he looked me in the eye and said, sweetly, "Love you..." Today he pulled out a large feather while preening, watched it fall to the floor, and shouted, "What?!" He's such a little card!

It's Labor Day weekend and I'm thankful for the extra day off. Cookouts are traditional for this unofficial end of summer holiday, and we might throw a couple of hot dogs on the grill Monday afternoon. I'm looking forward to the coming of autumn and everything that that means: cooler weather, apples and spices, changing leaves, marigolds and mums, blue sky mornings and golden afternoons....

"The breezes taste
Of apple peel.
The air is full
Of smells to feel-
Ripe fruit, old footballs,
Burning brush,
New books, erasers,
Chalk, and such.
The bee, his hive,
Well-honeyed hum,
And Mother cuts
Chrysanthemums.
Like plates washed clean
With suds, the days
Are polished with
A morning haze."
-   John Updike, September

"By all these lovely tokens
September days are here,
With summer’s best of weather
And autumn’s best of cheer."
-   Helen Hunt Jackson, September, 1830-1885