A Doozy of a Day

I had a blog post planned for today, but this isn't it. I'm too tired to give that post the justice it deserves because today was one for the record books.
Our school phone started ringing off the hook around 10am with parents wanting to register complaints about a certain teacher. It quickly became apparent that something was really, really wrong.
This particular teacher was on my Facebook friends list up until a couple of months ago when I got sick of the utter trash she posted and deleted (and blocked) her. She's a die hard Trump lover, believes Covid 19 is a "liberal hoax to bring down Our President" and everything she posted was so negative and mean that I decided I didn't need that in my life. Sometimes she would share memes that I thought were borderline racist, and I considered reporting her to administration or the district office a bunch of times. I wish I had, instead of just deleting her on social media and forgetting about it. Here is the post she shared to her (public!!!!!) page that caught the attention of one of our parents......and then it went viral......... 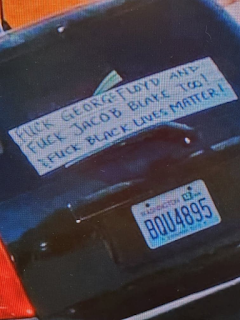 Here comment on this disgusting trash she shared was "hahahaha!" And that's just the tip of the iceberg when it comes to the kind of memes she enjoyed sharing. 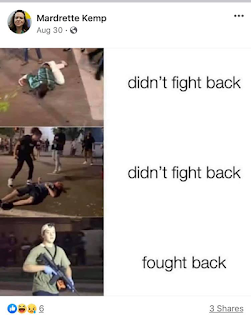 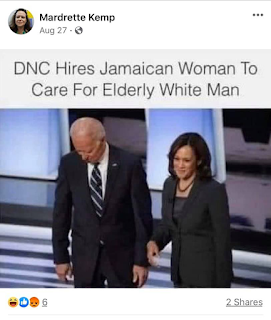 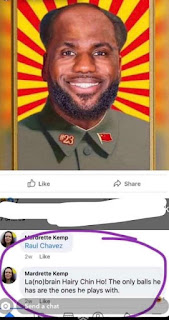 Posts about this teacher's racist posts were shared thousands of times within a few hours. Our phones blew up. Our social media blew up. The district office's phones blew up. The local media was contacted. Television crews showed up in our parking lot a few hours later. It was a damn circus! Some of the teacher's virtual students got wind of all this, logged onto her Google classroom, and started giving her hell before she even knew she was in trouble! Can you imagine? Finally, after an hour or two, our Superintendent showed up. (Turns out the delay was while he talked to our district's legal counsel). Around 2pm he had a meeting with that teacher and her ass got FIRED. And rightfully so!!! And then he released the following statement on social media: 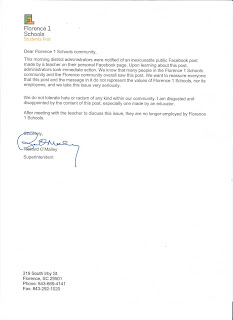 Everyone on social media is praising the quick response of the school and Dr. O. I don't see how things could have been handled any faster or better, so I'm glad for the support. And thank goodness this horrible trash person will no longer be teaching!
So onto the other crazy part of the day: the weather from the hurricane that's traveling over South Carolina spawned three separate tornadoes in our area this afternoon! We had to go into tornado lockdown three times, all in the midst of the personnel crisis. The first time was while the Superintendent was at the school firing the racist teacher! When the shelter in place was lifted, and the teacher was gone, Dr. O looked at me when he was leaving our school and said, "...and the day started out so calm!"  The next two tornadoes caused us to go into lockdown DURING DISMISSAL and instead of sending kids to the car lines or the buses, we had to shelter in place for another 30 minutes after school was supposed to be done.
I tell you what. I was happy to get home and pour a glass of wine!
Posted by Jennifer at 6:50 PM