I took this photo in my backyard the other day. We had no idea they were growing here, so they were a nice surprise in all their spidery glory: 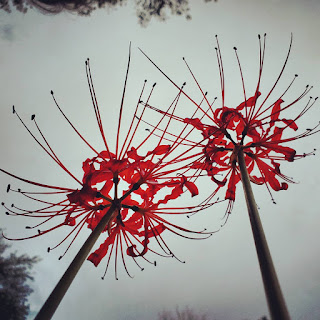 I had to put my phone on the ground to get that angle. In case you were wondering.

For those of you who responded to my last post, here's a photo I took of me and little P. this afternoon in front of the aquarium: 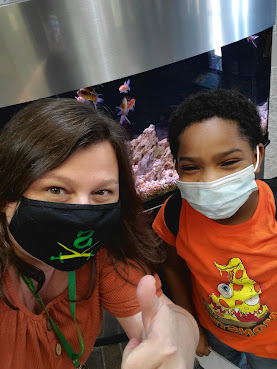 Can you tell he's laughing in this picture? That's because he'd just asked me "how do fish go to the bathroom?" and I responded, "They just let it rip!" and he thought that was the funniest thing he'd ever heard. He kept saying, "When are they going to let it rip?!" and cracking up. I'd forgotten how much little boys love potty humor, even potty humor as mild as that! This kid always makes me laugh. When he got to school today I was standing at the front door speaking Spanish to a family I'd just called a taxi for (they're from Honduras and don't speak any English). He asked me, "Mrs. Barlow, was that real Spanish?" I told him it was, indeed, real. Probably not very good, but real. Ha!

I'm cooking the first batch of homemade vegetarian chili of the season. I put the pre soaked beans (black and kidney) on to simmer slowly in the crock pot first thing this morning. As soon as I got home from work I added chopped purple onion, red bell pepper, jalapenos, two big cans of diced tomatoes and plenty of seasoning spices. I made a lot of it, so after we eat it for a few days this week there will be a lot to freeze in individual portions. Chili is so versatile that I love having plenty of it on hand in the freezer once the weather cools down. Which it has been.

It's a pretty day outside, and tonight it's going to get down into the low 50s. I love this weather! The leaves are just starting to turn a little and the sky is so much bluer when the heat and humidity go away. We've been taking George for an extra walk early in the mornings these days, and we made a nice discovery last week. One of our neighbors has a clearing in the woods behind her house, and just as the sun comes up she comes outside and feeds a family of deer! We saw her the first day tossing ears of corn over the fence and what looked like two does, a small buck, and a baby standing there, tame and looking for their breakfast. Now we see the deer every morning as we walk past, and we stop and stand there and watch the neighbor bring food out to them. We haven't met her yet, but she must be a good sort. And it's a treat to see those deer as the sun comes up and we're out walking around the neighborhood. George is quiet and patient while we watch.

I didn't watch the debate last night. I knew all the highlights (lowlights?) would be all over the news and social media today and I knew I'd never sleep a wink if I got myself all worked up over politics right before bed. I see that 45 called on the Proud Boys (a far right, violent, white supremist group) to be on "stand by" for the upcoming election. I want to throw up when I think about what might happen in the next few weeks. I'm not ashamed to admit I'm frightened. I can't wait until this election is over no matter what comes of it. I've decided the best thing right now is to try not to think about it too much, and to go on with life like normal. Look for the good. Try to be an example of decency and kindness and not contribute to negativity any more than I have to.