Over the past six months or so the boys and I have become consistent twice-daily walkers. We take George out very early in the morning and then again after dark for a lap or two around the half mile circle that is our little neighborhood. Partly because of the timing, but maybe in part because we're actively looking, we see so much wildlife lately. 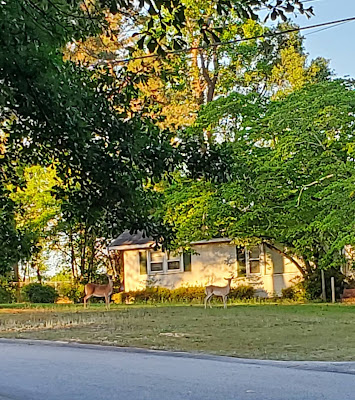 Yesterday I snapped this photo of our neighborhood deer, who are almost tame. (I apologize for the crappy picture; it was my cell phone camera). There were actually three but I didn't notice that until they started to saunter away. George stood stock still and just looked at them, as he's learned to do. We encounter these same three deer (a large female and two smaller animals of undetermined sex) almost every day and we always stop for awhile and just quietly look at each other.  Last night we saw the large one standing in this same yard, close to the road, a big black silhouette under the street lights. Sometimes they'll even lower their heads and graze in our presence! It feels like such a privilege to have them around and to have their trust.
We've been seeing lots of rabbits, too. One of our neighbors has a large shady yard sloping downwards in the back towards a small pond, and the whole grassy hill is covered in dandelions. It's really pretty and that's the yard where we usually spot rabbits. We saw one over there just this morning, in fact. Afterwards we saw a pair of bluebirds flitting around some power lines and pine trees and the male was the most spectacular shade of blue I've ever seen.
It's also that time of year when we see large turtles all around the neighborhood. The other night we saw one crossing the road and I swear it's shell was at least 12 inches in diameter, obviously an older turtle. It's been a couple of weeks since we've seen an owl, but one night early this week we heard two of them making crazy jungle noises in a tall tree. Sometimes I'll wake up at night and if my bedroom window is cracked I'll hear them calling to each other.
Add to all this the cardinals nesting in our pomegranate tree and the little Carolina Wrens nesting in the attic vent slates on our roof, and as I told Gregg this morning, "It's like living in a Disney movie right now!" I like it a lot. Who knew buying a house so close to the creek would be so perfect for nature lovers like us? We feel very fortunate.
Posted by Jennifer at 12:05 PM