Sweet relief, and a garden update

I have a functional neck again! Hooray! When I saw my doctor on Tuesday she gave me a shot in the hip (cortisone, I think) as well as prescriptions for a muscle relaxer and a week's worth of prednisone pills. That night I got my first decent night's sleep in almost a week. That's medicine in itself.

Yesterday morning I started taking the prednisone. I know that oral steroids can cause major problems for people who have to take them long term, but for occasional use they're like a wonder drug. For me, at least. I felt like I'd had a small dose of speed, and combined with the easing of the neck pain and the comfortable night's sleep, I felt good yesterday. I gave the kitchen a fairly thorough cleaning and mopping, dusted a couple of rooms in the house, watered the garden, and then made it to book club to see my friends!

Marian was hosting this month, and she has a pool, so we wore our swimsuits and had our meeting out there. And that felt positively heavenly. Floating on my back in the cool, cool water was almost as good as a massage for my poor tense muscles. It's a salt water pool, too. I felt so relaxed and comfortable when I left that when I got home we took George for a leisurely late walk around the neighborhood. Another restful night's sleep and now I feel like a new woman. Oh, the relief!

I'll leave you now with some recent pictures of my garden, which is growing like gangbusters. Today I'll pick my first vine ripe tomato (dozens more will be coming along shortly), and I've already had two or three cucumbers and lots of peppers. So far there are at least 6 baby cantaloupes growing and the bees love those flowers so I'm expecting even more. My first garden at this house has been a delight so far! 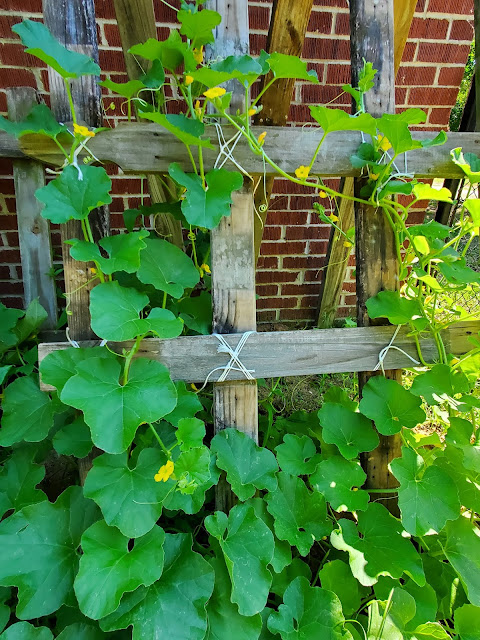 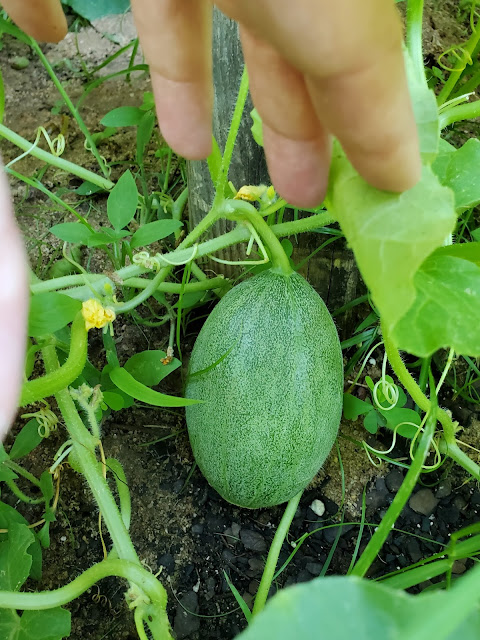 French marigolds I started from seed. 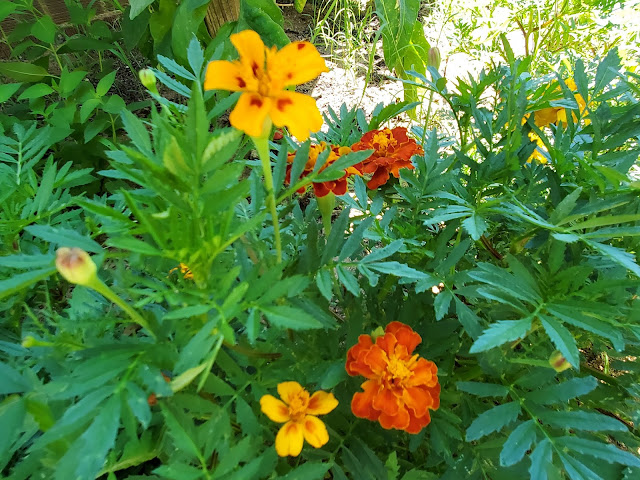 I plucked a "sucker" from my San Marzano tomato plant and started another one. 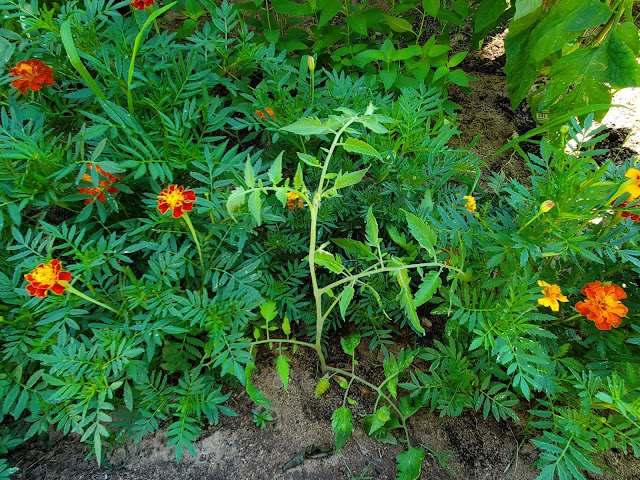 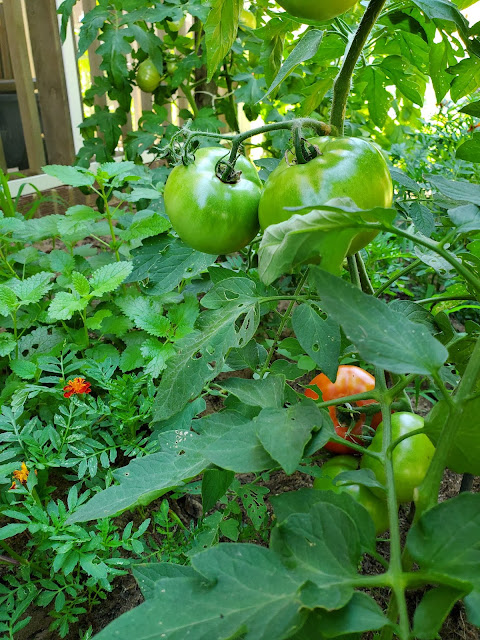 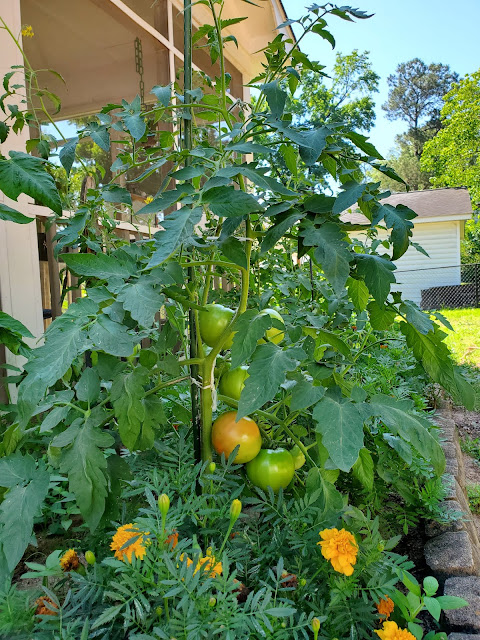 Nasturtium flowers started from seed, now growing happily around the base of the banana plants. 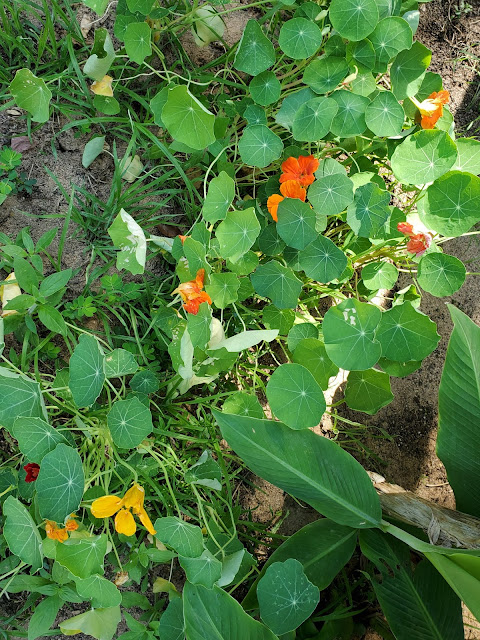 Shhh! Don't tell anybody! These pond plants are illegal to sell or have around here because they can be invasive. A friend of Gregg's gave him these from his little backyard pond. Of course we're responsible people and would never allow them to end up in a local waterway. And aren't the flowers pretty? The dragonflies, frogs, birds and squirrels love this little container pond too--we're providing drinking water to the wildlife! 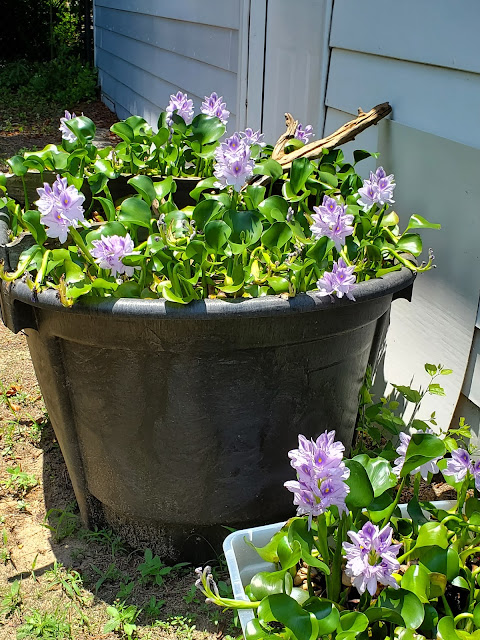 The first tomato, plucked this morning. It weighed in at just over half a pound. 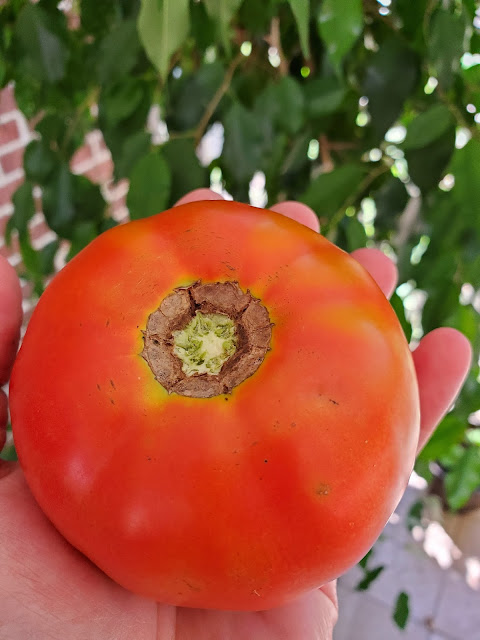 The cucumbers on this salad came from my garden yesterday. 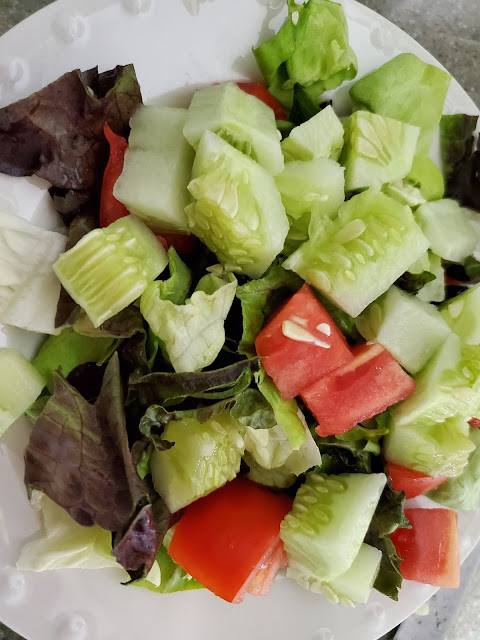 Finally, a few jalapenos I plucked yesterday. I've started slicing them in half, filling them with soft cream cheese, and wrapping them in bacon. Jalapeno Poppers for the grill! 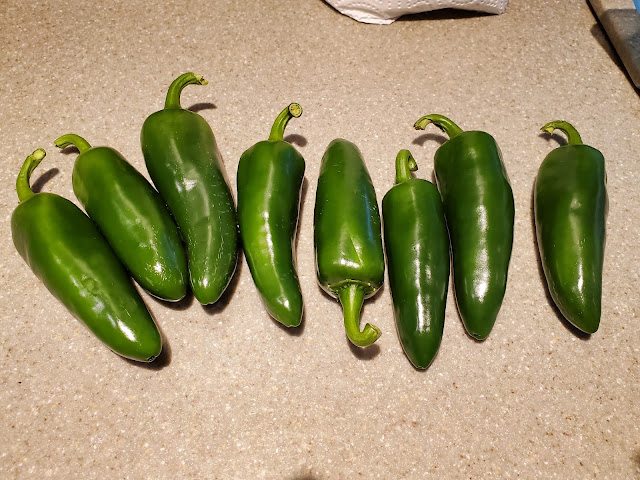