The marigolds I started from seed to serve as a kind of living mulch have surpassed all my expectations. I never knew marigolds could grow so big and tall and lush. Butterflies seem to love the flowers; I saw another species yesterday and took some pictures. 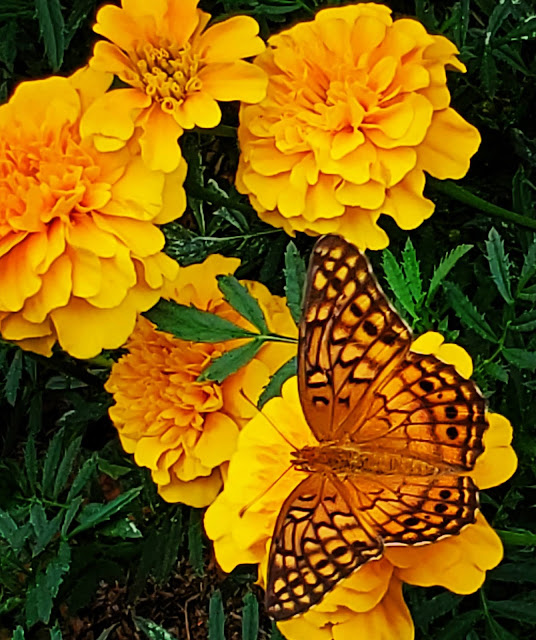 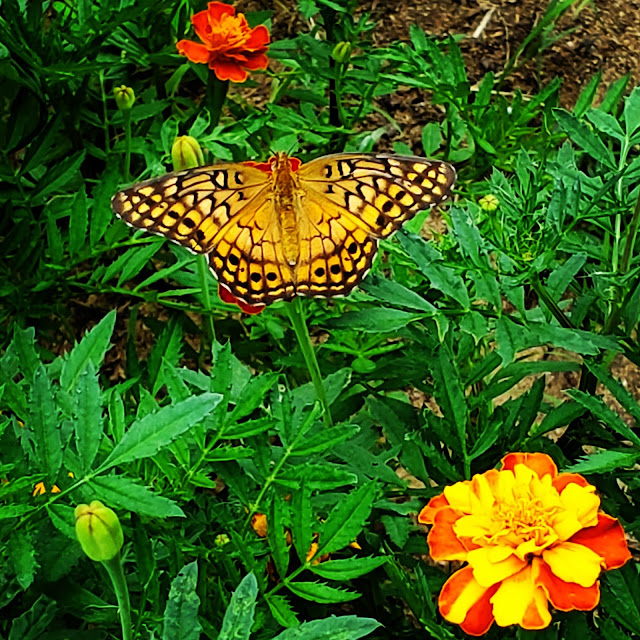 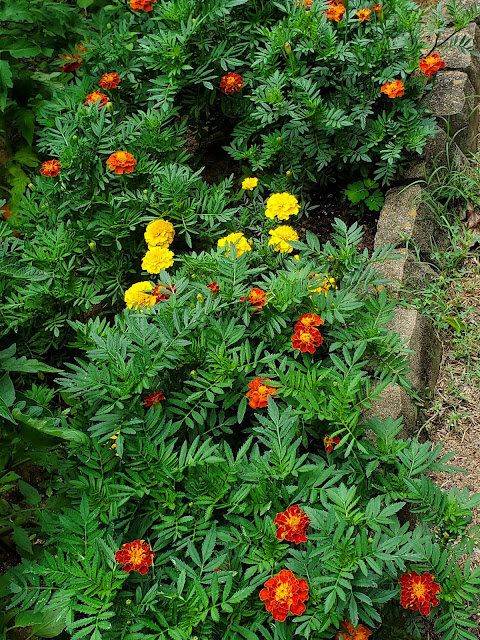 Planting all these marigolds under and around my tomato plants instead of mulching really seems to have worked out. The only pests I've had to deal with were a few hornworms, which I caught early and picked off before they had a chance to do much damage. A close inspection of every plant every day really pays off.
I've been weighing the tomatoes as we pick them and keeping a log of their productivity (and taste) for future reference. So far we've harvested 11 Celebrity tomatoes with a combined weight of just over 5 pounds. I knew they would likely be first, and that they would taste okay but without the richness of heirlooms and later varieties. I planted them for earliness and quantity, and so far I've been pleased with them. They still have lots of green unripe fruits coming along. One surprise is that we've already gotten 4 Brandywines totaling 2 pounds. These are the tomatoes I've been most excited about, and for good reason. The flavor is outstanding, rich and fruity and complex. We also tried the first two Red Beefsteak last night. The flavor was so-so, not as rich and complex as the Brandywines but it did have one advantage: thick meaty fruits without very many seeds. If it proves to be productive it might be a good choice for canning in the future. Speaking of canning tomatoes, I have one San Marzano tomato plant which has produced a few of its paste-type fruits, but the plant has been spindly and weak almost from the beginning. I took a cutting from it and have started another one to give it a fair shot, but if the smaller one proves to be as wispy and  unproductive as the first, I won't be growing it again. We're still waiting on ripe tomatoes from German Queen (lots of big beautiful fruits coming), Mr. Stripey (a few fruits are still ripening on it) and Bonnie's Centennial (loaded with big, almost-ripe tomatoes). I'll report back on how they taste later on. Oh, and one other plant is filling up with tomatoes. I bought it as a seedling and it was supposed to be a Husky Cherry Red, but was obviously mislabeled. The clusters of tomatoes on it are much bigger than cherries so I have no idea what it could be, but it is a sturdy, low growing bush. We shall see!
My cucumbers are barely producing anything. I'm not sure why, since there are lots of flowers and the bees love that area of the yard. They're planted beside the cantaloupes which have also been flowering like crazy. We have several small cantaloupes slowly ripening right now--I can't wait to taste one! 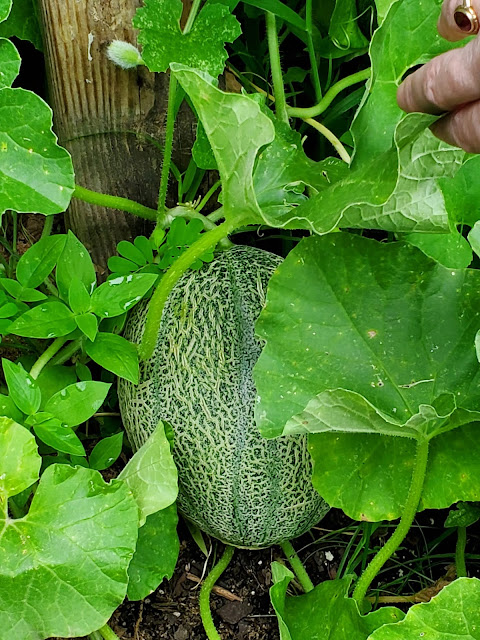 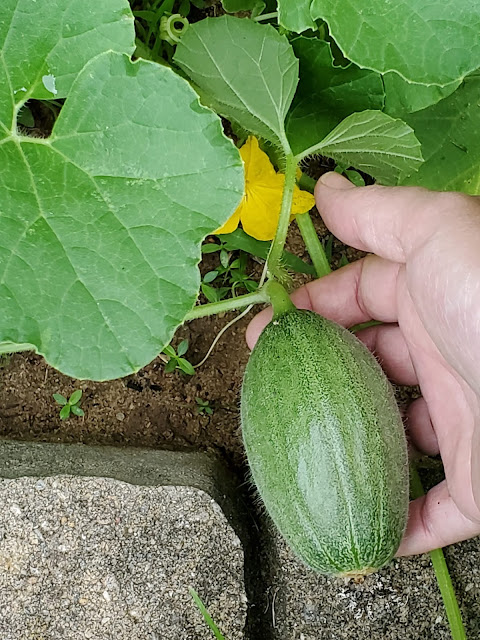 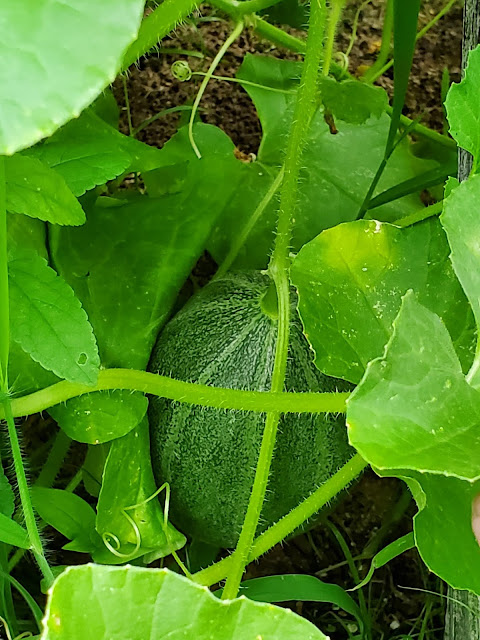 The jalapenos are doing really well. I'm leaving most of them unpicked for now so they'll have a chance to turn red. After that I'll be pickling some of them and maybe making salsa with the rest.
Also, some of you may remember that I potted up an ornamental pomegranate into a big concrete planter. Well, it's been blooming up a storm in the past week or two! Too bad the fruits are ornamental. I had lots of blossoms on my regular pomegranate this year, but they all fell out and didn't develop fruit. I'm not sure why--possibly they bloomed too early for pollinators to get at them. That's not the case with this ornamental, though. Not only do we see bees all around it, but yesterday we saw a  hummingbird sipping from one flower after another! 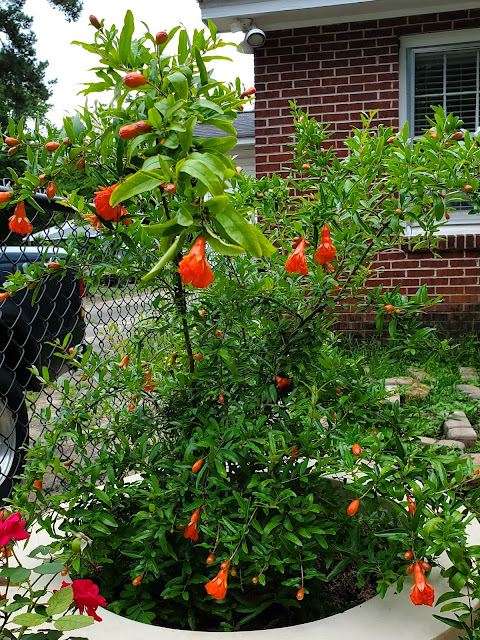 That's most of the news from the garden right now!
Posted by Jennifer at 1:38 PM