Sunday afternoon was a day to remember. Marco got away from us, flew up into a tree, and refused to come back. We were scared that he was gone for good!

The way it happened was like this. Gregg was on the back porch working on some projects with Marco riding around on his shoulder. After a while, he forgot he was on there, and without thinking walked out the door to the backyard. Mistake. Marco immediately took off and ended up in a big tree on the edge of our yard. We spent an hour and a half trying to coax him down, to no avail. We offered him his favorite treat (walnuts), we called his pal Georgie to come out to stand with us under the tree, we pretended to start walking back to the house while cheerfully calling for him to come with us, we demanded he come down, we shouted. We even threw a rope over the branch underneath him and shook it to try to scare him down. Nothing worked. The little bastard crawled around on his branch, chewing on leaves and occasionally responding to us with "Hey baby!" "Whatcha doin'?" "Woooo!", and, infuriatingly, "C'mere! C'mere Marco!" I swear he even laughed a couple of times. It started to get dark and he seemed to be perfectly fine with the idea of sleeping up in the tree with his newfound freedom.

Finally, out of sheer desperation I took a chance on a pretty extreme solution. I went and got the hose, turned the water all the way to the "on" position, set the flow setting on the nozzle to "jet", and I blasted his ass out of the tree with a mighty gush of water. He fluttered down to the ground at our feet, dripping and stunned, and we grabbed him up and took him inside. I couldn't believe it had actually worked. So Marco is still with us, safe and sound, and having learned nothing. 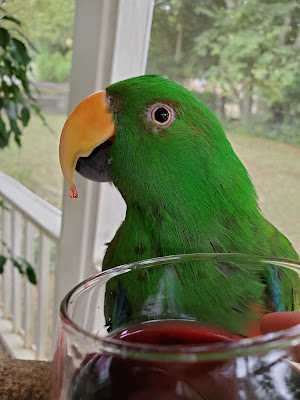 The next day, stealing a sip of my wine.

The rest of this week so far hasn't been much better. Gregg had to visit a dermatologist recently and he found out he has another basal cell carcinoma on his face that must be removed. It's right beside his nose whereas the previous two were on his forehead. All those years of sun exposure on his fair skin are catching up with him. He's been pretty bummed about it.

Work continues to be busy and stressful with Covid still spreading like crazy around here. Another friend of ours got sick this past week and felt like he had a horrible case of flu even though he's vaccinated and very careful. In fact, it's the friend that helped us get our vaccines relatively early on. He works in a hospital so I guess he's exposed to Covid more than most. At least since he was vaxxed he didn't get sick enough to end up in the hospital himself, though. Just last weekend, an unvaccinated young mother who teaches in the school district next to mine died from it. Her reason for not getting the shot was that she was breastfeeding her youngest child and was afraid it might hurt him. Now he and his three siblings are motherless and her family is begging the community to get the vaccine so no other family will have to go through the pain they're experiencing.  This teacher was healthy and active (she coached volleyball) and was only 28 years old. When are people going to wake up and take this virus seriously? How many more people need to die first?

Speaking of illness, you might notice I'm posting this at an odd time of day for me. I'm at home taking a sick day. Last night out of nowhere I started feeling like I had the worst heartburn of my life. I was walking around, trying to get my stomach to settle down, and all of sudden I started throwing up violently. It was really strange and upsetting. I feel better today except for a bad headache, but decided to stay home just in case I have a stomach bug. I hope that's all it is. This Delta variant is known to have some unusual symptoms sometimes.

What a week so far, and it's only Thursday!