Another one of those days

Lucky me! I started feeling the unmistakable signs of a UTI yesterday afternoon right before I left work. Talk about a miserable night! I went to the doctor this morning and had my self-diagnosis confirmed, and a prescription was called in for me. Hopefully I'll have some relief soon. In the meantime I have a massive headache, so along with the antibiotic I took some ibuprofen. In the next few minutes I'll be headed back to bed for a good long nap--if Marco will cooperate and stay quiet for a couple of hours, that is.

Of course, I had to call in sick to work today. I'm sure the two most catty, backbiting, gossipy women who work in the office with me are having to help fill in, and I'm equally sure they're both complaining and trash-talking me. They do with everyone else, after all. Oh well. As long as I'm on good terms with the principal (and I am) then that's all that really matters. I almost never call in sick, and he knows that, but I still got a note from the doctor to excuse the absence.

To add to all this fun, last night we realized that the water coming out of our pipes is light brown! After getting in touch with a couple of neighbors, I found out that such was the case in the whole neighborhood. I called the after-hours emergency number at the water department last night, and then the regular number this morning. The woman I spoke with today told me that they're aware of the problem and would be coming out to fix it. In the meantime, we're using bottled water for drinking. Who knows what's coming out of the tap right now!

What a day it's been, and it's not even noon yet! 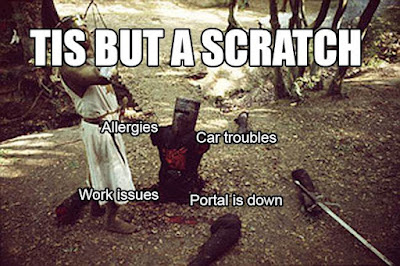