The search for a crabapple tree was a total bust. Although there were two or three vendors selling good-size fruit trees at the festival, the only apples were standard size varieties, not crabs. One Asian family had the best selection of trees, but (and this shocked me) they had never even heard of crabapples! It made me wonder if they were just running the stall for someone else. They obviously didn't know much about trees in general. Their little son was adorable, though, and kept trying to help me (aka sell me something). After making calls to several local nurseries, it looks as though we'll have to order a crabapple tree online if we're going to get one. I'm surprised by that. 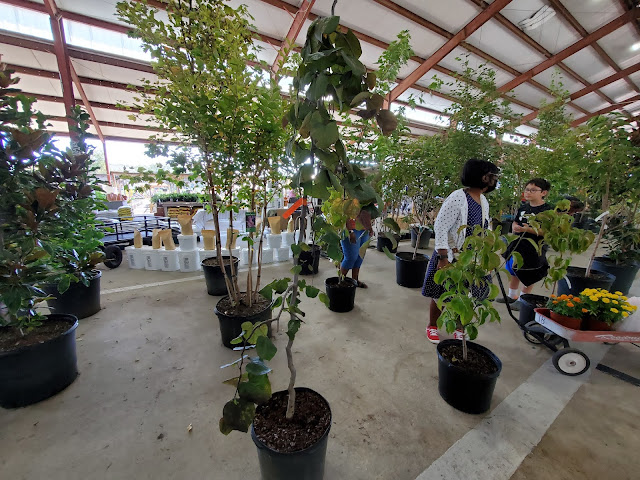 It was still fun to look around the Fall Festival, though. I had a corn dog and fresh lemonade for lunch, then bought a big bag of fresh apples straight from the North Carolina mountains to bring home. King Luscious, Rome, Granny SmithIt , Fuji, and Golden Delicious were the varieties I picked. I'm planning to make pie tomorrow, but I like them just as well fresh and eaten in thin slices.

Speaking of apples, I've been on the hunt for a food dehydrator. No one around here seems to carry them in store so it looks like I may have to use Amazon to get one. I would love to start making apple and banana chips for healthy snacks among other things. 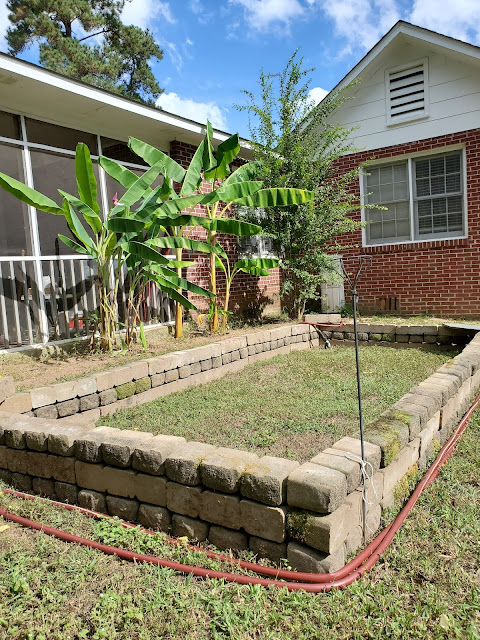 Yesterday I began building a raised bed for next year's garden in my back yard with the border stones that were here when we moved in. There's still some work to do, but I'm excited with how it's turning out so far. You can see the bananas in this picture, and don't they still look good? That's because we keep trimming off all the yellow leaves! They'll be gone before too much longer.

This afternoon I had lunch with two friends and that was really nice. I had a yummy grilled chicken Greek salad with pita bread and tzatziki on the side. 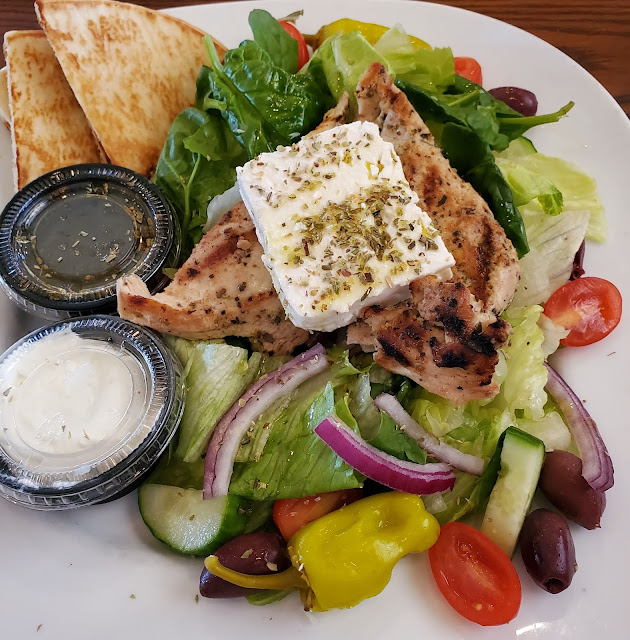 It was so good to see Marian and Paulette! We passed a pleasant hour, talking over our lunches.

Now I'm back at home, spending the afternoon with George and Marco. I'm making homemade soup for the first time this fall for our dinner tonight, and the house smells wonderful! It's not all that cool outside, but it is overcast, so soup seems appropriate. It's fun to cook and do things around the house on a weekday when one would normally be at work! I'm enjoying this little break.