Another long week at work finally came to an end. This has seemed like the longest school year ever. It's as though the two years of Covid have just bled into one another and combined to form one long, crappy year.

Things are not going well at our school. There's a huge exodus happening in which more than a dozen teachers and other staff are either transferring to better schools in the district or else are fed up and retiring (those who have enough years in to retire). Little P.'s mom has been so mistreated and bullied by some of the same people that used to cause me problems that I'm afraid she's going to be the next to go. No one likes to work hard, try hard, and then be at the mercy of petty, backstabbing, lazy people with no scruples. I feel so bad for her. Then just a couple of days ago yet another of my favorite teachers told me she's leaving. She said the stress is starting to negatively impact her health and she's had enough. It's the best teachers and staff who are leaving, naturally.

It all makes me sad. Morale is so low that a feeling of gloom pervades the halls. We keep hearing that the principal will be leaving at the end of the year, either by quitting or else being sent somewhere else (I've even heard a rumor that a specific woman who's currently at another school will be replacing him) and honestly.....it would probably be for the best. I hate to say that. I like him a lot as a person but as a principal, well....the buck stops with him, so to speak. I'm just laying low, doing my job, and hoping for better things. What I want is to feel pride in my school again, not to mention a promotion to a better paying position. I'm finishing up my 5th year and I think I've earned it.

At home, though, things are really good. My garden is coming along nicely. Today I harvested the first radishes and soon there will be lettuce and carrots to go along with them. My tomato and pepper seedlings are ready to be potted up and by the end of the month I'll be planting them in the raised bed. The bluebird box we put up last month has a pair of Carolina chickadees nesting inside! They're such cute, sweet little birds that I'm not sorry to have them instead of bluebirds.

Last night I went to a community theater play with Martina, her husband Will, and one of the veterinarians that she works for. We had so much fun! Gregg isn't a fan of community theater, nor musicals, which is what this was, so he didn't care to go. He was amused to find out that our family doctor was part of the ensemble cast, though, and I took a photo of her after the performance to show him. At one point she was tap-dancing in an egg costume, which made him laugh when I told him about it. He said he would have liked to have seen that! 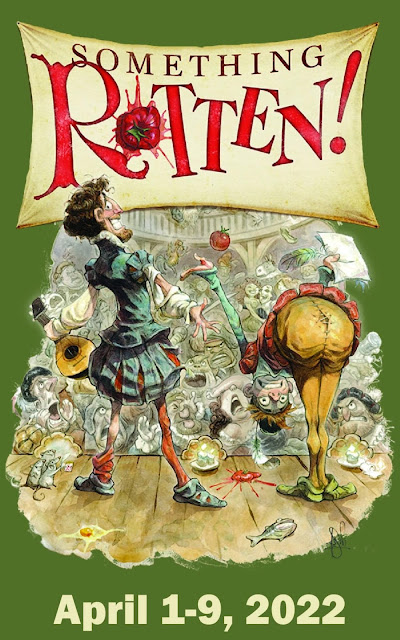 This is no joke!!! It’s OPENING NIGHT of Something Rotten!! Join us for a night of laughter, big-hit musical numbers, and of course, those tap dancing eggs!!!

Tickets are still available for tonight’s performance and can be purchased at the door starting at 6:30pm! 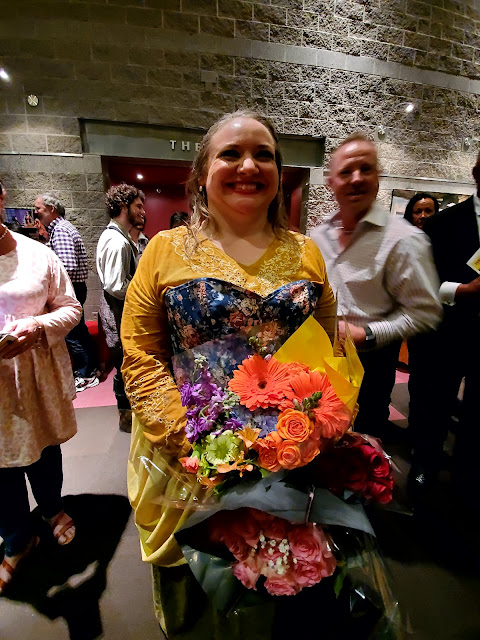 Doctor Shelton after the show! The guy with dark curly hair behind her was another local physician who played William Shakespeare. It was lots of fun.

One other thing of note this weekend is that this morning I met a sweet little puppy that my neighbor (the dog rescue person) is fostering until a good home can be found for her. Gregg is going to meet her either tonight or tomorrow, and we might consider trying to introduce her to George. She's right next door so it should be easy to take her on a trial basis if we decide to. I put her on a leash this morning and walked her around our property (George was in the house). She acted right at home and didn't seem to want to go back to Heather's house. We're not going to rush into anything, though. And George may not allow it anyway. 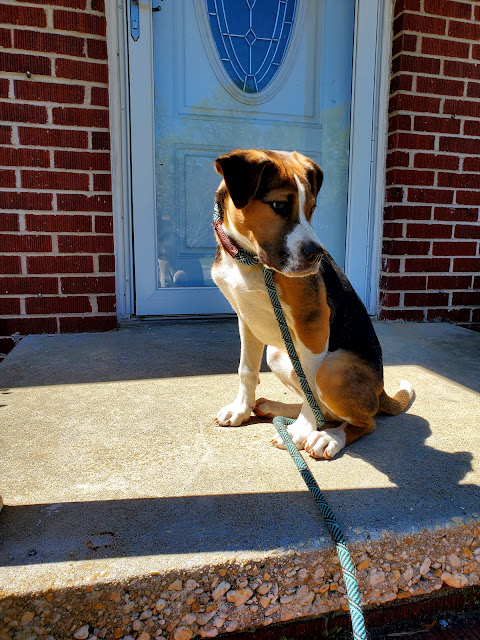