It's been an eventful week.  We brought Poppy home last Wednesday night, just as my spring break was starting, and that proved to be good planning. I can't imagine dealing with the first few days of a new puppy in the house while going to work! I still have the rest of this week off, and things are already settling down a little bit.

Poppy is a real delight so far. She's super smart, sweet, and incredibly playful. Having never gotten a dog this young, this is all new to me. Also, I need to give my George a big shout-out. He's been incredibly patient with the puppy. She follows him around, dives on him, brings him toys to try to entice him to play, and he usually just lets out a heavy sigh and ignores her. Every now and then, when she jumps on him once too often and attempts to bite at his ears with her needle-sharp puppy teeth, he issues a quick but stern correction. Ginger used to do the same thing to him when he went too far! In fact, Ginger helped us raise him, and now it looks like George will do the same thing with Poppy. He already seems to accept the fact that she's going to be living with us now. What a good boy! 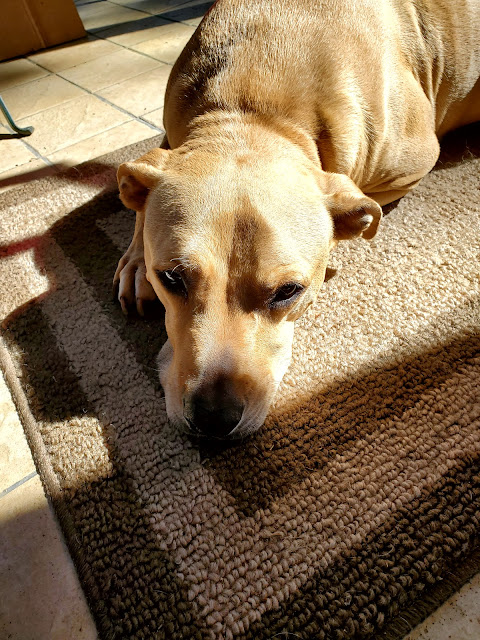 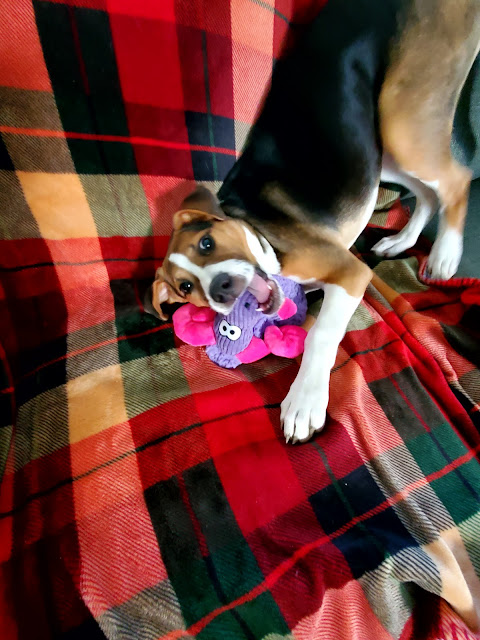 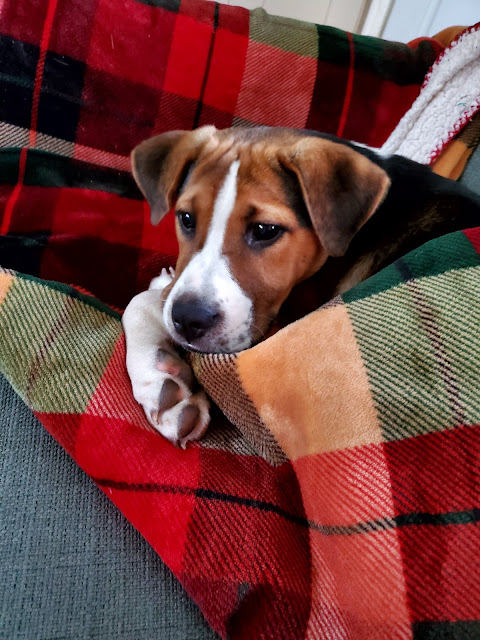 We had a pretty good Easter. I cooked a ham, deviled eggs, rice served with glazed ham drippings, green beans, and fresh salad (lettuce and radishes) from my garden. I picked enough salad from the raised bed that I was able to share two big ziplock bags full with Ms. Luella next door. I can't wait to harvest some carrots--they're not quite ready yet. 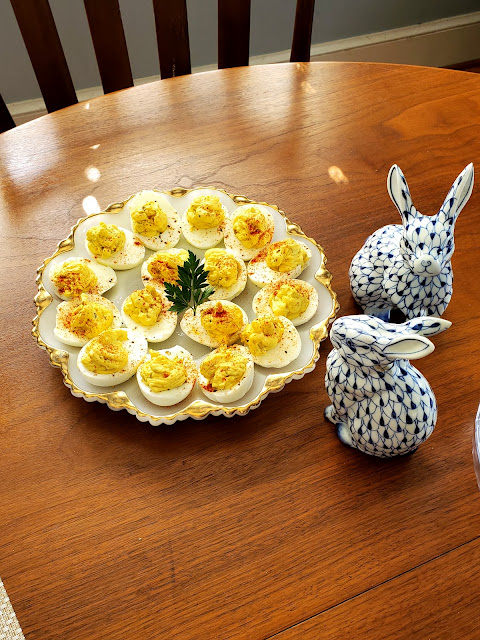 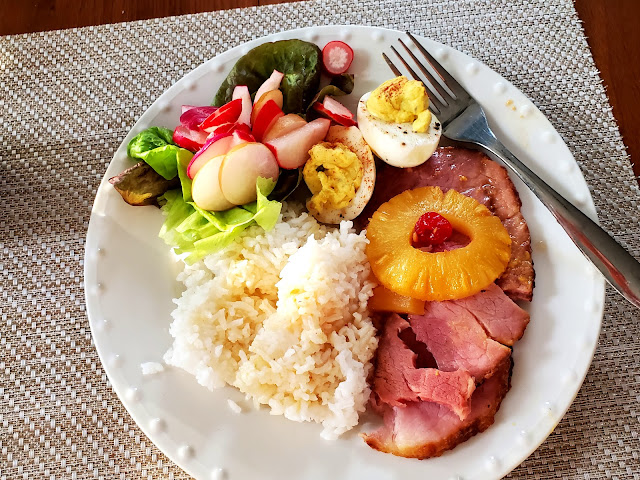 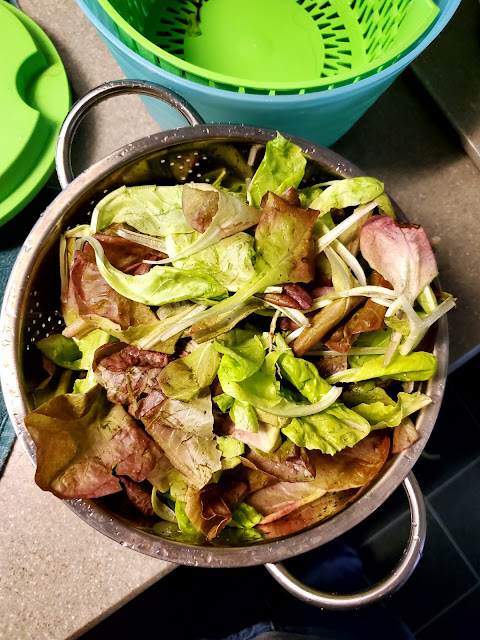 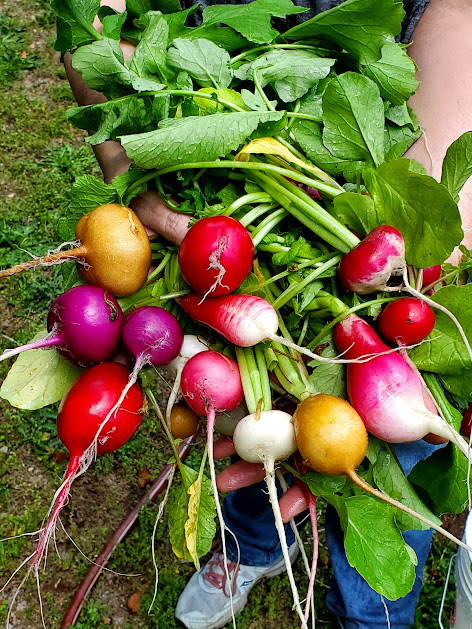 Did I mention that I'm growing some potatoes in a large container as an experiment? It's the method of growing potatoes where you slowly add layers of soil around the plant as it  grows until you reach the top of the container. (You start off with a thin layer of soil in the bottom). Here's what my potato bush looks like as of this morning. 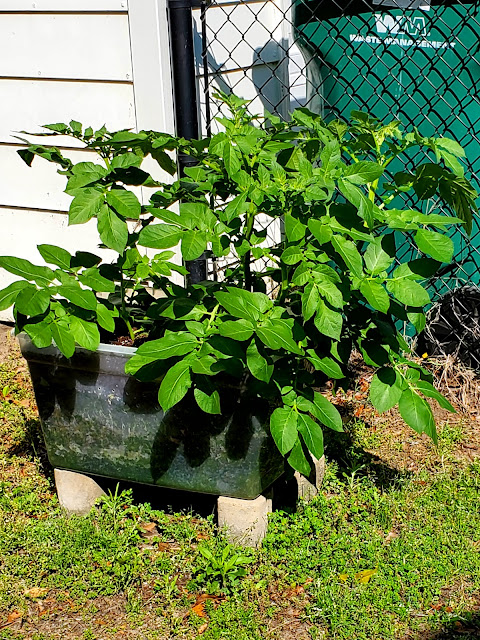 The only other thing of note going on this week is that my seasonal allergies have gotten so bad that my asthma has been kicking in. I had two or three nights of wheezing and getting short of breath despite using an inhaler, and I haven't been sleeping well. Yesterday I decided that if I had another restless night I'd call the doctor and go see her today. I feel a little better, though, and slept fairly well last night. I'm hoping a trip to see the doctor can still be avoided.
All in all, it's been a wonderful spring break so far! A new puppy, a thriving garden, sunshine and nice weather--even the crabapple stick tree we planted in the front yard has put out its first tiny leaf buds! The chickadees nesting out back obviously have babies right now, given how often they're flying in and out of the nestbox. And on Easter Sunday I saw the first hummingbird of the year--about 15 minutes after I hung the feeder up for the first time!
It's a really nice time of the year to have a vacation.
Posted by Jennifer at 12:17 PM