Things are moving along with the new aquarium we're setting up at my school. Thanks to the pandemic, some supplies that we were hoping to get (for the aquascaping) are hard to find right now. Before heading to the school yesterday, Gregg scooped up every last bit of "dragonstone" that he had at the pet store to see if it would be enough. Although we didn't have as many big pieces as we were hoping for, I think we'll be able to squeak by with it. A small pile of rocks (rocks!) was $150 worth and we could definitely use more.

I snapped a picture of the empty tank to show you all after we put it in position in the lobby. 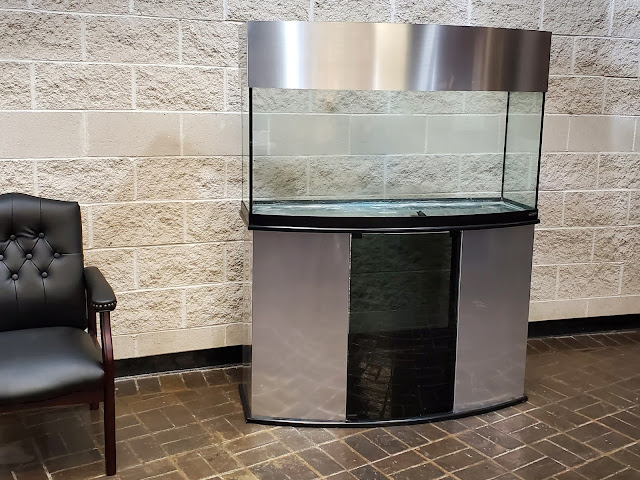 Of course, more photos will be forthcoming as soon as it's up and running.

Gregg also had to clean the planted aquarium in the school library. He's been maintaining that one for at least 8 years now, and it's his favorite of all the tanks he services. The plants are healthy and thriving, and the fish are gorgeous. Here's a picture I took of one of them, a Diamond Tetra. It's hard to get a good picture of a fish, but it's not too bad. 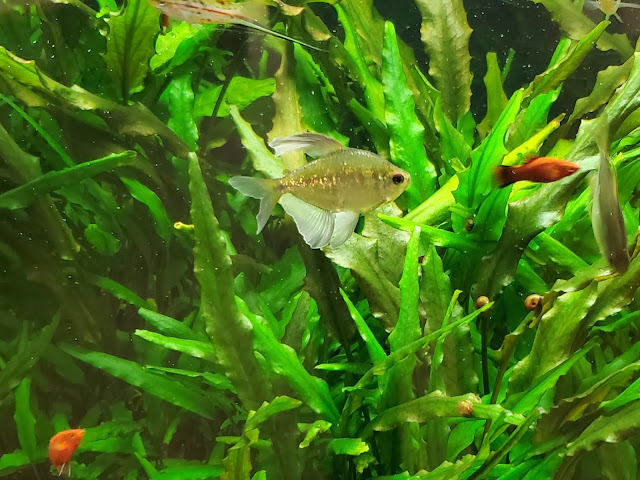 The library is getting new carpet this week. The principal had to fight with the head of maintenance to convince them that having Gregg move this tank to put carpet underneath it was a bad idea. They finally saw reason and decided to put the carpet down around it, much to Gregg's relief. He says the tank might never be the same again if he had to break it all down and then set it back up anew. We were so grateful to Mr. Oates for going to bat for us on that issue! Not only would it ruin years worth of extraordinary aquatic plant growth, but everything (including the wet substrate) would have to come out to make the tank light enough to pick up and move. Talk about a work intensive process! So that was great news. It had been weighing on Gregg's mind.

Also, while Gregg and Mr. Oates were talking, I walked up in time to hear Mr. O saying really nice things about me. Something about I was a blessing to the school and "I don't know what we'd do without her." Now, wasn't that nice?! I was taken off guard and I could feel myself blushing. It made me feel so good, though! That's been the highlight of my summer so far.