Another week slips by

I just got into an argument with somebody looking to troll a friend's post on Facebook. You'd think I'd know better by now. I did have the slight satisfaction of pissing off a young white guy so much he said I needed to have a look "at what the bible says about women attempting to educate men!" and I nearly spit out my drink when I burst out laughing.

So. That was rather nice.

Anyway, how have you all been? It's been a long empty week here at Casa de Sparrow without much to recommend it. Covid-19 cases are still rising alarmingly in this state. Things are so bad all of a sudden that there's talk about schools not opening after all in August. I can't help but fret for my job. Gregg is working more hours at the pet store to make up some of his lost income. I worry about him being exposed to the public, but who knows when his maintenance jobs will come back. Three of the best paying ones are in nursing homes and there's no end in sight for those places being under quarantine. Of course with a significant chunk of his income being gone, we're having to tighten the purse strings. Which is fine, but it's getting a little old. So many of the things I need/want to do around the house require money, even in small amounts, and I'm trying really hard to strictly limit unnecessary spending. I shouldn't complain. I know that some of it is just sheer boredom and a desire for escape of one sort or another. I've also been drinking more than usual, just to relieve the tedium of the long evenings.  (I know I need to be careful with that, and I am). Have you been turning to drink, or food, or anything else, during these strange times?

As for food, I'm lucky that I haven't been overeating all these months. I've been doing a LOT of cooking and even baking, but I find that the more work I do in the kitchen, the more easily satisfied I am with small portions and just having a "taste" here and there. And the fresh produce from the farmer's market has been a daily part of every meal I make. 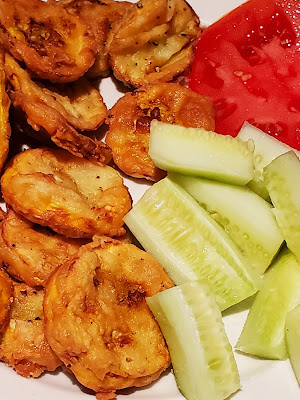 This was my dinner the other night. Fried yellow squash along with fresh cucumber and tomato slices, sprinkled liberally with sea salt and, in the case of the cucumbers, apple cider vinegar. Not the healthiest way to eat the squash, but absolutely delicious.

And here was dessert: cherry cobbler. 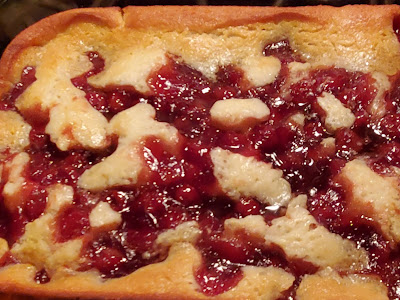 This was taken when it was still bubbling hot, straight from the oven. It was so rich, I only had a small portion.

So that's been my week, friends. Cooking, sitting around, a lot of reading (maybe I should do some book reviews here) and a lot of waiting to see what's going to happen in this state with the virus situation. This is not the summer I was hoping to have! Tell me how things are going with you.