Yesterday was as nice an anniversary as we've had yet, even though we just stayed at home. The weather was good (a cool breeze was blowing, a rarity in June) and we sat on the back porch in the afternoon reminiscing about our wedding day and honeymoon. We saw the pair of Painted Buntings at the feeder, too, after several days of not seeing them at all. I had begun to suspect that they had moved on, but nope, there they were! That was like a gift!

Our dinner was nice. The Buttermilk Lemon Pound Cake turned out great! I was a little sad that the glaze/icing on top didn't look as pretty as the picture on the recipe, but I'll correct that the next time I make one of these cakes. And I will make it again--it really is delicious.


Here's a link to the recipe if you're interested: https://www.onceuponachef.com/recipes/lemon-buttermilk-pound-cake.html

For our main meal I made Chicken Fettucine Alfredo and bruschetta with heirloom tomato topping. It was also delicious! This was my first time making real alfredo sauce with heavy cream, and it was so much more flavorful than stuff bought in a jar! Easier than I expected, too. I'll definitely be making this again. 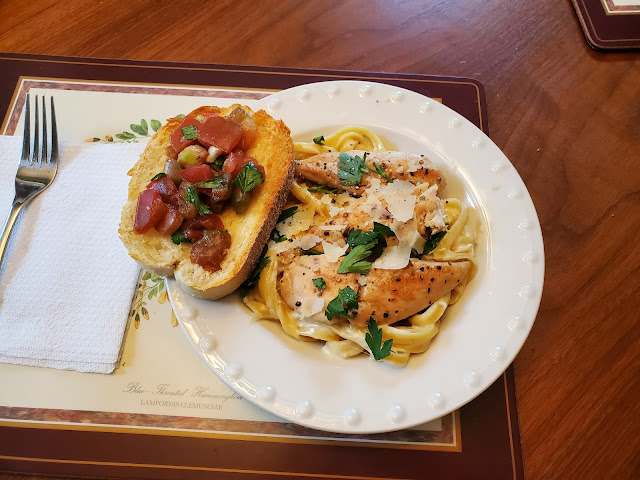 After dinner and dessert, I had champagne. I talked to a guy at the liquor store and asked him for a recommendation for the best bottle in my price range (in fairness, pretty low). He suggested this, which I was kind of disappointed in...oh well. 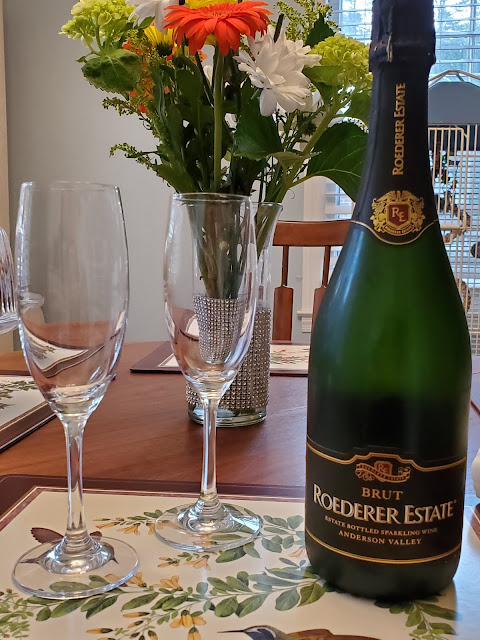 After the first glass or two it went down just fine! :)

*Side note: you know you're in the firm grip of middle age when simply removing the stubborn cork on a champagne bottle makes you pull a muscle in your side! I had to laugh at myself over that one!

In other news, I had a frantic voicemail this afternoon from my 81 year old next door neighbor, Miss Luella. She said "Call me back right away, please!" What the what?!?     It scared me, so of course I called her back as soon as I got the message.

She's tested positive for Covid-19. The reason for her calling me was that I knocked on her door two days ago and gave her half a watermelon. Gregg won't eat them, and I can't finish a whole one, so I often will give half to friendly neighbors like her. Since I didn't go in her house (just knocked on the door and handed her the melon) and we talked for less than a minute (with me standing outside) she said she didn't give my name to DHEC for contact tracing since it didn't meet their criteria for it. She says she's run a low grade fever twice but now she feels fine except for a slight cough. She said she was shocked that she tested positive because she's "been so careful!" and despite saying over and over again that she didn't know how she caught it, she finally admitted that one of her grandsons and his wife and kids tested positive, too. They had a cookout for her oldest son's birthday at her house last week. WHAT THE HELL! When will people understand that gatherings of family that you don't live with are dangerous right now?! Covid-19 cases in South Carolina are skyrocketing. We're having 25% increases in the positive cases every single day for two weeks now. My husband's return to work is going to be short lived, I'm afraid.

I'm sure we're not in any danger from my neighbor given how limited our contact was, but it still serves a warning that now's not the time to get complacent. Next time, I'll just keep the whole damn watermelon and throw away what I don't eat! (Or else avoid buying them altogether this summer). And I was just trying to be a good neighbor! Just my luck.