It's good to have a sense of purpose. After all these weeks of staying at home, feeling aimless and disconnected from the life we had pre-pandemic, it's nice to have a reason to get up in the morning and something to work towards. Even small things make a difference.

I've been up to the school several times in the last week. First of all, the principal called and asked me to come down to the school and if I'd do him a favor. Our phone system got updated and now there's a menu when you call, one of those "press 1 for so-and-so, press 2 for....." recordings. Since I do most of the morning and afternoon announcements, and everyone claims I have a great voice for it, the principal wanted me to be "the voice of the school" and record the menu options for the phones. I was happy to! I ended up having to drive down to the district office and meet with the head of technology to make the recordings, but it only took a few minutes. Later that afternoon, the principal called me up and gushed about what a great job he thought I'd done! This will actually benefit me more than anybody; I answer 90% of the calls to the school (maybe more) so this will divert a lot of those calls to the person they're meant for instead of going through the main office. Hooray! It's something we should've done years ago.

Then I spent all day at the school on Monday, helping Gregg set up the new aquarium in the lobby!  For those of you keeping up with this project, here are two photos I took after everything was up and running. Since the fish aren't in there yet, and two powerful filters are running, the water is so glossy clear that one of the passing custodians asked me if there was water in it yet! 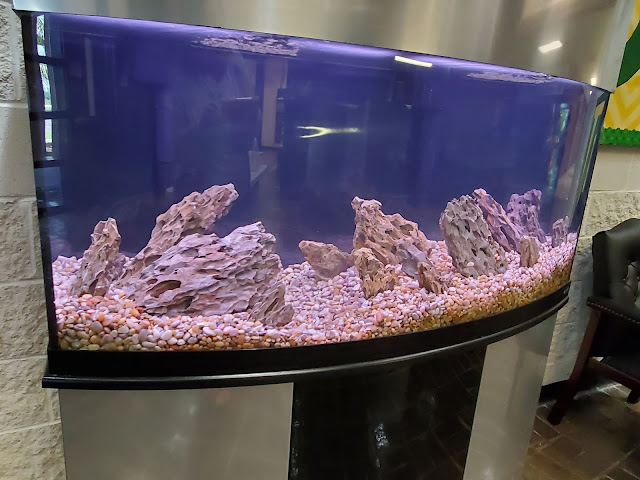 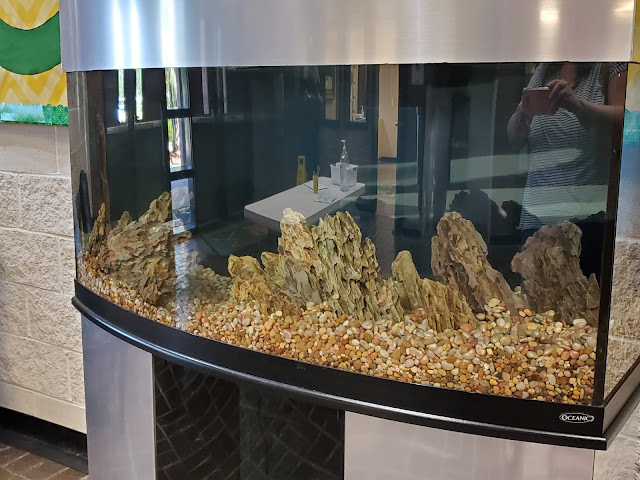 I love the stark rocks and the spare aquascape that Gregg came up with! It mirrors the design of the tank, stand, and hood really well. It's going to look great once the Shubunkin goldfish arrive.

Even wholesale pet suppliers are experiencing disruptions in supply chains due to the pandemic, but Gregg was able to get a bundle of the goldfish into the pet store after calling a long time wholesaler contact in Atlanta and asking for a favor. He picked out the best dozen for our school. They're in a small tank at the store right now, but as soon as he's sure they're healthy they'll be coming to their new home! Eventually a 72 gallon tank (that's what this is) will be far too small for a dozen goldfish, but it'll be a while before they get that big. They're only 3-4 inches right now. The long term plan is to have either 3 or 5 large, wiggly, pet-like fish living in this tank, whichever ones grow out to be the prettiest. They should end up between 8-10 inches long in a few years if all goes well. Of course, Gregg will re-home any extras from the original dozen. 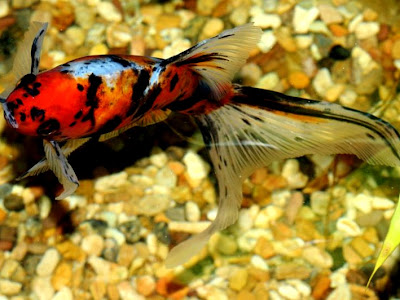 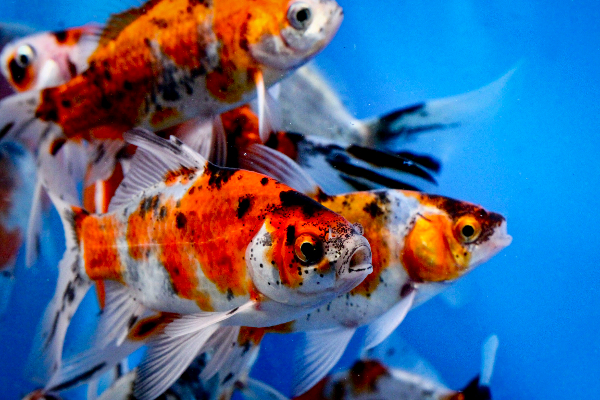 The principal and the few staff members still working right now seem to love the new tank!
It's prominent in the lobby and should get a lot of attention when school reopens. Gregg was able to get us a good deal on everything, and he decided not to charge the school for the labor to set the aquarium up. That and the tank itself is his gift to the school. I'm so proud of him! Of course, he'll be making a little extra money each month for maintaining a second tank, but even that he's cutting them a break on. My husband is a really good guy. :)

Helping him set up the new tank, recording the messages for the phone system, running by the school today to drop off an invoice for the bookkeeper....all this has kept me just busy enough in the last several days to make me feel better. I've still been struggling to find purpose in my days. If ever I thought a lot of time off work and time to stay at home sounded appealing, I've been disabused of that notion in the last four months. I hate sitting at home day after day. Maybe if there wasn't a pandemic and I had all this time off it would be okay, who knows. For instance, I'd love to resume my Guardian ad Litem duties, but with South Carolina a hotspot of infection, now is definitely not the time for that. I've had to (regretfully) let that go by the wayside. Although I love and believe in the work, a 9-5 office job doesn't lend itself to regular family court appearances. Nor did it give me a good time to meet with childrens' school teachers and counselors, which is an essential part of serving as a GAL. I think I may have to put off that kind of volunteer work until I'm retired, not merely staying home because of a virus. It's too bad, though. I could do a lot of good with all the time I have to spare these days.

It definitely looks like I'll be going back to work soon, though. Governor McMaster gave a press conference today where he basically said he wants the schools to reopen for in-person instruction after Labor Day no matter what. Teachers and parents are frightened and angry, which I understand. As for me, I'll do whatever I'm asked to do. Maybe by then our city's new mask requirement will help to tamp down the infection rate. In any event, I'll be sitting behind a counter and behind a desk (several feet away from others) in the office, wearing a mask, and being vigilant about hand washing. I'd be lying if I said I was upset about the prospect of going back, though. I need that sense of  purpose in my days.

How do you retain a sense of purpose and balance in these strange times? Does your work/contribution to society have an effect on your feelings of self worth? I'm finding that a sense of purpose in life is important to me (I never knew this about myself). Is this true for you, too?