The other day Meike mentioned the use of the term "high summer" in Germany  to describe this period from mid-July to mid-August, when temperatures are at their highest. I love the sound of "high summer" and think it perfectly describes this time of year.

South Carolina is currently smack in the middle of the first big heat wave for this summer. Temperatures have been reaching around 98F degrees (36.666C, and no, I didn't make up the ".666" part!) with high humidity to go along with it. We've been having weather (heat) advisories every day, and going outside is almost out of the question. It's like walking into a blast furnace when the sun is out, and at night it's like a sauna, with air so thick and hot it's like having a damp blanket over your head. After a sweltering hot afternoon yesterday, we had a brief  but heavy rain shower. When it was over, you could see steam rising off the streets for the next couple of hours. Yuck.

Getting exercise (for me and the dogs) has suffered. We take the dogs out most nights for a short walk after dark, but it's still so hot that we're lucky if we make it around the full half mile loop of the neighborhood just once. Not only is it extremely uncomfortable for me, but Ginger has a thick coat and is 13 years old. We have to be more careful with her these days, and this heat is no joke. We all need more activity, but I'm not sure how to manage it! In a normal year I'd go and walk with friends at the (air conditioned) mall sometimes if it was too hot to do it outside, but of course that's not a good idea with the coronavirus still raging. In a normal year, I might at least go downtown occasionally, to the library, to the thrift stores to browse, etc., but not this summer! Back in the spring, being at home got tedious sometimes, but at least the weather was nice and there was plenty to do outside. Now that I'm stuck literally in the house with this heat, I'm feeling kind of stir crazy. But summer in South Carolina always feels a little bit like that anyway.

Our Crepe Myrtle trees have been blooming their hearts out for us over the last few weeks! Last winter's careful pruning of the lower branches may have had something to do with it, or maybe it's the plentiful rain we've had this year, but in any case they sure have been pretty. 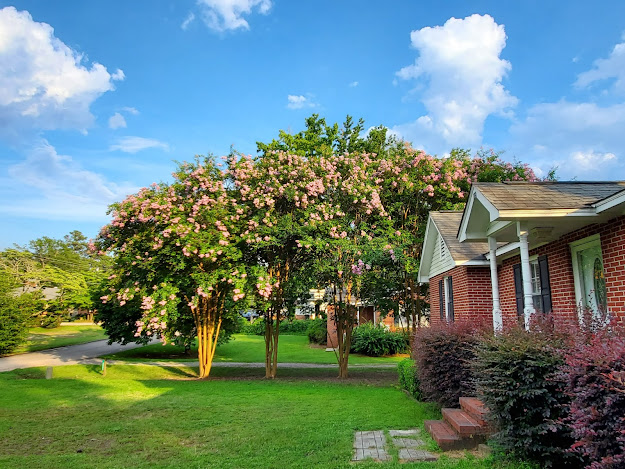 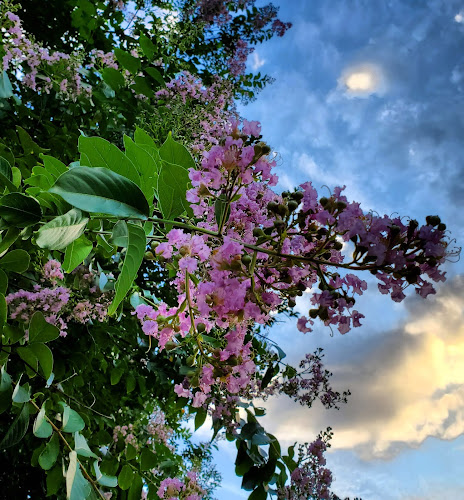 These photos were taken last week. Now that the temps have soared, we noticed yesterday that the flowers are beginning to look a little past their prime already. Everything that's green outside is starting to get that late summer slightly tired look. I doubt we'll see any real lessening of the heat for some weeks to come, though. Summer still has us in its grip!
Speaking of high summer, tomorrow happens to be the anniversary of the day I took a trip to the ocean with my friend Marla a few years back. I know I shared pictures from the trip, but I don't think I ever told the story of how we almost died in a state park that day. I think I'll use that for a post tomorrow! It was a memorable experience, that's for sure.
In the meantime, stay cool my friends.
Posted by Jennifer at 2:05 PM