Marla and Martina came over for a masked visit Monday night. Masked, because it's far too hot to even think of sitting outside on the porch to maintain distance. Have you heard of "maskne"? Getting acne on your face underneath where a mask goes? That's happening to me. Even sitting inside in the air conditioned house, I'll sweat under a mask and yesterday morning I woke up with a painful zit on my chin. A small price to pay to get to safely socialize for a couple of hours.

It was great to see them both, but I couldn't entirely shake the despondency that I've been feeling for the last while. At times like these I'm glad that I'm taking a low maintenance dose of an antidepressant. I can feel the darkness of anxiety and depression lurking around the edges of my consciousness. A whole variety of stressors are contributing to it, I think, many of which everyone reading is likely experiencing to some degree these days.
I made a couple of pizzas (which didn't turn out well at all....the pepperoni tasted funny and I burned the crusts a little bit) and also some cupcakes from a box mix that had been sitting in the back of the pantry since the lockdown began in March. Martina had just had a birthday, hence the cupcakes. Marla brought over a case of hard ciders to share.  It's weird sitting with friends and everyone wearing a mask. I sometimes wonder if life will ever get back to normal.
Oh, and Marla's parents and grandma sent us a huge bag of homegrown tomatoes from their garden! I made BLTs with some of them last night, and they're the most delicious tomatoes we've had this year. 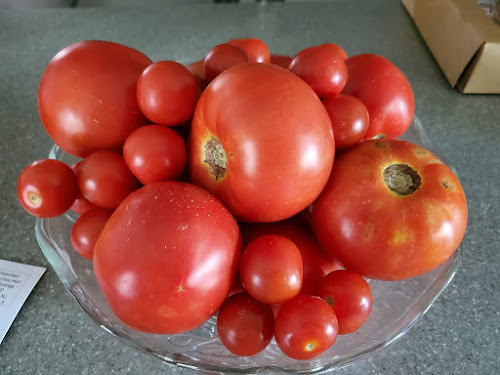 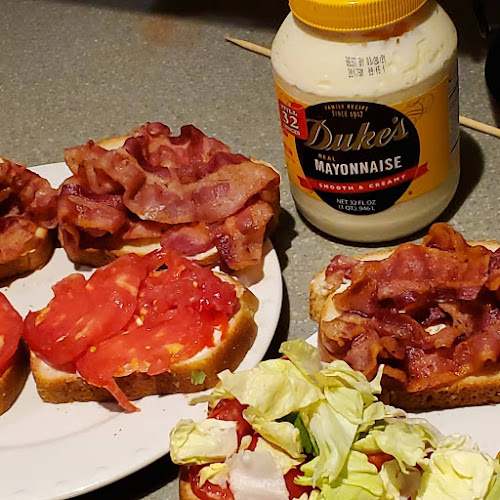 I've done some reading lately, but most of it's been re-reading favorites. The exception was a $1.99 e-book I downloaded of Shirley Jackson short stories. I really liked The Haunting of Hill House and We Have Always Lived in the Castle, and all the stories have the same kind of creepy/unsettling vibe. Fun summer reading.
We've also been watching the HBO documentary I'll Be Gone in the Dark, about the crime blogger and writer Michelle McNamara's search for the Golden State Killer. The GSK was a notorious serial killer and rapist who terrorized parts of California in the '70s and early '80s and the case had long gone cold. Thanks to the attention her work reignited, they actually caught the guy a couple of years ago. The FBI was able to track him down by searching ancestry databanks from companies like 23 and Me for distant relatives of his who shared some of his DNA. After all these decades, the monster is finally in prison where he belongs, and the story of the search for him has been fascinating. The documentary is also about McNamara, who unfortunately passed away suddenly the year before and didn't get to see the killer get caught. That's a shame. I'm not normally a person who enjoys true crime type shows or podcasts, but I've been enjoying this one and can highly recommend it.
Besides reading and watching tv, I haven't been doing anything much worth mentioning. The heat and humidity have been terrible. Going outside just isn't fun. I'm tired of being so homebound. Except for the grocery store, I rarely go anywhere unless I have to make a trip to the drugstore or to put gas in the car. When I run one of these errands I usually drive around town a little while I'm out, just to get a break from being at home. When I think of how badly I've needed and wanted time off in the past when I was working a lot and life was normal, I feel guilty about not enjoying all this free time. Still, it's just been too much. If I could do more normal things like visit friends, go to book club (it looks like we won't be resuming that at all this year), go to the library or the thrift stores to browse, then things would be different. In this city and this state, coronavirus is running rampant and doing any of those things would be risky. It's bad enough worrying about going back to school in another month. Just yesterday our local news reported that a neighboring school district (Darlington) had 6 cafeteria workers test positive for the virus. They were working at the schools' summer feeding programs for the community. Now all the school cafeterias are closed down for disinfecting and the workers are in quarantine. And that's just when they're making summer lunches for some of the kids! Who knows how bad things will get once we reopen. As much as I want to go back to work, I'm dreading what the fallout may be. Gregg wears a mask all day long at the pet store or when he's servicing aquariums, sometimes for up to 10 hours a day, and still he's worried because our numbers are so bad and so many people continue to refuse to honor the mask requirement. He's wishing now he had gone to work at first when the virus numbers were still low, and could take some time off now that things are so much riskier. If things continue to go downhill he might have to anyway.
All in all, it hasn't exactly been a stellar summer, has it?
Posted by Jennifer at 3:07 PM