Things that thrill my middle-aged heart

A few weeks ago, I was bemoaning the fact that it was going to be too expensive to fill the raised garden beds I'd built in the backyard last fall. After days of googling local landscaping supply businesses and their prices for compost and topsoil, I came to the sad conclusion that I was going to have to be content with dismantling the beds and planting my garden in the ground, instead. And since we built the beds out of heavy sections of border stones, moving them was going to be hard work, to boot.  I was so disappointed!

I mentioned all this to a science teacher friend at work last week. Longtime readers may recall me mentioning her here in the past: she's a certified beekeeper who wrote a grant that got our school a working apiary as well as the head of our 4-H club. At home, she's a keen gardener and chicken keeper who's sold me lots of good eggs over the years. When I told her of my disappointment that I couldn't afford to fill my raised beds, she looked at me incredulously.

"Haven't I told you about the big pile of compost and topsoil they want me and my 4-H students to get rid of? They think it's an eyesore on the side of the campus."

Well, I had heard her mention it, but never considered it had anything to do with me. She teaches two Intro to Agriculture classes as well as running the 4-H club, and last year she had picked up several truckloads of good soil for student projects. It's a big mound. They've filled raised beds, boxes, and planters from it, and there's still a lot left. The district head of maintenance (he's kind of a jerk) told her flat out, "Get rid of that dirt pile or the landscapers will come do it for you!" and so she's been scrambling to find ways to use it up. You see where I'm going with this......

As if that wasn't enough good fortune, the day after we had the conversation, she took one of her Ag classes outside, armed with shovels. Her eyes twinkled when they walked past my desk. "My class is going outside for the rest of this period. Call my cell if you need one of the students." "Okay" I replied. They go outside pretty regularly so I thought nothing of it.

Thirty minutes later the students came tramping back in, and Ms. Howard was grinning. "We just filled the back of my truck with a load of dirt. Text me your address, and I'll swing by this afternoon and deliver it!" I was so surprised! Then when she delivered it, she had her husband and teenage son follow her over, and they quickly shoveled it all onto a tarp I laid down beside the fence. 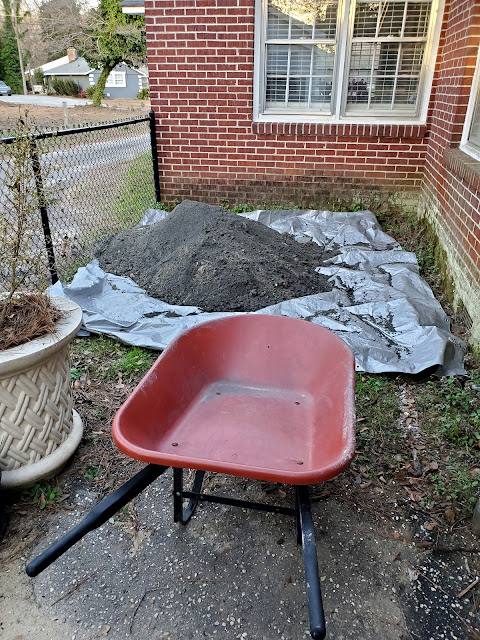 This was just the first load. Yesterday she had me drive our truck to work and park by the pile, and once again she took a class of students outside to fill it. Since Gregg had the day off, he came and switched vehicles with me and took the second load home, so the pile is bigger now. Two or three more loads next week should fill my beds nicely.

And it isn't costing me a dime!!! I'm beyond thrilled....about dirt. Hahaha!

I'm planning to do something for Ms. Howard to show her appreciation for her kindness and generosity. And I may have to make cupcakes for her 1st period Agriculture class, who have done so much work to help out. So far I haven't lifted a shovel even once!