I got a text yesterday afternoon from one of my neighbors letting me know that several cars in our neighborhood had been broken into the night before. Some items had been stolen, too.

As soon as I got home from work I texted more  neighbors (the two on either side of us) alerting them to the situation. One is an 80 year old widow and the other is a middle aged single woman who does pet sitting/shelter dog fostering out of her home.

Both women were alarmed since they live alone, but we all agreed to look out for each other and to be alert to any suspicious activity.

Heather, the dog foster lady, texted me later in the evening to tell me she was still pretty nervous. She sent along a picture of a note she taped to her car's driver side window. We had a good chuckle over it. 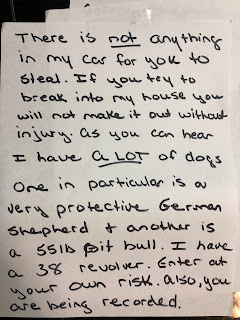