One reason that I decided to miss last Wednesday's book club meeting was because I had a very small, very careful social gathering planned at my house Saturday night. Doing both would have seemed like too much socializing in one week during a pandemic. Marla and Martina came over for food and drinks to celebrate Marla's birthday (which was actually Monday). Since it was a birthday celebration, I made a lot of food, all of our particular favorites: ham and cream cheese pinwheels, grape jelly meatballs, crudites with sour cream dip, and for sweets I made two desserts: a pumpkin spice bundt cake and double fudge brownies. And of course, there was plenty of wine. Not only did I have a couple of bottles, but Martina brought two more to share and Marla brought hard apple cider. We had a really good time. 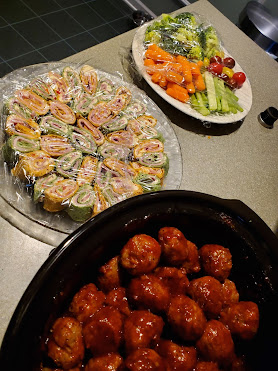 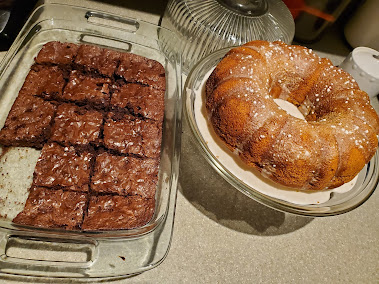 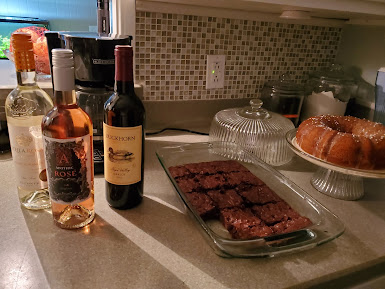 I'm very lucky to have such good friends in my life that I can count on. Especially considering what my blood relatives are like!

My mother reached out to me the other day via text, said some slightly rude things to me, and when I eventually responded with a carefully thought out text setting some boundaries necessary for us to have a relationship going forward, she went absolutely berserk and said some truly cruel, heartless things to me. Included in her rantings were things like: she didn't ever want to see or hear from me again, she and dad would be seeing a lawyer to change their will to make sure I don't get anything of theirs when they die, I'm hateful and ungrateful and will end up alone in the world, and more stuff in that same vein. I didn't respond. Then the next afternoon she sent me another text, saying something to the effect of: I'm sorry sweetie, I said some uncalled-for things to you, I think I'm losing my mind, I don't start off thinking crazy thoughts but somewhere things go wrong, I love you and Gregg, blah blah, blah, blah. I'm beginning to think she's got some serious loose screws upstairs. I don't know what's happened to make her and my dad go totally off the rails like they have, but I've washed my hands of it all. I'm not interested in continuing to interact with them for the foreseeable future. They obviously need counseling at the very least, and until they deal with whatever is causing them to act like this, I plan to keep my distance. If it becomes necessary, I'll block their number, too. I probably should have done so already.

Enough about that, though. I had a great time with my friends the other night. Gregg and I have been taking long walks both early in the morning and again after supper with George every day. That's always a joy. Last night we saw a large deer standing at the edge of a neighbor's driveway, just calmly watching us before ambling off into the woods. It was a large buck with big white antlers and seeing him was almost magical. We hear the Barred Owls calling at all hours after the sun goes down, and sometimes we catch a glimpse of one of them swooping silently between perches when we take our evening walk. Our neighborhood and house continue to be a source of happiness for us both! George is finally adjusting to being an "only child" and his behavior is improving from all the extra attention he gets these days. Marco is doing great. Here's a picture I just took of him a second ago as I typed this blog post. 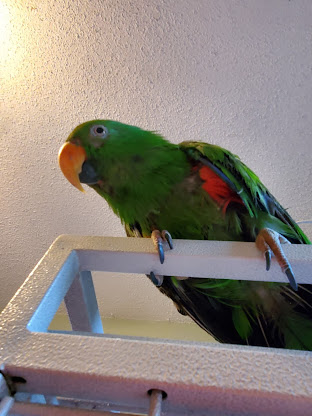 He's as bold and sassy as ever!
And Halloween is coming! Tomorrow is the day I go to see little P and his mom after work, and we're going to carve pumpkins! He's going to be so excited. His mom hasn't told him yet that I'm coming. She said he's going to be thrilled both because I'm coming over and because he's been bugging her for weeks to let him try to carve a pumpkin. I'll be picking up a pizza on the way over, too. It's going to be a fun time!
I will, of course, post pictures of the finished works of art tomorrow night. :)
What are you up to this week? Are you doing anything for Halloween? I'd love to hear about it if you are!
Posted by Jennifer at 6:10 PM