I had big plans for being politically active this election season. Then the pandemic hit.

I'm a member of a local political action group and have been since 2016, but this year I haven't attended a single meeting or event. Several of my close friends are members of other groups--the League of Women Voters, the local Democratic Party, etc. They're all very politically active and I admire the amount of work they put into the issues near to their hearts. I had hoped that this would be a busy fall for me with the election looming, but with Covid hanging over our heads I just didn't feel comfortable having too much contact with the public (such as working at voter registration drives). Nor has there been any extra money to contribute to campaigns this year. And with all the civil unrest and violence these days my husband is dead set against me attending any marches or rallies. He's afraid something might happen to me and I respect that. Still, I felt guilty about sitting around doing nothing when things are so bad.

But then my friend Karen asked me for help with something I could do--help her address and send out postcards to registered voters in South Carolina for the Jaime Harrison campaign. He's running a surprisingly tight race to unseat our loathsome Senator Lindsey Graham. Karen was willing to have the postcards made and to pay for the postage, but she had hundreds of them to do and was overwhelmed with the work of addressing them all. So our friend Marian and I both volunteered to help her out. I've been working on them for the past two afternoons, adding a quick, personal, and positive note to each and every one of them: 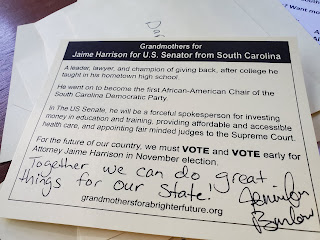 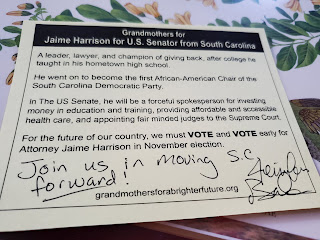 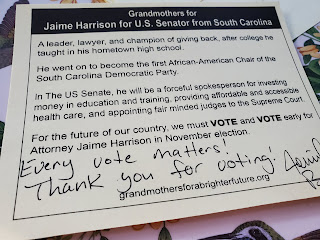 It's not much, but it's better than nothing at all.