For a couple of years now I've occasionally shared an essay by the late naturalist writer Hal Borland here on the blog. Yesterday I got a comment from Neil (Yorkshire Pudding) asking me if there was any evidence that Borland was strongly religious as he had such a feeling for Nature and the passing of the seasons. I had never considered the question and my first impulse was to say no, that he was not, but I decided to do a little internet research to see. I didn't recall ever seeing any mention of religion in his writings.

Here's the quick Wikipedia summary of his life and work:

Harold "Hal" Glen Borland (May 14, 1900 – February 22, 1978) was an American author, journalist and naturalist. In addition to writing many non-fiction and fiction books about the outdoors, he was a staff writer and editorialist for The New York Times.

Borland was born on the plains in Sterling, Nebraska, to Sarah M (née Clinaburg) and William Arthur Borland. When Hal was 10, the family moved 30 miles south of Brush, Colorado, where his father staked out a homesteader's claim on the prairie. Hal later detailed his experience on the homestead in his book "High, Wide, and Lonesome." After proving out on the homestead claim, his father sold the homestead and bought a weekly newspaper in Flagler, Colorado, where Hal finished his school years. This experience is detailed in his book "Country Editor's Boy." After attending local schools, he studied at the University of Colorado from 1918-1920, majoring in engineering. While there, he held jobs at the Denver Post and the Flagler News. It was during this time he realized his true calling was as an author, and he soon moved to New York where he studied journalism and graduated from Columbia University in 1923 with a Bachelor of Arts degree in Literature.

Borland started writing as a journalist for publications such as The Denver Post and the Flagler News. While attending Columbia University he wrote for the Brooklyn Times, the United Press, and King Features Service. After graduation Borland worked for a variety of newspapers across the United States, eventually settling in Philadelphia and working for Curtis Newspapers, the Philadelphia Morning Sun, and the Philadelphia Morning Ledger from 1926 until 1937.

In 1937 Borland began writing for The New York Times, first as a staff writer for The New York Times Sunday Magazine (1937-1943) and then in 1942 as an editorial writer for The New York Sunday Times, a position he held until his death in 1978. While at The Times, Borland began writing about his experience as an outdoorsman in a series of editorials that were later compiled into two books. He wrote similar pieces for the Berkshire Eagle (1958-1978), Pittsburgh Press (1966-1978), and Torrington Register (1971-1978).

Borland also wrote short stories, poetry, novels (including westerns under the pseudonym Ward West), biographical novels, non-fiction, articles for a variety of magazines, and one play.

In 1952, Borland and wife Barbara moved to a 100-acre farm in Connecticut, where they lived and worked until his death in 1978 at the age of 77 from emphysema. 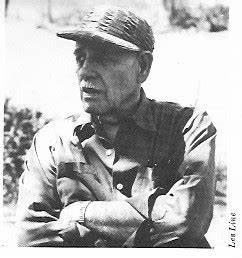 Here's something about his career he wrote for a brief biography in World Authors, 1950-1970.
"Early engineering training taught me to respect facts and logic. Newspaper years taught me to write straight sentences and build logical paragraphs, and fostered my work habits. A bent toward poetry gave me a sense of words and language that helped shape my style."
Here are a couple of excerpts from his obituary published in the New York Times in February, 1978.

Hal Borland, writer and naturalist, died late Wednesday at Sharon (Conn.) Hospital after a long illness from emphysema. He was 77 years old.

Author of 30 books and hundreds of articles and columns, Mr. Borland was celebrated as the writer of editorials in The New York Times that have chronicled the seasons for 35 years. The final two of 1,750 appeared Tuesday, the day before his death, and on Feb, 13....

The editorials were unsigned, but their authorship was no secret. A typical Borland, as they were called in the trade, would greet the arrival of spring in the still snow‐dappled Berkshires:

“The violets will come, in their own time. That is all that was written in the sky by Friday's equinox. The sun's summons will not be answered overnight, but the answer is inevitable. The first hungry bee at the first crocus hums of June, and the first green leaf forecast cool summer shade. All is in order. Spring is the earth's commitment to the year.”

‘The Voices of Frogs’

On the wall of his study in the farmhouse near Salisbury, Conn., hung a New Yorker cartoon showing a man angrily waving a copy of The Times and telling his wife: “Here's another of those crackpot editorials about the voices of frogs shattering the autumn stillness!”

Actually, Mr. Borland’ was a conservative and a conservationist who decried “sentimental or anthropomorphic drivel” in nature writing, Thus, he said, when wildlife appears to stocking up more than normally in the fall, it does not mean that it knows a lean winter is ahead, but a lush summer is behind...

In his gentle style, Mr. Borland appealed to gardeners and farmers to restrain the use of pesticides and save the birds—not, he said, for their song but for man's safety. “As far as I am concerned,” he said, “I am fighting for life, and a brown thrasher may eat up to 6,000 insects a day.”

Mr. Borland frequently wrote about the West, and recalled his boyhood years in a memoir, “High, Wide and Lonesome. In returning on a visit, he decried the encroachments of superhighways, and throwaway cans. His own refuge in the Berkshires was far from there, but he once described it as “the perfect world—a home at the end of nowhere.”

“This is the only way to live,” he said, “'waiting for the vernal equinox, seeing an apple tree blossom or coming on an old coon and her kits fishing for clams late at night.”

To protect his privacy, his mailbox bore no name. But nature lovers, among them Justice William O. Douglas, found their way there, and were welcomed warmly. Mr. Borland won the John Burroughs Medal, considered the country's highest award for nature writing, in 1968. Two of his books, “Sundial of the Seasons” (1964) and “An American Year” (1973), are collections of his editorials. His latest books were “A Place to Begin: The New England Experience” (1976) and “The

Golden Circle” (1977), writings for children, arranged by months of the year.

To his biography in Who's Who in America, Mr. Borland recently added:

“I am a fortunate man. I grew up on a frontier, escaped early success, had things to say when I matured. I have been able to make a living at work I wanted to do, to write what I believed and find an audience. My purpose has been to write at least a few paragraphs that will be remembered after I am dead. I have enjoyed life. I still do.”

In all my looking, I've seen no evidence of religion playing a huge role in Borland's life. To me, his writings speak of a great love for the natural world and the eternal cycle of the seasons. I first discovered his work among the dim, dusty shelves of a small town library probably twenty years ago. I was wandering around, pulling out old volumes at random and perusing them whenever a title looked interesting, and was immediately charmed with the 366 essays (one for each day of the year) in Hal Borland's Book of Days. They also had a copy of a compilation of his work published by his wife after his death, Twelve Moons of the Year. Both of these books have been recently been published again after being out of print for decades, and as a matter of fact I ordered a copy of Book of Days this morning! The essays I share here are from a Hal Borland fan page on Facebook.

I'll wrap up this post with some well-known Hal Borland quotes. Enjoy!

* “Knowing trees, I understand the meaning of patience. Knowing grass, I can appreciate persistence.”

* “Summer ends, and Autumn comes, and he who would have it otherwise would have high tide always and a full moon every night.”

* “In a painful time of my life I went often to a wooded hillside where May apples grew by the hundreds, and I thought the sourness of their fruit had a symbolism for me. Instead, I was to find both love and happiness soon thereafter. So to me [the May apple] is the mandrake, the love symbol, of the old dealers in plant restoratives.”

* Trees are the oldest living things we know. Rooted in the earth and reaching for the stars, they partake of immortality.

* Life persists, and so does its ultimate source, call it what you will. Man is a unique form of that life, but not alien to it. He happens to live in the midst of life on this earth, this particular small unit of a universe about which he actually has only a smattering of knowledge.

* Consider the wheelbarrow. It may lack the grace of an airplane, the speed of an automobile, the initial capacity of a freight car, but its humble wheel marked out the path of what civilization we still have.

* The earth's distances invite the eye. And as the eye reaches, so must the mind stretch to meet these new horizons. I challenge anyone to stand with autumn on a hilltop and fail to see a new expanse not only around him, but in him, too.

* Man is wise and constantly in quest of more wisdom but the ultimate wisdom, which deals with beginnings, remains locked in a seed. There it lies, the simplest fact of the universe and at the same time the one which calls forth faith rather than reason.

* Summer is a promissory note signed in June, its long days spent and gone before you know it, and due to be repaid next January.