GB and I had a great time on our anniversary earlier this month. We visited the Natural Bridge, in VA, which was truly massive. Pictures don't really do it justice, but I will post one anyway. 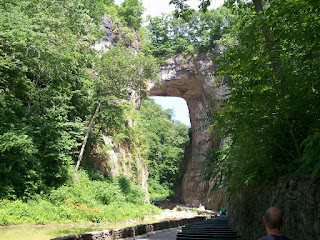 The hotel we stayed in was kind of old, but the room was nice and it had a great view. 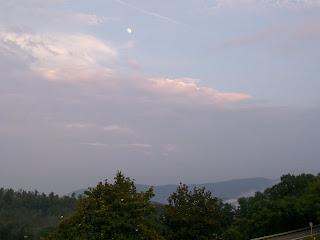 This was the view from the balcony of our room.

We also got to take a tour of the deepest caverns on the east coast. This next picture was taken 340 feet below the surface of the earth. Freaky! 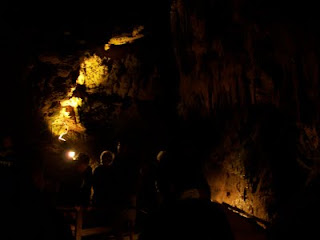 All in all, it was a great trip. We really enjoyed getting away from it all, and celebrating 5 happy years of marriage!
Posted by Jennifer at 2:19 PM No comments:

Email ThisBlogThis!Share to TwitterShare to FacebookShare to Pinterest
Labels: anniversary, the Natural bridge

Take me to the bridge.

"but soon the fore part of him slowly rose from the water; for an instant his whole marbelized body formed a high arch, like Virginia's Natural Bridge, and warningly waving his bannered flukes in the air,the grand god revealed himself, sounded, and went out of sight."
-Herman Melville,
Moby Dick

With our 5th wedding anniversary approaching, we wanted to go somewhere interesting. We decided on the Natural Bridge in VA for our vacation this year. We will be exploring paths around the bridge (with classical music and staged lighting at night, as seen above)and the deep caverns around it. There is a newly opened butterfly greenhouse that I am excited about seeing, and our hotel room will have a small private balcony facing the mountains.

They say George Washington surveyed the land and his initials are carved in the limestone of the bridge. Thomas Jefferson owned the property for awhile at one point, adding to it's historical interest. There is a "Native American Life" trail, too, but GB and I will probably skip that part. I do want to see the dinosaur park...they say there are huge models of dinasaurs romping around with statues of "settlers". That seems too corny to miss!
What really excites my deep inner book nerd is the quote from Moby Dick, though! How cool is that?

I will be posting pictures after our anniversary festivities are over. I can't wait to get away and have a little fun with my favorite guy!
Posted by Jennifer at 9:43 AM No comments: