I'm joining in the monthly book discussion over at The Cephalopod Coffeehouse and sharing a review of my favorite read for the month of July.

The best book I read this month, and probably so far this year, was All the Light We Cannot See by Anthony Doerr.

This is the story of a young blind girl named Marie-Laure LeBlanc and a German orphan named Werner that takes place during WW2. Marie-Laure is the daughter of a locksmith and curator from the Paris museum of natural history, and she and her father have fled to the walled city of St Malo, which is occupied by German forces, to wait out the war with her reclusive great-uncle, an emotionally fragile veteran of WW1. Marie's father builds her small models of all the buildings and houses of San Malo, and then teaches her to navigate the city streets so that she can have a measure of independence.

Werner and his little sister, Jutta, are living in an orphanage at the beginning of the book. Their father was killed in a coal mining accident, and all the boys in that area expect to grow up and work in the mines. Werner is small for his age and somewhat frail, but he's brilliant and has a special aptitude for working with radios and transmitters. When a German officer who lives nearby hears of his ability to repair radios, he sends for him to fix one. He's so impressed with the boy's work that he gives Werner a recommendation to go a Nazi military training school. Werner is totally unsuitable for military training, and the school is full of horrors, but his brilliance and aptitude for engineering is recognized immediately and developed for the Third Reich's war machine.

Each chapter is short and switches between the point of view of Marie, Werner, and a German officer who's obsessed with finding a valuable jewel that has been smuggled out if the Paris museum along with other national treasures to keep them safe from the Germans. Marie's father and two other men all left Paris with jewels....one real and two fakes, and no one knows who got the real one.  The officer is slowly hunting down the real one, which Marie's father has.

It's quickly apparent that Werner and Marie-Laure are destined to cross paths. Their stories are told with such poignancy that it will break your heart. The writing is beautiful, but the plot is quite sad. As in real life, there are very few happily ever afters during wartime.

Normally when I think of WW2 I think of the suffering of the Jewish people and of the horrors they had to endure, but until I read this book I never considered how terrible the war was for other people, too. The boys forced to fight for the Nazis, the townspeople in San Malo, the allied soldiers, even ordinary German citizens just trying to survive during wartime.....what a terrible, terrible thing war is. What a waste.

This book will stay with me for a long, long time. The beautiful, heartbreaking humanity of it makes it worthy of the Pulitzer prize it received. 5 stars.
Posted by Jennifer at 5:19 PM 10 comments:

Email ThisBlogThis!Share to TwitterShare to FacebookShare to Pinterest
Labels: All the Light We Cannot See, book reviews, The Cephalopod Coffeehouse

Glory in the morning

This is how I know when summer is starting to wind down, no matter how hot it still is or will be in the next few weeks. 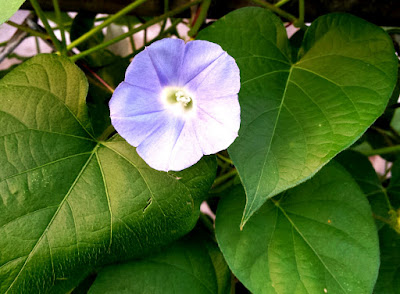 The morning glory vines are spreading like mad over the back fence, and the first blooms are opening at daybreak. I took this picture at 7am this morning as I was leaving for work. I associate morning glory flowers with late summer and early autumn. By the first of September the roadside ditches will be filled with masses of blue and purple flowers.

Well, it's almost the end of July and my quest for a new job continues. I'm currently trying my hardest to get one of two open positions with a neighboring county's school district. I have a friend who teaches at the middle school there who has been doing her best to help me. A position at her school has opened up for a Student Data Manager, and a position at the district office has opened for a Secretary of Communications. She's been emailing and texting the principal at her school about me (school is out for the summer otherwise she'd talk to him in person) and she's writing a letter of recommendation for me for both jobs. It's so nice of her to go to all the trouble, and even though it pays much less, I think I'd prefer the position at her school to the one at the district office. If I get it my office will be two doors down from her classroom, and it will be nice to have a friendly face nearby!

Applying for these positions has been a real pain. The district requires you to jump through several hoops to apply for any position. I've had to:

*take a typing test at our local unemployment office and fax the results in (I discovered I'm able to type 58 wpm with 100% accuracy!)

*fax in copies of my social security card and driver's license (so they can do a background screening and make sure I'm not a pedophile.)

*print out three copies of a professional reference form, sign off on them that I waive my right to review what my references say about me, and deliver them to said references for filling out and mailing in.

That's quite a list, isn't it? That's why I've been too busy to blog much this month. Between doing all that, and continuing to look through other job openings, and **meeting with the two book clubs I've recently joined, I've had very little time to sit down and write. I hope all this hard work pays off soon with a new job!

**I've read a whole lot of great books recently. One of these days soon I'm going to write some reviews of the best ones. And I can't wait to tell you all about the two books clubs I'm in. They're so much fun!
Posted by Jennifer at 11:06 AM 6 comments:

Here's my gigantic pit bull mix George engaged in one of his favorite weirdo things to do. 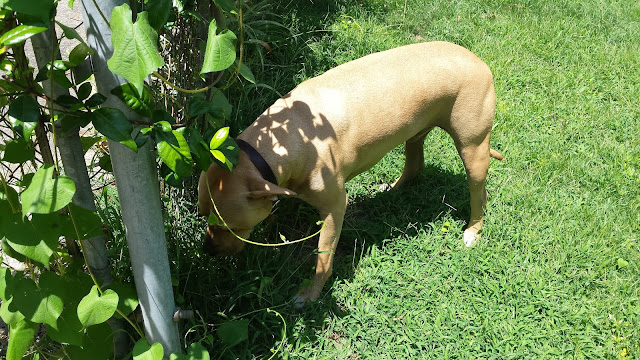 I think sometimes George must be part goat. He'll chew on and eat any any nasty old thing thing he happens to find, including but not limited to super ripe roadkill baking in the summer sun, so I have no doubt whatever he sometimes gives himself a slight bellyache. That's probably how he came to love munching on fresh grass so much. It's one of his favorite snacks.

There's almost nothing higher on my list of favorite things than a good long nap on a hot afternoon.

I love to lower the a/c until the house has a slight chill, draw the blinds to block out the fiery beams of the daystar, and settle down under a light cotton throw with my favorite pillow and a book. Before long, it's off to dreamland for an hour or two.

My husband almost never naps, and when he does it's usually only for 30 minutes or so. He says he hates "to waste the day" which I don't understand. A nap, to my way of thinking, is as good a way as any to spend the day. Especially when it's too darn hot to even consider being outdoors!

Our a/c is working again, at least for the moment.

One day last week, a police officer friend of my husband's told him how the number of murders and shootings in the area always goes up sharply during a heat wave. People get irritated easily when it's so hot and sometimes even little things send them right over the edge! He said they've had their hands full this summer.

Having just spent a night and a day suffering in the heat, I can appreciate just how frayed a person's nerves can become after a while!

How much longer until autumn?

I finally have a weekend off and am I happy? No, I am not.

I'm irritated and quite frankly fed up!

Our a/c has quit working for the second time in a week. On a weekend, yet again. And it's f*cking hot...today's temps are expected to reach 100°F. Last night, after a long stressful day at work, I arrived home with a splitting headache only to discover that the house was 80 degrees and rising. My husband hadn't even noticed (!). So I've had almost no sleep and my headache is still pounding away this morning and it's 85° in this house. The landlord is trying to get in touch with the repair guy. I wonder what the chances are he'll come out on a Saturday?

I was supposed to go visit my parents today. I haven't seen them since March. Thanks to my crappy job where I never get a fair deal on the schedule, I had to work on Mother's Day, Father's Day, and my mom's birthday. I only got a weekend off because I requested it two months ago, and now I can't go see them because I have to wait around for the repair guy (who may or may not show up).

This house we're renting is old and in increasingly poor shape. There are a list of things that need fixing as long as my arm. I'm ready to get out of here! Especially right now, when I'm ridiculously irritated. There's nothing like hot weather to shorten my (normally long) fuse!
Posted by Jennifer at 10:18 AM 5 comments:

They're finally ready......hanging in beautiful blue bunches, waiting to be picked.....blueberries! 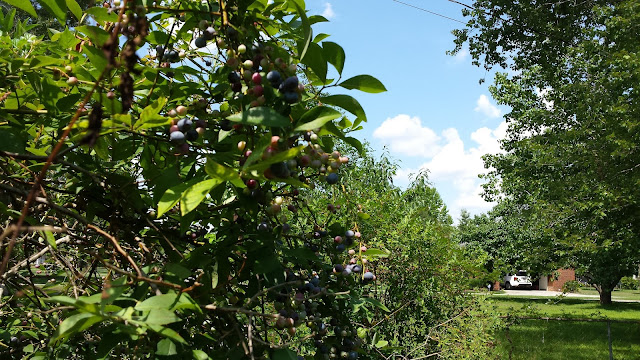 I had two little helpers, but they mostly wanted to goof off. 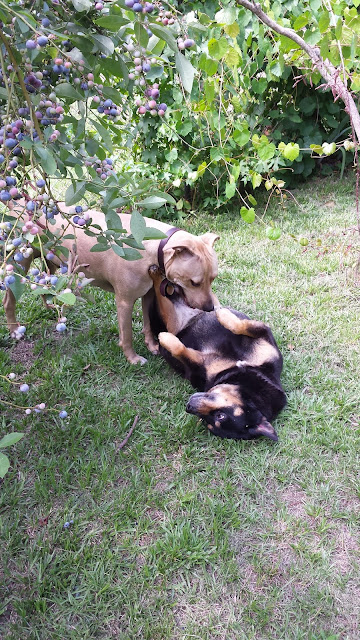 We're so lucky to be renting a house that had several mature blueberry bushes when we moved in. Every year we get loads of berries and we put forth zero effort to maintain the bushes. When we find a house to buy, it has to have enough land for a garden and several fruit trees...and some blueberry bushes. I picked 6 cups of berries today in 30 minutes or so. 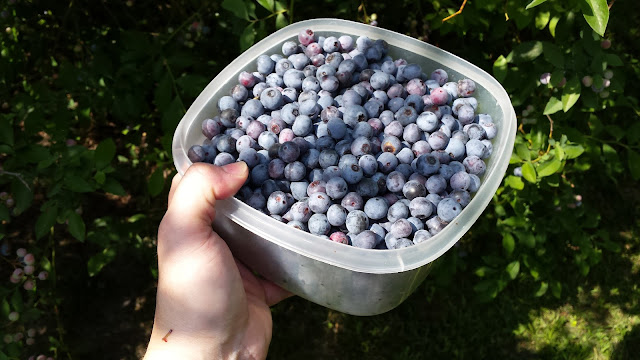 Tonight after dinner, this is what I did with 5 cups of them. 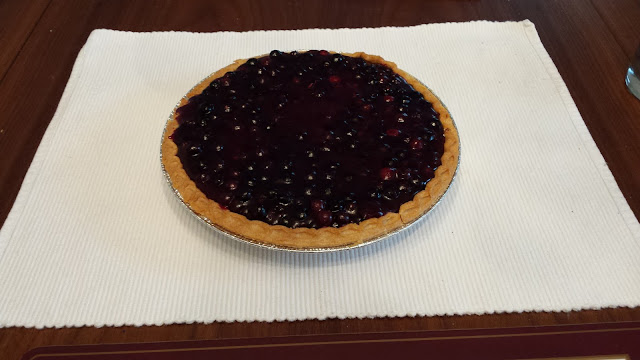 And later, after our evening walk, a slice of warm pie with a scoop of vanilla ice cream is going to be the bomb!
Posted by Jennifer at 7:06 PM 4 comments: