I'm glad to see February coming to an end today. Without going into all the unpleasant details, I'll just say it hasn't been a very good few weeks around here. I'm hopeful March will be better--after all it's my birthday month! And spring should be arriving for real, and it's my very favorite time of year.

I've been full of ideas for topics to blog about lately, but have been hampered by my main computer dying a quick and rather dramatic death this week. (It was like a machine possessed-- blank screen, high pitched horrible incessant beeps, and it wouldn't shut off. It had to be unplugged to make it stop.) I'm forced to type this with my tablet, and the tiny pop up keyboard is totally unsatisfactory. We're shopping around for a good deal on a new desktop tower. Once it gets here I'm ready to breathe some new life into this slightly neglected old blog!

In the meantime, I wish everyone a good weekend and a sunny, warm, and beautiful beginning of March.
Posted by Jennifer at 11:44 AM 3 comments:

Valentine's Day has never been a big deal at my house. We usually pick up some chocolates or a card for each other, whatever is easy and convenient, but it's not expected or taken very seriously. This year, totally on impulse, I decided to buy my husband a cookie cake. I was at work early in the day, and while walking through the mall on my lunch break, a display of them in the cookie shop's case caught my eye. They were so cute!  Then I saw one that was perfect for my husband, since he's an aquarium keeper by profession. It had a drawing of a fish on it. The young guy waiting on me told me it would only take him about 10 minutes to decorate my cookie, so I was happy to wait. I paid up, and he stepped behind the counter to decorate my cookie for me.

Clearly, he's not the same employee who decorated the samples. 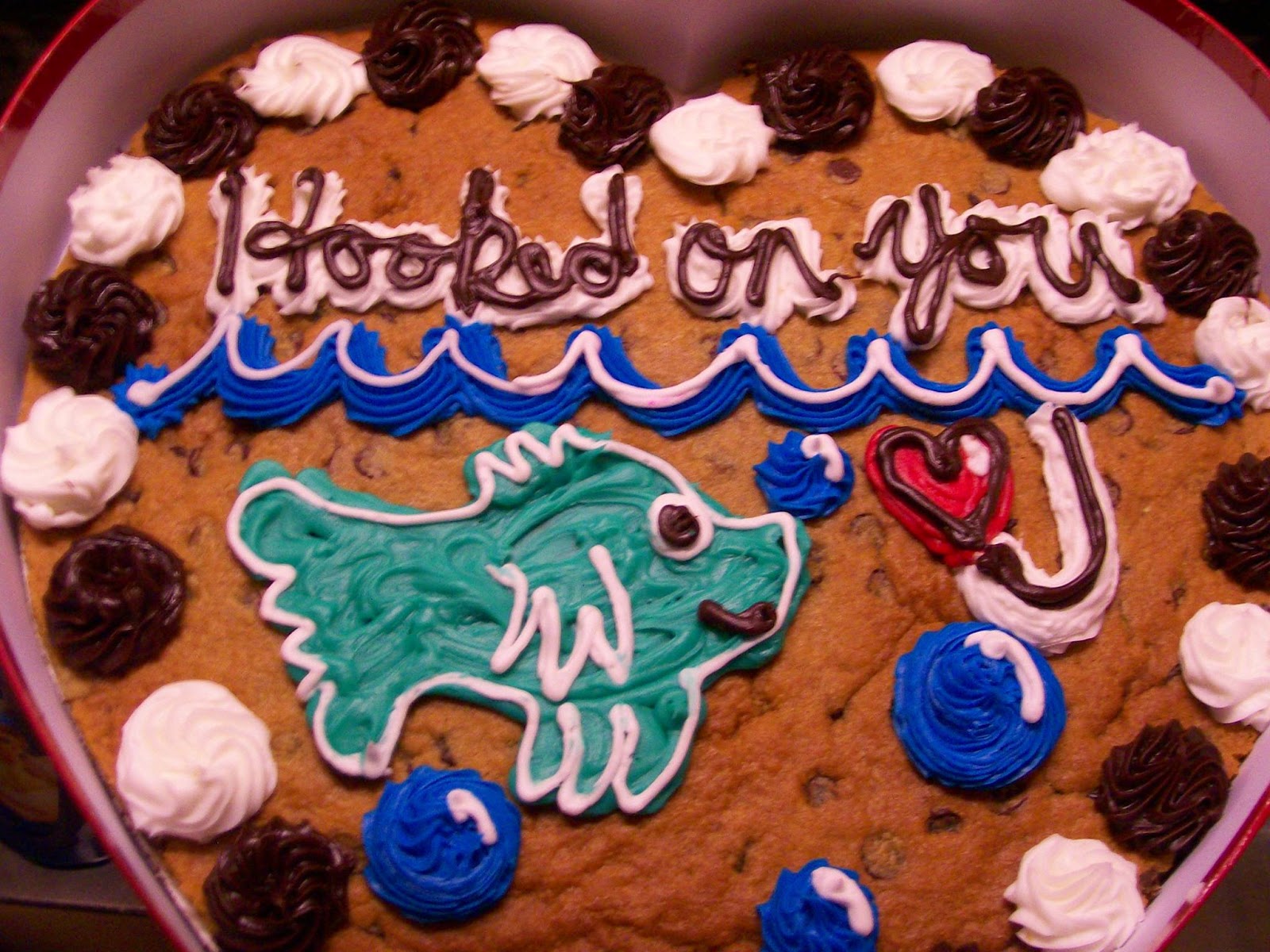 I didn't have the heart to tell the kid that his cake looked bad. And it turned out to be worth every penny I paid for it ($30, plus tax) when you count the laughs I had with it, first with my coworkers when I brought it back from my lunch break, then with my husband, then when I shared it on Facebook. I considered sending it to Cake Wrecks but it wasn't quite that bad, or that funny. But you have to admit: that's one strange looking fish!

(Also.....if you've never visited Cake Wrecks you owe it to yourself to go have a look. Funniest. Site. Ever. In fact, you might want to pee beforehand)
Posted by Jennifer at 5:10 PM 2 comments:

.....and yesterday I was the statue all day long!!

Some days just aren't meant to go your way, and I had one of them yesterday. I went to bed night before last with all sorts of plans to spend my day off being productive. Nope. Wasn't meant to be.

I woke up with a pounding sinus headache. I got up, took some medicine, and settled back in bed to catch a little nap, just until the pills kicked in. Ha ha! I slept until noon. Half my day was gone that quick! I hate it when that happens!

I got up, showered, and prepared to go have my car serviced (it's overdue for an oil change and tire rotation). I use the Toyota dealership because all service is free since my car is less than a year old. Lo and behold, they are doing renovations to the building where they work on cars and the line for service was about 10 cars deep. No thanks, I thought. I'll come back another day.

Since I was downtown already I decided to surprise my husband, and go to a new fancy car wash that just opened, and give my scion a good cleaning and vacuuming. He always complains that I should keep my car cleaner. Well. This car wash looks like something out of the space age. There were all these "hands free" docks and the entire place was laid out weird, on a corner of a busy intersection downtown. I pulled in, but then realized I was about to have to go through a pay station, and I had no idea how it was going to work....so I turned around and tried to get back out....to the chagrin of the drivers behind me, who started blaring their horns at me. Arrghh! I panicked a little, but after doing about a 20-point turn, managed to get over to the other side of the carwash......and still had no idea what to do. I saw all these slots where people where pulling their cars in, but I didn't see anyone actually washing their own. And there were attendants running around, and one kept trying to wave me through another pay station, and boy did he look annoyed at me! So I ended up doing another crazy turnaround, and getting the hell out of there! I felt like a total dumbass!

After that, I went home and washed my car the old fashioned way--with a bucket, a sponge, and a water hose. At least that one thing got done.

By this time, it was late afternoon, and I hadn't even touched any of the housework I had planned to get done. Then my husband got home, and discovered that our main (desktop) computer had died. It's making crazy beeping noises and the monitor is blank. I used the tablet that I'm typing this post on to go to the manufacturer's website, and we spent the next two hours trying to troubleshoot the problem. No good. I was so frustrated by then that I was ready to heave the whole machine out of the window!! And my husband, who had had an equally crappy day at work, was all tight-lipped and silent, a sure sign that he's pissed off and best left alone for awhile. So on my way to work today I'm dropping the computer off at a repair shop. If it can't be fixed I hope there will be some way to retrieve files....otherwise I'm going to lose about 5 years worth of photos. I KNEW I should have saved them elsewhere, but kept putting it off. Idiot.

So back to yesterday. . I gave up trying to be productive after that. I made a couple of sandwiches for dinner and we spent the rest of the evening watching Netflix. After a short walk with the dogs (during which George saw a cat and infuriated me by barking and snarling and pulling on the leash, the one problem we're still working on with him) we went to bed early. Some days that's all you can do--go to sleep and hope tomorrow is better!
Posted by Jennifer at 11:29 AM 2 comments:

Why Yes, I'll Have a Little Cheese With My Whine....

Reading back over my last post I realized how whiny I sounded . Oh, poor me, I had a bad night, boo freakin' hoo. It really wasn't as dramatic as all that. I managed to trudge through my day without feeling too terrible, and when I got home I took two Benydryl and slept for a few hours. I had thought of taking some in the middle of the night to stop the itching, but it was already so late that I knew I would have a hard time waking up for work if I did. They're a big help, but will definitely knock me out and make me groggy.

If anyone else suffers from eczema and allergies (I know Sarah mentioned having eczema) then you know how hellish it can be. I have spots on my knees, ankles, and lower legs that never go away completely no matter what I do. Lately a patch keeps appearing on my left wrist, too. Not only is the itch nearly unbearable, but those places get terribly sore and seem to ache all the way down to the bone. Some days I find myself limping because my ankles are the worst places. Sometimes the skin gets a little bit weepy, or else it dries out and cracks, and it looks terrible. I hesitate to wear sandals in public in the summer, or shorts if my knee patches are flaring up, because people will comment on it...."Oh my God! What happened?!" being the usual remark. It's embarrassing.

I need a referral to a good dermatologist and an allergy specialist. My allergies have progressed to the point that any contact with scented soaps or lotions will make me break out in hives and go into a sneezing fit. I'm also somehow allergic to my dog George. It's the weirdest thing; Ginger has never bothered me at all. I can pet her, kiss her, bathe her, and I'm not bothered at all. But any contact with George's saliva, even the tiniest lick, and big ugly hives break out on the exposed skin. He also makes me sneeze and my eyes water if I don't immediately change clothes after playing with him. How one dog can cause such a reaction when the other doesn't is a mystery to me. I knew I was severely allergic to cats, but thought I was home free with dogs. And allergies flaring up lead to eczema flares, as well. So finding an allergy specialist is something I need to quit putting off. I suspect that a regimen of allergy shots might be called for. It might even help with the eczema.

I saw a dermatologist years ago, but he wasn't very good and didn't seem to give a damn about my misery. He just prescribed the same old creams my GP always did. He spent a grand total of about 5 minutes with me and acted like I was imposing on his schedule when I tried to discuss different options. Steroid creams always work for a little while, and then slowly lose effectiveness. After depending on those creams for awhile, my skin becomes all the more easily irritated. I think I need a new approach, somehow. Eczema, psoriasis, and rheumatoid arthritis all run in my family. As they are all inflammatory diseases, I've been trying to do some things to lower my inflammation levels, like taking fish oil, reducing added sugar in my diet, losing weight (I lost 30 pounds last year, and still need to lose 30 more) and lots of water and walking. Hopefully if I can find a good new doctor(s) and start immunotherapy shots things will improve even more.

It would be really nice to wear shorts and sandals this summer, and to be able to play with George without nearly needing a breathing treatment afterwards! No more sleepless nights due to itching would be nice, too.
Posted by Jennifer at 12:26 PM 7 comments:

It never seems to fail; when I need to get up super early for work, no matter how early I go to bed, I will toss and turn miserably for most of the night. Nothing seems to help. I'm too used to staying up late, sleeping in, and working later in the day. Of course, worrying about needing to fall asleep makes it that much harder to do.

Last night was particularly bad. I have eczema, and am in the middle of another bad flare up. I spent the entire night itching all over, or so it seemed. Miserable is the only word to describe it. I tossed and turned and tried not to scratch myself raw.

And now I'm headed to work on almost no sleep. Should be a lovely day.
Posted by Jennifer at 6:07 AM 5 comments: