It's Halloween night and we're all prepared with candy. 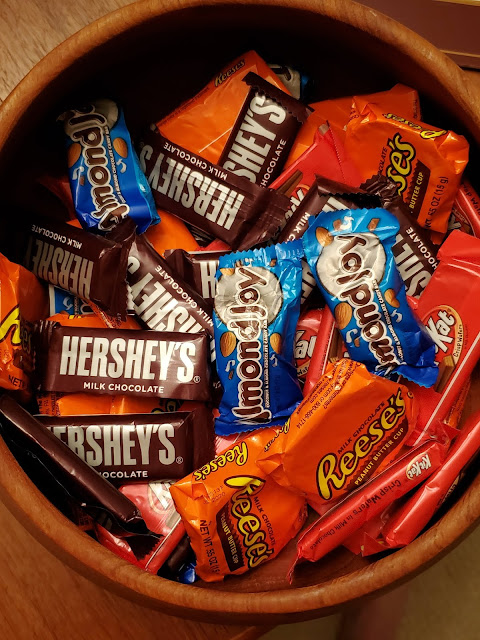 Although we've only had one single trick or treater all night. And she's too little for candy.... 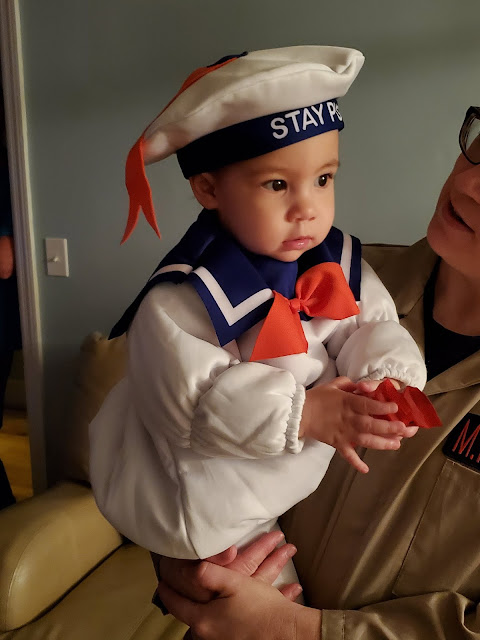 She's so cute, though, that I don't mind that she's the only one! Mom and dad are dressed as Ghostbusters.

The view from my front door, and from the back porch. 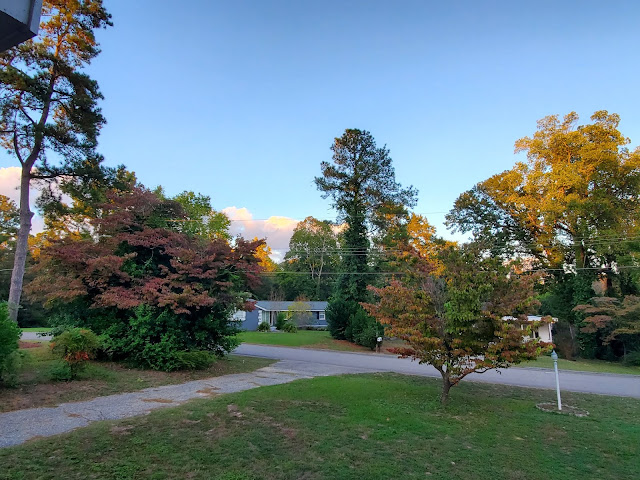 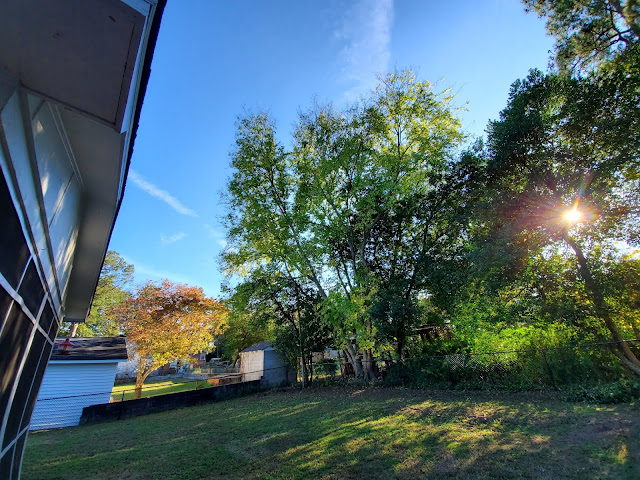 Me and little P.

It's such a nice day here today. I say that knowing it wouldn't be to everyone's taste, as it's chilly and cloudy and damp. Rain showers come and go, the remnants of that oddly named tropical storm, Nestor. After the long hot summer with very little rain, a chilly autumnal day feels great to me. Last night I was forced to turn on the heat for a little while, something I'd sworn I wouldn't do within days of using the a/c for the last time, but the damp was making me shiver.

This weather is perfect for a stay at home kind of Sunday afternoon. I'm going to attempt a crockpot potato soup recipe I found online. Here it is if anyone is interested:

Ingredients:
1 30oz. bag of frozen diced hash browns
1 32 oz box of chicken broth
1 can of cream of chicken soup (10 oz)
1 pkg. cream cheese (8 oz, not fat free)
3 oz bacon bits
1 cup shredded cheddar cheese
salt and pepper to taste
Directions:
Put the hash browns in the crockpot. Add in the chicken broth, cream of chicken soup and half of the bacon bits. Add a pinch of salt and pepper.
Cook on low for 7-8 hours or until potatoes are tender.
An hour before serving, cut the cream cheese into small cubes. Place the cubes in the crock pot. Mix a few times throughout the hour before serving.
Once the cream cheese is completely mixed in, it's ready to serve.
Top with cheddar cheese and some additional bacon bits.
Enjoy!

While my soup cooks Martina is coming over for a while. We've been planning to do a craft project together for Halloween/All Souls/Days of the Dead. The original idea came from this link from a long abandoned craft website:  http://theanticraft.com/archive/samhain08/altar.htm We're going to make our own ancestor altars this year, although ours won't be nearly as detailed as the one in the link. The supply list for it is as long as my arm and neither of us have that much time or money to blow! We're just using it as a starting point for inspiration. I will, of course, eventually share pictures of our completed ofrendas here on the blog. I'm looking forward to spending some time with Martina making them, too. It should be fun.

Have a happy Sunday, everyone!

I've received some wonderful gifts and happy surprises in the past week. I'm so very fortunate in life to have many, many wonderful friends! First up, from Parsnip in Tucson: 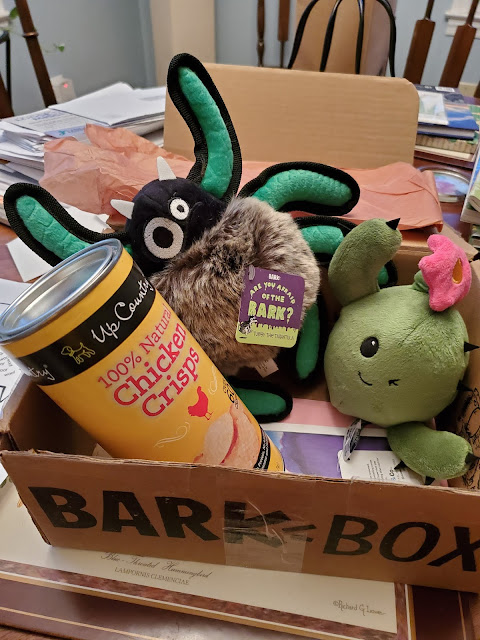 A care package for Ginger and George! They love the chicken crisps (she's sent them to our lucky canines before) and George loooooooooves new toys. He's been hoarding both of these in the dog bed and he barks like mad when Ginger grabs one of them. Which she does strictly to annoy him; she's never been big on toys but she delights in anything that bothers George. (As you've probably surmised, she's feeling much better!) Thank you so much, Parsnip. You're a thoughtful and dear friend.

Next: I won a book giveaway for the first week of October from the delightful Rue! Her Great October Book Giveaway is an event to look forward to each year. Pop over to her blog if you're interested and leave her a comment for a chance to win a magical/Halloween/Samhain themed book! This is what the package that arrived looked like: 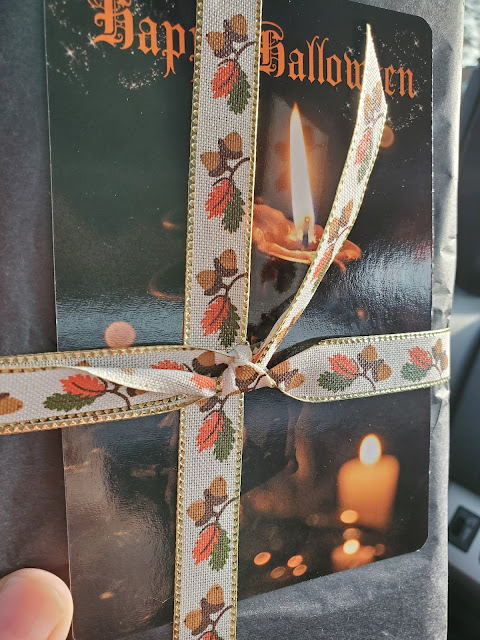 And here's the book I got, which is very serendipitous considering a craft project that I'll be starting next week (more about that later!!)…. 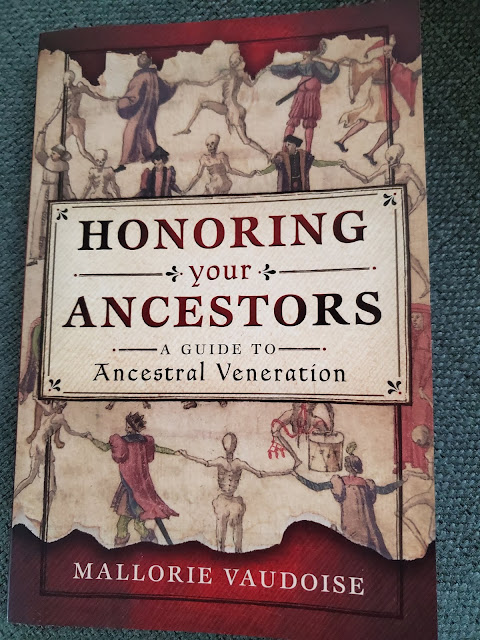 On Sunday morning I texted Marla just to say hello, since what with one thing and another we hadn't seen each other in a couple of months. We decided to have a little impromptu visit that afternoon and she showed up about 4pm with this little cutie-pie: 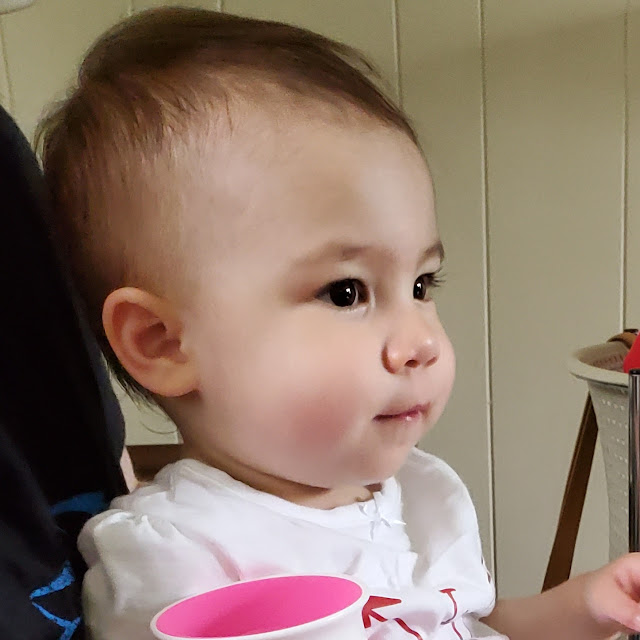 Isn't she precious? I love those pink cheeks and big brown eyes. It was so good to see little Carsen, who's already walking and talking. Man, that happened fast! 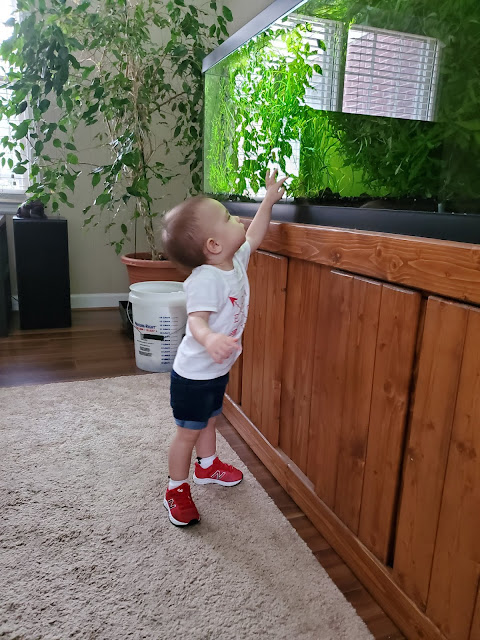 She's been fascinated with our aquariums since she was a tiny thing. Speaking of Carsen and tiny things...…….we had a small house sparrow that lived with us for over a decade named Chip. After Chip died a while back Marco stopped saying his name....until Carsen came along. He's always (and consistently) called her "Chip". Every time he sees her, he says, "Hey Chip! Heeeeyyyy Chip Chip!"  I guess in his mind Tiny Bird = Tiny Human. How cool is that?

After Carsen spent about 30 minutes here, her daddy came and picked her up and took her home so that Marla and I could have some baby free time to hang out. It was so much fun! We got caught up and we even had wine together for the first time in two years! Marla didn't drink while pregnant, of course, and after that she was too cautious to even have a small glass of wine while breastfeeding. I totally respect her for that, but I'm glad we can finally have drinks together again! My new back porch was just made for wine and conversation. It was so very good to see her. :)

All of these happy surprises really helped lift my spirits after several weeks of stress and unhappiness. Things are feeling much lighter around here!
Posted by Jennifer at 6:01 PM 14 comments:

I had to stop and take more pictures when I was leaving school today. Those zinnias out front are still blooming like mad and butterflies were everywhere. Granted, the bottoms of some of the longest flower stalks are looking brown and dried up, but there are still lots of fresh new blossoms around. These flowers grew from seed and started blooming in May and here it is, October. They looked great all through the heatwaves and drought of the summer when lesser flowers would have given up the ghost. I must grow zinnias next summer!

There were about 10 butterflies enjoying the flowers and the sun when I took these photos. It's a nice way to end the workday, walking past these beauties....
Posted by Jennifer at 6:12 PM 16 comments: 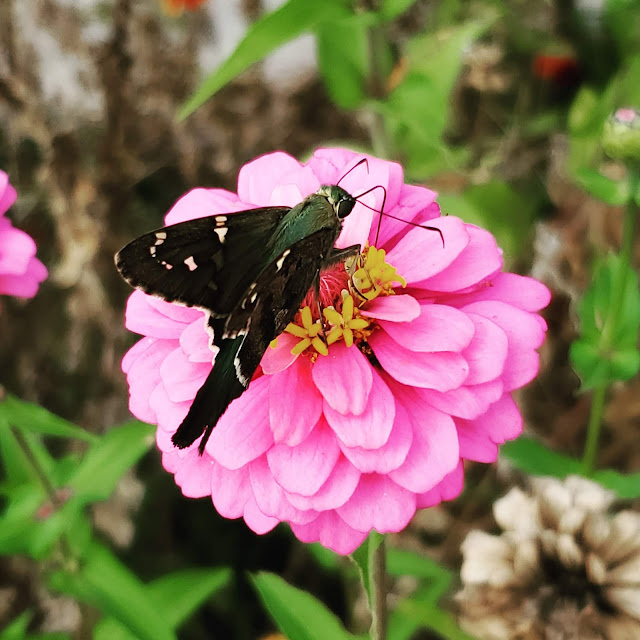 The zinnias in front of our school just keep going and going. I snapped this photo yesterday afternoon as I was leaving work.

Things are getting better around here. The cloud is slowly (slowly) lifting a little. For once I have some good things to comment on!

Ginger has improved quite a bit. Except for a slight residual head tilt, to look at her you wouldn't know anything had ever happened. And you'd have to be looking for the tilt to notice that. Martina came over yesterday and told me that if she hadn't known what had happened with her, she wouldn't have any idea something so dramatic had gone down. Martina works as a veterinary technician so she's used to looking for health issues in dogs. We've also noticed Ginger get slightly off balance a time or two while out for short walks, usually when she's walking up onto the shoulder of the road. We're hopeful that these two minor things will resolve given a little more time. Today we're trying her without the motion sickness pill for the first time to see how she handles it. Of course, I'll be here all day to give her one if she gets dizzy or sick. Cross your fingers for us that she'll be able to discontinue it!

Martina came over yesterday to see Ginger, but also to take me out to the movies, her treat. She had gifted tickets left over from her birthday in July. We went to see Downton Abbey (something neither of our husbands cared to see) and we had such a good time! It was a lovely little escape from reality and very much needed. We're both fans of the original show.

Later this afternoon I'm going for Mexican food and margaritas with a few women from my book club group. We're celebrating the fact that one of the Karens finally landed a new job. It will be nice to have some time to catch up with them and I'll be back home early enough that Gregg and I can spend some time together doing the classic "Netflix and chill" thing! A night spent at home when (hopefully) nobody is sick or depressed sounds really good to me.

What kind of good things are going on with you this weekend?

Back in 2016 I entered John Gray's novelty vegetable competition that he always hosted on his blog during the Trelawnyd Flower Show. I had some overripe peaches on the counter and their vivid orange color reminded me of a certain insane Republican candidate for president. Little did I know when I created what I called "Impeachable Trump" that the man I still considered a joke at that point would go on to become the most horrendous president in U.S. history. And now, lo and behold, he's in office and about to get impeached!

Did my creation call this situation into being?!?! And if so, my next one will be a rotting peach in a prison cell!

Here's the post and picture that John shared on his blog that day:


It's 1.30 and I've just got home. The results are comming in and it's looking like "leave" winning at the moment....
I will leave you with a cracking novelty fruit entry from jennifer
Donald Trump out of peaches!