For those who have asked to see some of our aquariums, here is a link to one of the videos I've uploaded to YouTube. It's a peek into our 120 gallon planted aquarium. I focused entirely on the bottom of the tank where, as you will see, a whole lot of catfish live peacefully together. Enjoy!

*** Quick FYI....the plants are much more natural shades of green than you would think by looking at this video. The angle of my phone while I recorded it made their colors look a bit "off". Also, you can hear George barking outside for background music!
Posted by Jennifer at 12:00 PM 15 comments:

One of the science teachers at our school recently won a $1000 grant to establish an apiary at our school, and the bees arrived last weekend! Here is a photo of the teacher getting them settled into their new home, with the principal helping out:

This science teacher is the lady I get the delicious eggs from. She's also in charge of the 4H club at our school, and along with another science teacher (the head of the Environmental Club), she's doing so many wonderful and interesting things! Here is a what I wrote on the school's social media pages about the apiary:


This past weekend Mrs. Howard's bees arrived! We now have an apiary consisting of two nuc-sized colonies (nuc-sized contain 5 frames of bees which fit perfectly in the new observation hive). Students will have the opportunity to observe bees up close and how these important pollinators benefit the gardens.
Sneed Middle School is a Green Steps Certified School. The Environmental Club has established two pollinator gardens and a certified wildlife habitat. The 4-H club has a raised bed garden and has also been learning about growing foods hydroponically (foods produced are donated to Harvest Hope Food Bank). The addition of our bee colonies will benefit these programs greatly!
Thanks again to Mrs. Howard for writing the grant proposal for the new apiary and her dedication to providing new learning opportunities for our students!
Also thanks to Ms. Cagle for helping to settle the bees in their new home!

I feel so fortunate, still, to have my job! Every day is interesting and fun for me. I'm looking forward to watching the hive mature and (hopefully!) thrive.

I couldn't resist picking some pretty flowers for our table today. 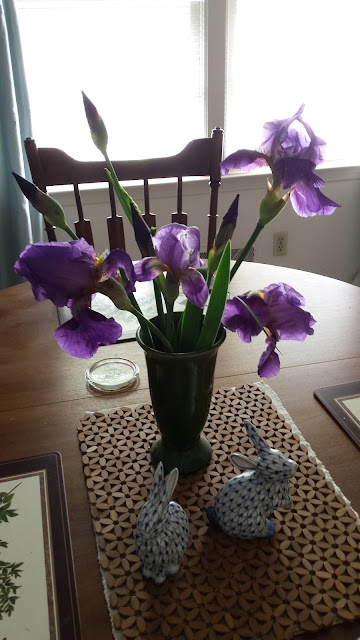 I don't know what's gotten into the kids at the middle school, but they've gone crazy this week. I had over two dozen discipline referrals to process this afternoon and ended up staying late to work on them. I enter all the suspensions, detentions, expulsions, etc into a large spreadsheet each day and send it out to the whole staff (so they'll know where the kids who are in trouble are the next day when they take attendance). I also set up automated calls each evening for parents who need to be notified that their kid got in trouble and also that they are required to come to the school for a conference. The upshot of all this is that every single discipline referral gets sent to me for processing, so I know about all of the bad behaviors in the school!

Usually there's only a scattered few referrals to deal with each day, but this week has been insane! Today alone there were about thirty incidents. And to give you an idea of what most of them have been like lately, here are 3 random examples from today:

Kid #1: Raised his hand at the teacher as if to backhand her across the face....because she was calling him down for something.

Kid #2: Gave his teacher "the finger" when she grilled him about his missing homework.

Kid #3: Her gym teacher told her to hand over her cell phone (they're not supposed to have them out) until the end of class. She threw it at him.

These are just the "minor" behavior problems that came up today. There were a couple of very bad fights (between girls, no less!) and other things that were more serious.

I would have feared for my life if I had treated a teacher like that when I was 13 or 14 years old! I'm stunned at these kinds of behaviors. I'm not sure why things have gotten so wild since we got back from spring break, but the experienced staff and teachers tell me that this is common. I'm so glad I'm not a teacher! I get to read about the wild things that happen, but I don't have to deal with it directly. Teachers don't get paid nearly what they're worth!

Blooming in my back yard today.... 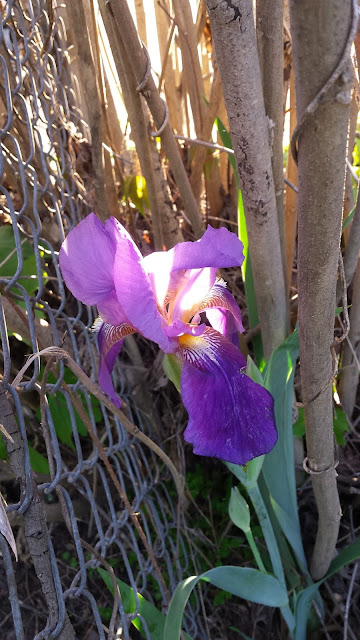 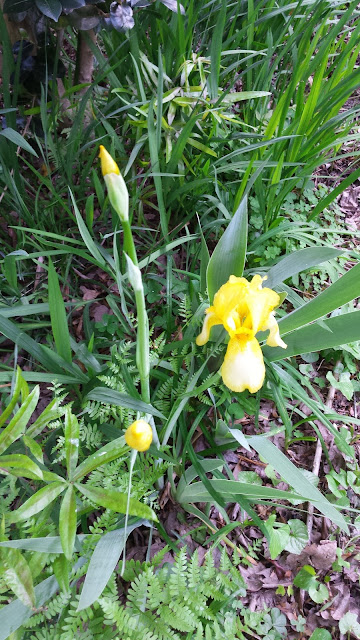 A line of fierce thunderstorms is headed our way. They say we're in for strong (40-60mph) winds, heavy rain, and the possibility of both hail and tornados. I don't mind at all; in fact, I kind of enjoy big storms, provided no one gets hurt and there's no real damage. Our dog Ginger, on the other hand, hates bad weather and will go curl up in a corner of the laundry room and refuse to move if it even rains hard. We hate knowing she's scared....but we may have found a way to help her!

The owner of the pet store where Gregg works went to a trade show in Atlanta recently and brought back all kinds of freebies and samples. Among them are these treats that he gave Gregg to bring home for the dogs:

If the storms that hit tonight are bad and Ginger gets scared, I'm going to try these out on her. Will she get stoned and mellow? Go to sleep? Get extra hungry for treats? All of the above? We shall see!!  I'll report back tomorrow in the comments, if you're curious.

The color of sunshine

A yellow iris popped up in our yard the other day, and it was a complete surprise. In the seven or eight years we've lived in this house, I've never seen an iris in any color besides purple.

In the afternoon light it looked like a spot of pure sunshine on the ground earlier today. What a beautiful color! 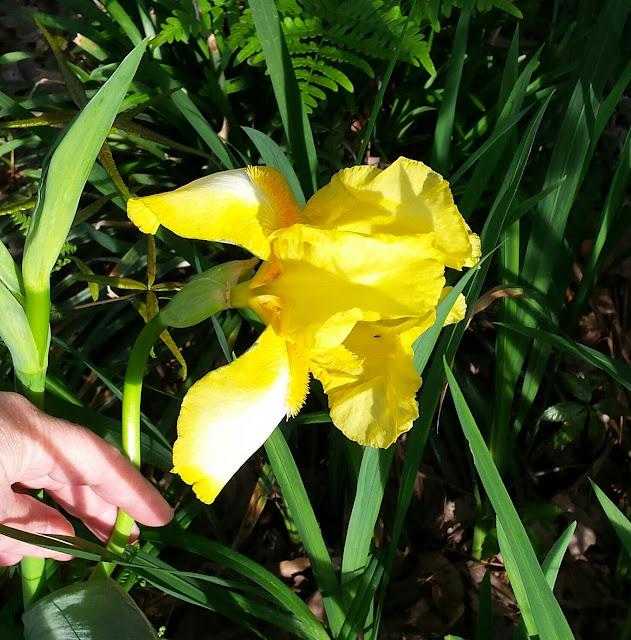 This week has been my first spring break vacation since I was a kid. It feels wonderful to have so much time off around every major holiday. Once school starts back on Monday we have exactly 8 weeks left in this school year, and then I'm off for the entire summer! Not only that, but I will have finished my first year at this job. I'll be signing my contract for next year sometime in May. It's crazy how time flies!

It's been a really productive week at home. Since we owe a big tax bill mid-month, we're being thrifty and trying to avoid too much unnecessary spending until it's paid. I purposely avoided doing anything that would cost money during my break, and chose to concentrate on spring cleaning and various household chores. Gregg was off on Easter Sunday and the next day, and we got the biggest chore done that had been weighing on our minds for months--changing three of our aquariums and switching the fish in some of them. It was a huge task that involved two 120 gallon tanks, one 90 gallon tank, a 40 gallon tank, and probably 100 pounds of (former) live rock for aquascaping. Our African cichlids, dozens of small bristle nose catfish, and a large blood parrot cichlid all had to be moved lock, stock and barrel. Fortunately, Gregg is an expert and it all went smoothly, it just took a lot of time. The newly set up tanks look great and the fish have all adjusted beautifully--and it's such a relief to have it done!

When Gregg went back to work on Tuesday I spent several hours each day for the rest of the week doing house cleaning and chores that I normally don't get to. I cleaned and organized the kitchen cabinets and shelves as well as some of the bedroom dresser drawers and one closet. I brought out a step stool one day and cleaned ceiling fan blades, windows, and anything else that's normally out of reach. I repaired (glued) three broken tiles in the main shower, dragged Marco's cage outside to give it a really good pressure wash/cleaning, and replaced the blinds beside his cage that he had chewed on and ruined. I mopped and vacuumed and did some badly needed shopping trips.

There are still a couple of small chores I'd like to do today and tomorrow, but for the most part, I'm done. This afternoon and tomorrow are it for my break and I want to relax some, too. I have been reading two new books this week, one because it's a book club selection for this month and the other because it looked interesting to me:

It's been crazy reading both at the same time: one is set in ancient Rome, the other in a future dystopian post-apocalyptic America. How's that for a contrast?

In other news, I found a house on the local real estate websites that stole my heart. We're looking to buy a house later this year if we can find the right one, and this one is so close: a big wraparound porch, large rooms with original hardwood floors from the 1930's when it was built, two fireplaces, large bedrooms one of which opens up onto a second floor balcony overlooking the backyard...and speaking of the backyard, it's almost a half acre lot with a privacy fence surrounding it. I love it, and when I showed it to Gregg, he loved it. He said, "I wish we could move in tomorrow." But then he pointed out two or three reasons why it would be impractical for us, despite being reasonably affordable. And he's right...there are two key problems with the house and there's no getting around it. But still. It's the first house I've gotten really excited about after looking at hundreds and hundreds of listings. I wish we could schedule a viewing and have a look at it, but I'm afraid I'll like it even more if I see it in person. It's probably best forgotten.

That's been my spring break...a lot of cleaning, daydreaming about a home of my own soon, and two books to carry me away. Not bad...not bad at all!

What have you been up to this week?

A walk in the woods

Yesterday Gregg and I took advantage of the day off together and the beautiful weather and took the dogs for a walk in the woods around Jeffries Creek park here on Florence. Spring is in full swing down there. We saw pond turtles, ducks, and (luckily) no snakes! 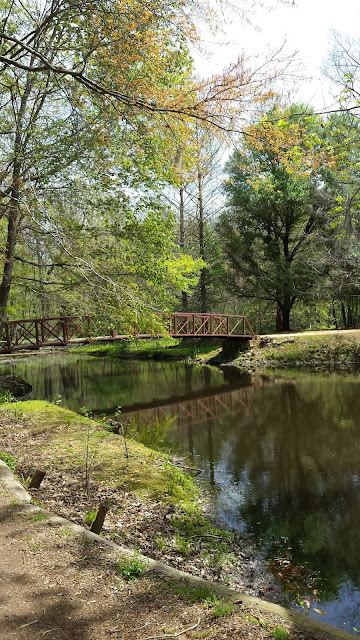 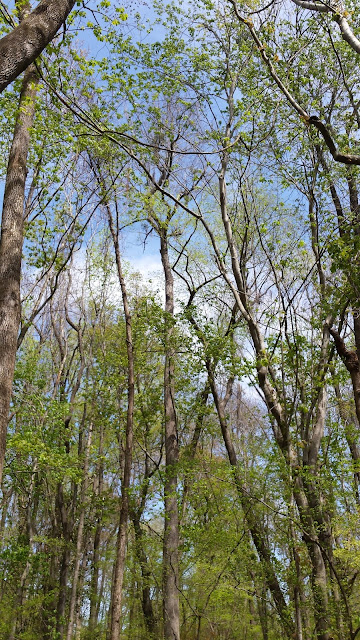 An Easter treat for John!

I made Scotch Eggs for the first time today and they are delicious! I found a video by "Chef John" over at Food Wishes and used his recipe and method.  They turned out perfect! Look what I did, John Gray! 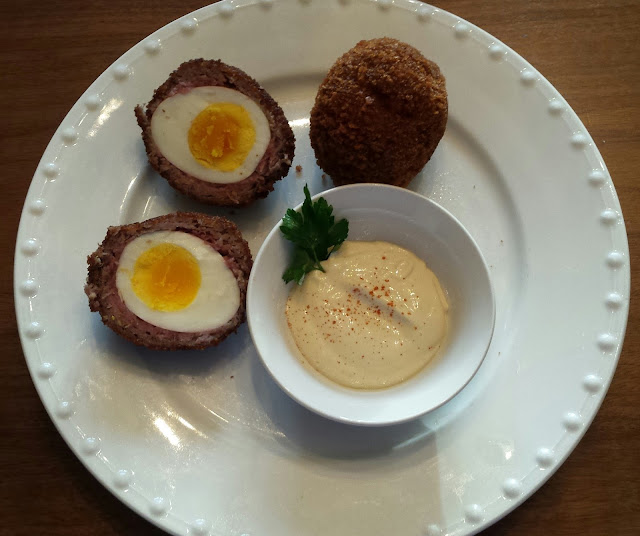 Happy Easter, everyone!
Posted by Jennifer at 7:03 PM 23 comments: