Last night marked the third anniversary of the evening I arrived home from work late, with bags of Thanksgiving groceries, and discovered a puppy hiding under a chair on our back porch.

I wasn't exactly thrilled at the time, either.

Husband and I had lost a beloved Cocker spaniel a few days after Christmas the preceeding year, and were still grieving. He was the sweetest, gentlest little old man in the world (he was almost 16 when he died). I had been nearly overcome with grief. We vowed it would be a "long, long time" before we got another dog. We were worn out, emotionally and financially, from the strain of caring for an elderly dog. Not again, not for years, we decided.

Then came the following Thanksgiving Eve, and we were living out in the country, and apparently it's common practice out there to "drop off" unwanted puppies. This was a slightly scrawny, appromoximately 6 month old female, obviously used to people, that just "appeared". What kind of jerk abandons a puppy on Thanksgiving Eve? How heartless can someone be? Actually, it turned out to be the best thing they ever did for her. After about a month of looking for a good home for her (to no avail), it became obvious that we now had a dog. :) That Thanksgiving puppy was none other than.......Ginger, of course! What a great gift she turned out to be. She is a wonderful dog. A Thanksgiving Blessing, disguised as a little unwanted scrap of a dog.

Happy Anniversary little girl! We love you!
Posted by Jennifer at 4:28 PM 1 comment:

Email ThisBlogThis!Share to TwitterShare to FacebookShare to Pinterest
Labels: Ginger

The View From the Window

This is the what the trees in my backyard look like as seen from our bedroom windows. 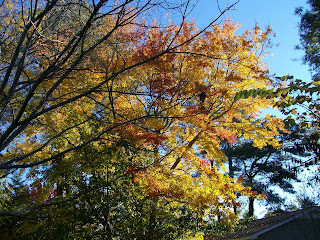 The bare tree in front is a black walnut, which did not produce many nuts at all this year. I wonder if they are like pecan trees, in that they have "off" years regularly. I grew up around pecan trees, but this was my first experience with a walnut. I immediately noticed a slight difference in the foliage from a pecan, in that the pattern of the palmate leaves seemed...slightly different. As though they were placed in more circular patterns and the leaves seemed ever so slightly rounder. I had hoped to gather some walnuts this fall, but the few that we saw on the tree this summer seemed to just disappear. I imagine the squirrels got some. There was a momma squirrel this year that had a big nest in the walnut tree and lived there with her two babies. I believe a hawk killed one of the youngsters, but the other is still around and likes to run along the top of the privacy fence with Ginger bounding along below. They play together, which is kind of funny to watch. My crazy dog has squirrel buddies!

The perennial herb garden that I've planted seems to be doing well. The herbs that were in pots have perked up some after getting more room in the ground. I gave them a good layer of mulch and they seem to be reveling in their new beds despite the cold nights. I was able to finally plant my strawberry plants that had been living in pots for two years now. I think I will grow some edible flowers among the herbs next summer...such as nasturtiums. I also would like to buy some huge containers to plant various mints in (I don't dare put any mint into the ground with the other herbs...mint is always a bully!) I would also like to find some different varieties of sage to plant. I could start them from seed and have a great selection, but perennials take forever to grow out! I want plenty of herbs by next summer!

Speaking of herbs, I am so glad to have lots of rosemary that survived the move, and plenty of sage as well. Thanksgiving is almost here, and I love sage and rosemary with any roasted meat, potatoes, and mixed with real butter. This year Thanksgiving will only be me, Husband, Ginger, and Marco so I have not decided what to cook yet. I would like a simple, but special, meal for two that won't be too much work...any ideas? Suggestions?
Posted by Jennifer at 11:37 AM No comments:

The Comforts of Home

Yesterday was a perfect autumn day here in my little part of the world. Chilly, damp, overcast, but with bright piles of leaves everywhere and trees still sporting plenty of their autumn finery! A perfect day for curling up with a cup of coffee, my knitting, and an NPR podcast to listen to on the computer. I am working on a tiny hat for a coworker's baby girl. It's a gorgeous hand painted merino yarn, in sock weight so it's taking forever to finish. The bamboo needles I'm using look like toothpicks! But it's going to be worth it. The merino is super soft and the colors remind one of the beach...soft blues, sand, and coral. Perfect to match the baby girl's big blue eyes!

I love days like that. Even though the sun is out this morning and the colors outside of my window look brighter in the sunlight, I love overcast winter days when the urge to hibernate comes over me. A good book, knitting, warm drinks, comfort food all enjoyed in a cozy house...these things make me feel content. 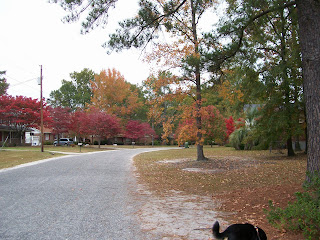 I did take Ginger for her morning walk, and captured a few photos of our street right now. We had to duck under the slide at the park to escape the rain one time! Thank goodness it only lasted a few minutes.
Posted by Jennifer at 8:12 AM No comments:

What a week! I went back to work from vacation, only to find out that my boss was coming into town in three days. So my first days back were loooong...12 hours or more preparing. Then my mother in law called...and invited herself (and her husband) to spend the weekend with us! Now, I love my MIL but I detest last minute company. So we had to immediately start preparing for her arrival. Then to top it all off, my assistant at work called me last night to tell me that a temporary holiday hire had showed up to work drunk. Sigh. So I had to go back to work last night, fire the lady, and then work in her place. (This took away cleaning time I had counted on to get ready for the MIL!)

Now I have to work a half day, race home, finish cleaning, and go grocery shopping. Company will be here by 5:30 pm. Then I have to work the entire weekend, while entertaining, because I didn't have enough notice to get the weekend off.

Needless to say, blogging (as well as everything else) has had to take a backseat to the chaos that is my life right now. I had a great vacation, but now I need another one!!!
Posted by Jennifer at 8:04 AM No comments: 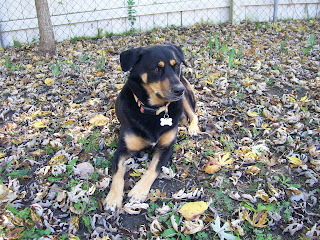 Ginger loves this time of year. She thinks raking leaves is big time fun...because she chases the rake! She dances around, jumps forward, backs up, runs in circles, and dives into piles of leaves with a big doggy grin on her face. She also loves to chase squirrels. I swear a few of them know her now and purposely play with her! I don't think she would ever hurt them. She just loves to chase the little rascals! Lately they have been digging holes and stashing acorns in the back yard. If she sees them bury one, she will go immediately dig it up. I'll bet the squirrels hate that!

Oh, to have the carefree life of a well loved dog!
Posted by Jennifer at 10:42 AM No comments:

We are getting an early start to winter this year. November has begun with temps at night dropping down into the 30s after chilly, drizzly days. Tonight we should be getting our first frost.

Husband and I have been on vacation this week. The camping trip did not work out (too wet) but we've had a great time relaxing at home and tackling home maintenance stuff we usually put off. And I got my herb garden started! It's not much to look at yet, but this spring it will be nice. So far I have planted lavendar, sage, feverfew, rosemary, thyme, and strawberries.

The color here is at it's peak right now. I will post pictures at the beginning of next week.
Posted by Jennifer at 1:41 PM No comments: