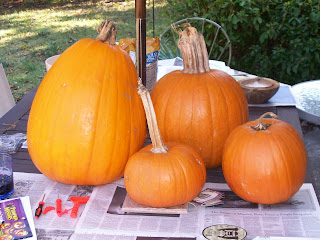 This is a "before" shot of the pumpkins my friend M. and I carved. She was the only one able to come to my house for a carving party. One other friend had tickets to a football game in Charlotte and the other had to attend her little niece's birthday party. Still, M. and I had a great time Sunday afternoon even if it was just a party of two! We drank hot mulled cider with rum while we worked, and carved two pumpkins each. 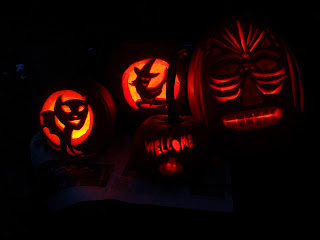 The Tiki god pumpkin is mine. I drew a stencil with a picture from "7 Tiki" brand rum as my inspiration. The rum comes with a little booklet around the handle that has pictures and descriptons of seven gods from the South Pacific. I tried to recreate "Kalougata Atua", "The Spirit of Unknown Fates".  This god, according to South Pacific legend, is the master of all our fates.  He decides our fortunes, good or bad.  He is also believed to be a talisman of good luck, and the wisest of the gods.  Well, I hope he's not offended that he ended up looking like a cat thanks to my superfly mad carving skills! hahahah. I didn't quite mean for that to happen! 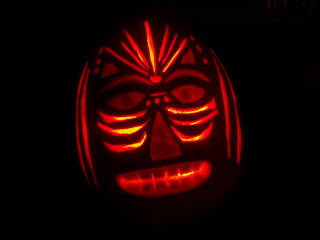 I originally intended to have some pumpkins carved like skulls around him, as well as a bowl of dried apple shrunken heads. As usual, my ambition was beyond what my free time allowed. Maybe next year. The rest of the pumpkins we carved from store bought stencils (and we used the really safe cheapo tools that came with them--no use taking any chances while drinking rum punch!). 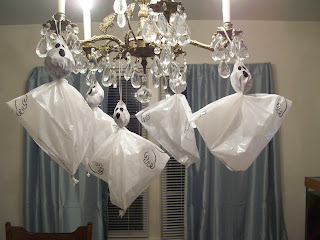 These guys were just hanging out in my dining room. Boo! 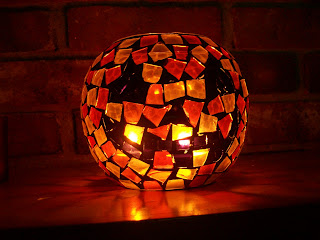 This little dude made the mantle above our fireplace cheerful!! 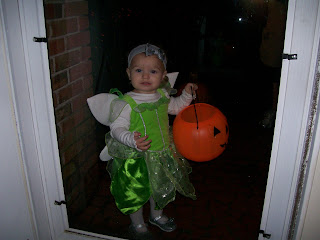 My friend M.'s beautiful little girl!  They surprised us by stopping by. When I heard the doorbell ring and found this little fairy standing there I had to grab the camera and capture the moment! Isn't she adorable?  She was by far my favorite trick or treater of the night! Overall we had a poor turnout of kids--only about a dozen showed up--but it was pouring rain all afternoon up until 5:00, and was also very cold. I heard that the trick or treat event at the mall was a big success. I guess people were looking for a warm, dry place to take their kids! Still, the handful we did see were awesome, there were some really good costumes this year. And I had big treat bags stuffed full of Reese's cups, Nerds, Laffy Taffy, Twix bars, and puffy foam stickers of pumpkins and ghosts to reward the ones that braved the weather and came out.  It was lots of fun!  I have too much candy left over, though. I'm planning to take it to work today to get rid of it.  I know what will happen if I don't!


I had a great time on Halloween.  Earlier I worked at the information desk at the bookstore, and I wore my homemade witch hat all day!  M. helped me trim it Sunday night after we carved pumpkins.  It was a plain black hat from Target (the only hat that fit my big head!) so we added a ribbon of dangling bats and purple beads to the brim, and a filmy veil with purple sparkles in back.  I got several compliments on it, and it was fun to make! 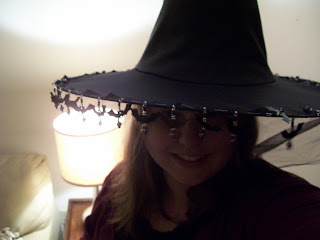 I hope everyone had a wonderful holiday, filled with magic and fun!  I can't wait to catch up on all the final countdown posts I have yet to read, and big thanks to Danni over at http://thewhimsicalcottage.blogspot.com/  for hosting the 2011 Countdown to Halloween blog party. It's been a blast!
Posted by Jennifer at 12:07 PM